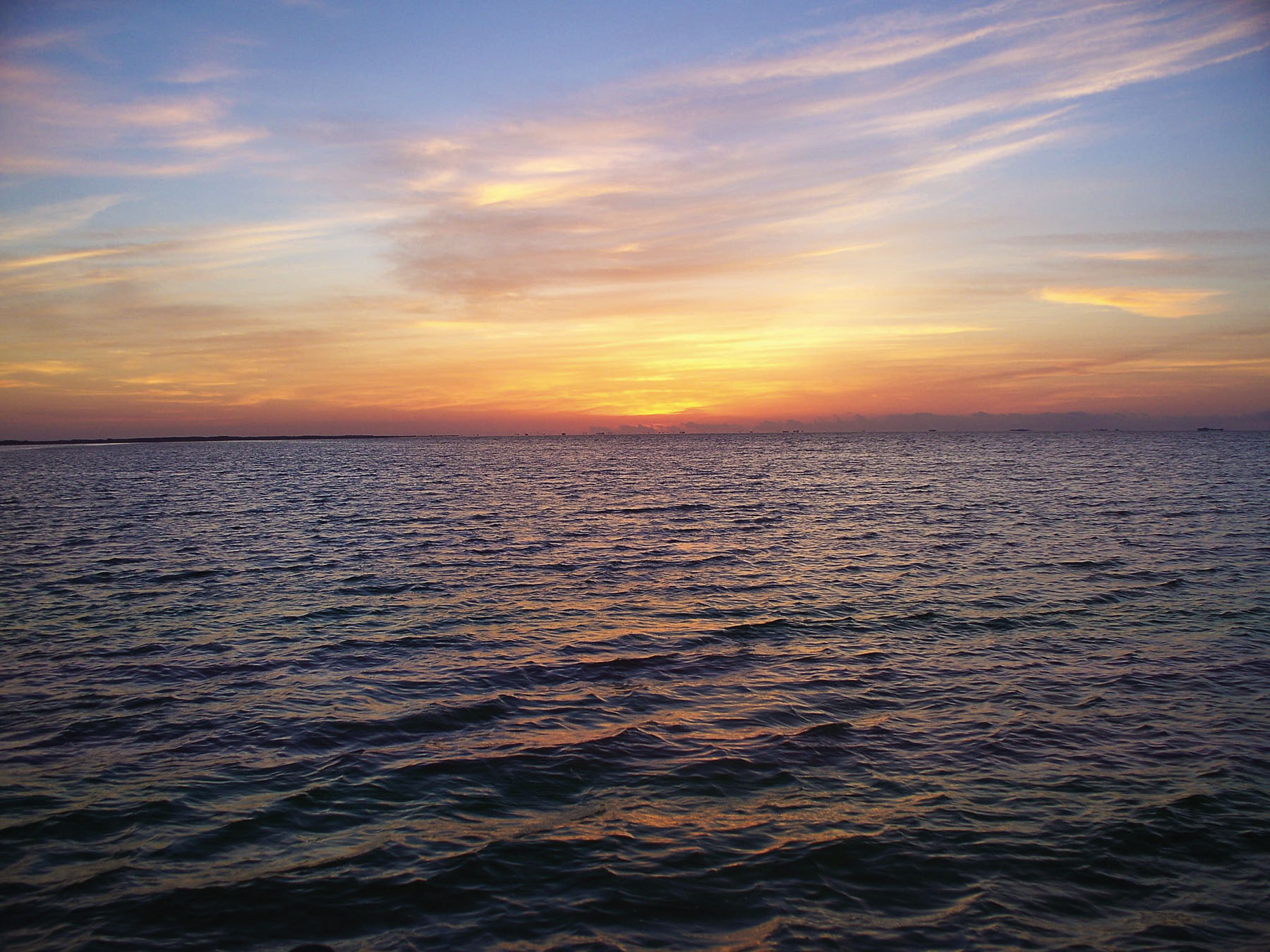 The sunrise photo included here is the view from my office a few days ago at Tide Gauge. I thought it a fitting start to this month's article. The beauty of a coastal sunrise is something too few have the good fortune to enjoy. Mornings such as this will become more common as we get further into summer weather patterns.

In our last issue I spoke about how wind can be your friend and the second photo here is proof. Wind-sanded water along a normally crystal-clear shoreline made this trout easier to catch. This was my first eight-plus in Aransas Bay for 2010 and I am always excited to see such quality fish still roaming my home waters.

As the winds of spring fade and the heat of early summer pushes the thermometer to the 90 mark, deeper structure becomes my primary target. Decreasing wind allows us to leave the protection of shorelines and venture into the open bay. From northern Aransas bay all the way to East Matagorda you can find mid-bay reefs. Many of these come within a foot or less of the surface but can be surrounded by waters as deep as 8 to 10 feet. Luckily most of the reefs have a more gradual drop so stepping off the edges will not put you in water over your head.

Oyster reefs supply structure upon which fish can stage and also attract a variety of forage. Crabs, shrimp, and many species of finfish make the shell their seasonal homes. Mullet and menhaden are usually abundant around mid-bay reefs. Mullet schooled on top of a shallow reef at daylight tell us that predation during the night has most probably forced them to be there. If you pull up to your favorite reef and there are no mullet in sight I would suggest you go to your second favorite reef. NO BAIT typically means NO FISH.

All mid-bay reefs have two important points, a beginning and an end. Reefs that begin at the shoreline may extend a mile or more offshore; Panther Reef is a good example. To get started, I suggest locating the end of the reef with the most bait activity. Current and wind come later, we first have to locate the food source. I bet many of you have grown tired of hearing me stress the importance of bait but honestly I don't believe I can stress it enough. Finding bait over or around the seasonal structure you plan to target is critical to your success. Notice I said season not day. Different structures for different seasons, but that is another topic.

Next to finding no bait, "crunching" the fish off the reef is the second most common mistake. Walking on shell produces a crunching noise and I figure if I can hear you crunching then the fish darn sure can. I am pretty sure most of the trout flew the coop before you made a cast. My dad taught me to avoid the shell and walk on the sand or mud as much as possible. Most reefs have enough shell or mud around them to allow this tactic and, luckily, this is also the zone that quite often holds the most fish.

I position my boat on the end opposite of where I believe the fish will be and for sure you want to fish your way to the chosen area verses simply walking. Fish do unexpected things so be prepared for a strike at any moment when working mid-bay reefs.

Do you know a bay that does not have a reef named Half Moon? There may be one somewhere but all ours do. The reason many reefs resemble a crescent is the way wind and current shape them. Another common trait is that one end is deeper or has a more severe drop and this too is caused by wind and current. I prefer to fish the up-current side of a reef when conditions allow and this means we often have to throw into the wind but this side will usually hold the most and best fish.

Wade-fishing on shell reefs is a continuous learning thing due to changes created by storms and oyster dredging. I have more than once stepped into a deep hole on a reef I thought I knew like the back of my hand. These holes form hiding and staging zones for bait and predator alike and I'm always happy to find one but without a dunking first thing in the morning.

Copano's reefs were the first oysters my old Converse basketball shoes ever touched. In the good old days our coaches always seemed able to find a kid a "slightly" used pair for fishing purposes. I can still see my dad in old khakis and white T shirt wearing a pair of those Converse shoes standing thigh deep on Lap Reef, grinning and pulling a 52M 19 Mirrolure from the yellow mouth of a solid trout. There were lots of two to four pound fish to be caught in the early 70's when the winds allowed us to wade the middle part of the bay. Anyway, you need to pay close attention to the details of each and every reef that you wade.

Some reefs have narrow spines with sharp drop-offs and others are more broad-topped and might have a shallow belly or two somewhere within the formation. Then there are those with pronounced cuts through them. These I reserve for the extremely hot days of late summer. Tidal movement is a must for this situation but again, another article and another time.

The first few days of calm will yield the best fish. For some reason, the larger fish seem to get wise to us after a few trips and make themselves scarce. Fish from sixteen to eighteen inches can still be found in good numbers with a few over the twenty mark on each outing.

A wide variety of plugs will work over shell. Some might find it hard to believe that a diehard soft plastic man like me throws plugs but I also use a variety of the Mirrolure line. The Catch 5 and Mirrodine XL work well over the shallower shell and the 52 MR works best for me in the deeper stuff. What ever happened to chunking a 1/2 ounce gold spoon with a yellow or white bucktail? I used to catch truckloads of big trout on that setup. I swear I am a going to tie some bucktails and see what happens over the shell this season.

So when the wind finally lets up, and I promise it will, get out in the big water and find a reef with some bait around it and see what happens. Try not to crunch the best fish off by stomping down to the end where you've seen the most bait. Being quiet on the shell will pay dividends I assure you.