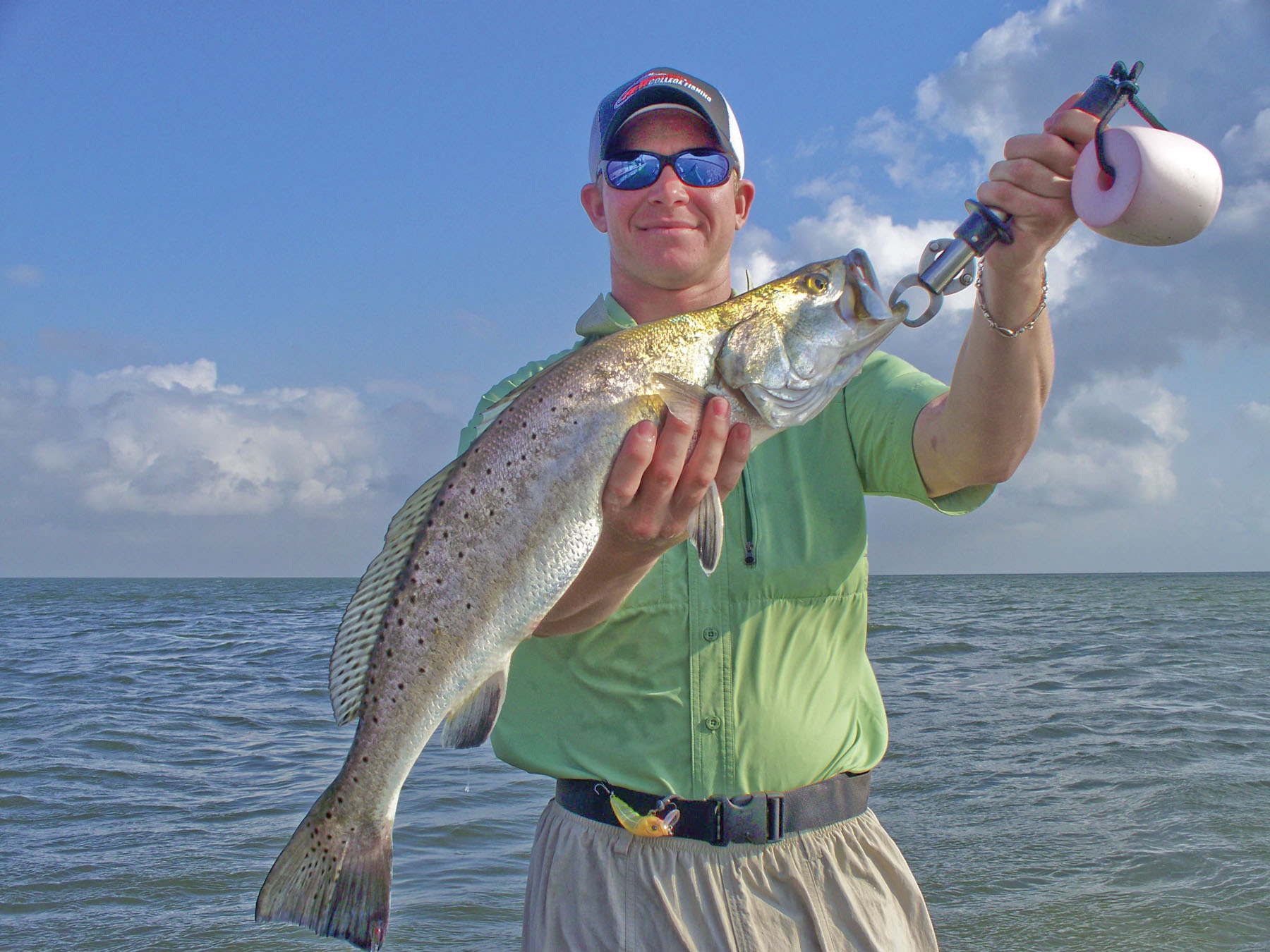 Ryan with solid trout caught over shallow submerged grass with slicks during a unpredicted lull in 30mph winds.

Even though we have experienced numerous days during April and May with sustained 30-mph wind gusting into the 40s, it's not over. June is often another windy month along the middle and lower Texas coast. Good news for those fishing the Rockport area is the amount of wind much of the Aransas system can handle. A combination of the layout of the bay and barrier islands coupled with abundant seagrass and coarse white sand helps retain water clarity. Even with strong south and southeast wind our leeward shorelines can be almost too clear and similar water clarity can be found at times along windward shorelines. The wind is definitely our friend as long as we know how to use it and trust our fish finding instincts. Since June is a kick-off month for lots of anglers due to schools letting out I thought it might be a good idea to throw out a couple of suggestions on the positive effects of the winds and fish finding.

I know, it sounds ludicrous to refer to 25-plus mph wind as a friend but allow me to explain. Wind simply moves water and moving water is always good. In the Rockport area we have plenty of protected shorelines that aid in navigation so getting to very fishable waters is seldom the problem. With twenty-six miles of San Jose Island and at least that much of Matagorda Island, one is faced with what might seem to be an overwhelming amount of area to consider. Throw in the back bay regions and you're faced with even more options.

For June, the preferred bottom structure along the shorelines will remain submerged grassbeds and the guts formed in the sandy bottom by wave action. Add some menhaden, glass minnows and finger mullet and you've got an ideal fish-holding setup. Now you look for points and shallow bars where wind or tide moves water across them. Time your effort to coincide with a major or minor solunar feeding period and good stuff is in store.

On a recent late afternoon major feed my wife Renee and I experienced one of our better fishing trips together. We had everything needed in the form of bottom structure and bait but water movement was at a minimum. When the magic time arrived it was almost as if someone flipped a switch. Solid trout of seventeen to twenty inches were brought to hand along with numerous three and four pounders, and then the redfish showed. Pictured with this article is an eight-plus red that fell just short of the twenty-eight-inch mark. In much of the southern portion of Aransas Bay the wind provides some "sanding" to otherwise too clear water. Wind also provides water movement during the periods of the day when tides are slack. For those not able to plan according to the solunar tables and pick the best of days, wind can provide the water movement needed to create a feed during their time spent on the water.

So we know sort of where now and we are starting to see the wind as a friend but how do we locate the fish. It's structure, bait, water movement and then signs of fish presence. June is pretty simple when it comes to trout it's all about slicks. The shallower the slick the better the fish is my general thought. Menhaden are a primary food source for trout and reds this time of year. These baitfish have high oil content and therefore create slicks when fed upon. Slicks can be of two types, FEEDING and SPOOKING. Both accomplish the same end result to us, they give away the location of the fish.

Feeding slicks come from trout as they feed. Spook slicks, well they are from fish that have already fed but become spooked and they burp up that same oily stomach content boats, dolphins, lots of things spook them in shallow water. Slicks can come from both ends of a trout but I won't get into that; as some would say it's a little too much information. Pelicans and gulls will also signal us in on fish this month as well. Again, the shallower the birds, the larger the fish I feel.

So hopefully we are feeling better about our relationship with the wind and it looks like we have some fish located so what do we throw to catch them? Here in my water I am going with baits that have some silver in the color pattern. By now everybody knows I am a soft plastic addict but June is also a great month to go with topwater baits. On windy days MirrOlure's She Dog is my first pick and my favorite colors are blue chrome (CRBL), chartreuse chrome (CRCH), and bone chrome (CRBN). Bass Assassin 5" Shad in Cajun Croaker, Bone Diamond and Opening Night are my go to baits in the soft plastic world. I will go to an 1/8 ounce jig if the winds are over 25 mph. With braided line the wind can keep the bait from falling into the deeper submerged grassbeds. I want my plastic to actually swim up and down on the top of the grassbed itself. Best fish will usually come on the edges or from within the larger grassbed itself this month.

Lo and behold, the wind is actually a friend to us. We have to form a positive mental attitude in order to use its benefits but this will come with time spent fishing in winds most often thought to be harmful. As is always the case, BE CAREFUL when navigating the bay waters in rough conditions.