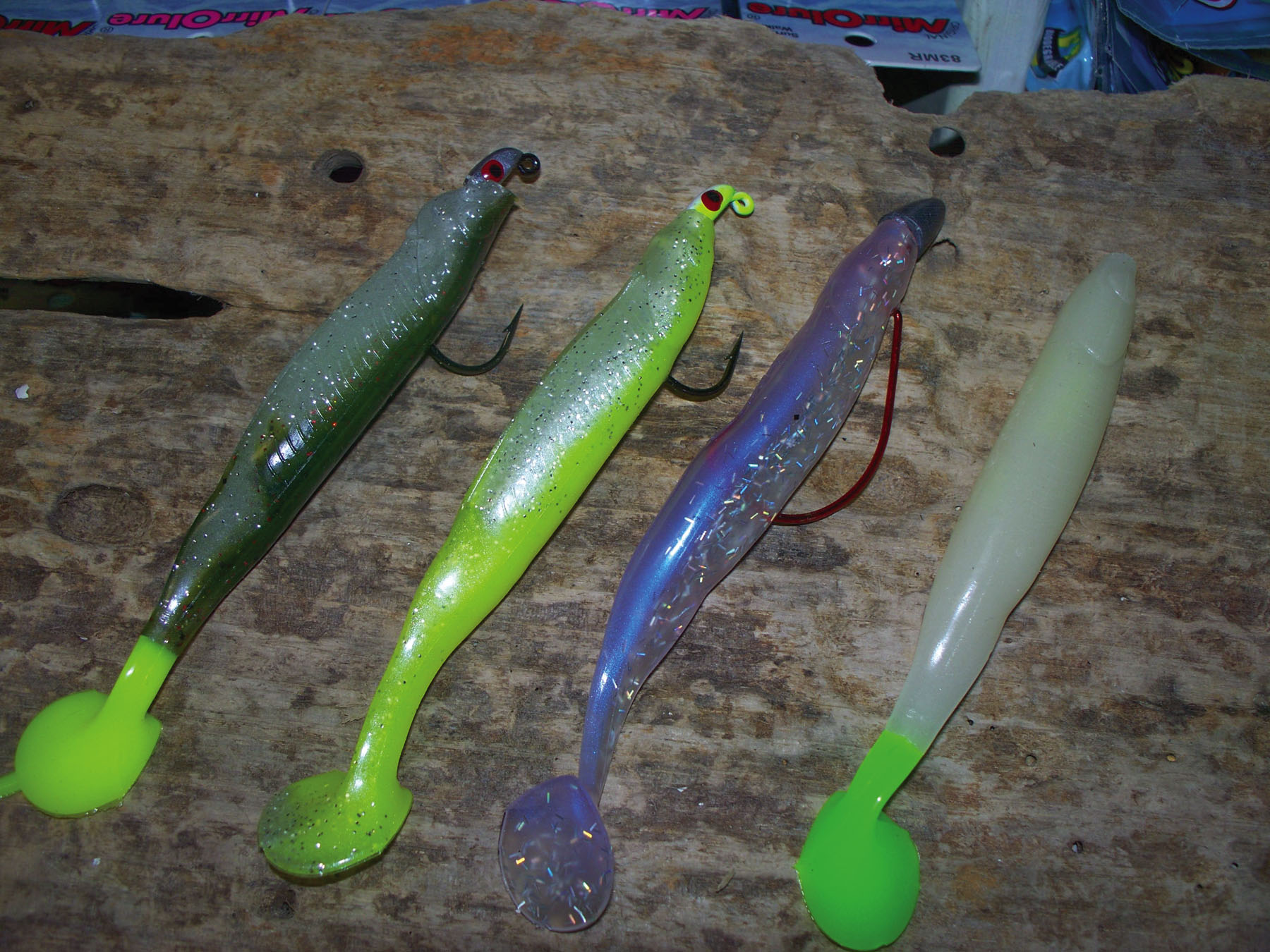 The new five inch Die Dapper swimbait from Bass Assassin.
"When you pull into an area, what do you see that tells you that it's a good area?"

I wish I had a dollar for every time one of my guys has asked that question. For starters, and a quick answer, I offer that conditions that can affect fishing are the first things you have to consider. After all, tides, wind direction and water conditions are factors that anybody can obtain easily. The real truth, though, is that one has to be way more observant, and getting the call right requires of the angler to visualize the unseen. Today in Mesquite Bay I had the opportunity to answer this question for a couple of anglers in a more in-depth way than ever before.

The air temperature was 37 when we pulled away from the dock at Goose Island State Park. The water temperature was just above 50 degrees and the tide was extremely low and falling due to northwest wind. Over the several days prior, the tide had pushed up, allowing bait to work in closer to the shoreline. I like higher tides in the winter when wind switches to the north. A false tide is created for a few hours and windward shorelines sand up nicely allowing larger fish to slide into the cover of the off-colored water during feeding periods. These were the exact conditions that we had as we headed to our first destination. Local knowledge and thirty-plus years of doing this has its benefits. While I certainly have a reasonable idea of where I should go under such conditions, is this truly all that one needs to put himself in the right area? No, not hardly. Fact is, we're still only scratching the surface.

Easing toward the shoreline on the trolling motor, I commented on the water color change along the shoreline and a few terns hovering along that line. A wind-driven tidal line was causing a rippling effect on a point downwind of where the terns were studying the water. A quick glance at the water temperature gauge showed a 2 change for the positive from the colder waters of Aransas Bay. An osprey was perched on an old duck blind, tearing at a large mullet. The high pitched call of another osprey was heard and a quick observation found her eyeing something just upwind of the area where the terns were still hovering.

"That's it boys, right here," I told my guys. "The fish are in the dirty water with the bait."

"What bait?" one of them asked. "The bait the osprey and terns are looking at?"

"Nope," I answered. "The birds see the fish, the trout and redfish; they're waiting for them to push the bait to the top so they can grab breakfast."

Smirks all around I could feel them even though I did not turn to confirm it.

"Stand far enough offshore to where your longest cast lands right near the water's edge," I instructed. "DO NOT let the wind, waves or the fish we are about to catch draw you too close to the zone. Remember that article I wrote a while back?" I added for emphasis.

Once in the water I saw a large black back rise to the surface and instantly a tern plunged and came up with what looked like some type of eel. Eels do their thing from about December through February, I'm told. A cast with the new 5" Die Dapper swimbait from Bass Assassin was met with a crisp double thump. A gaping yellow mouth attached to four pounds of winter-fat trout frothed the top of the water before coming to hand. For the next hour and a half it was a trout or a redfish bite on almost every cast. Not all were large but the call was right and a trout of a lifetime could have easily been caught in that location.

So what was it that we saw that told us this was the spot? It was not just the water change nor was it the wind-driven current pushing around the point. Not the osprey munching on the morning's catch. The terns, we see them all the time. How about that lone osprey chirping overhead trying to lay claim to her hunting grounds along our windward shoreline? All are pieces of the puzzle that when put together depict the perfect looking spot.

For sure, experience and knowledge gained from years on the water contributed to the location selection process, but it was ALL of the signs that gave me confidence to get out and wade. Yes, at times, any single piece of the puzzle could have been the key to the success we had that day. Over the years individual clues have produced many successes. The key I think is not overlooking the single elements yet not being distracted by them either. For me, my money is on putting the most pieces of the puzzle together everyday. Given enough time on the water and a genuine effort towards training oneself to take notice of every detail will allow you to develop a mental picture of that perfect fishing spot.

In closing, I would guess that by now all have heard the trout daily bag limit will not be reduced here on the middle coast. Personally, I have long believed that reducing the limit to five would be the right thing to do for our waters but I will harbor no bad feelings toward anyone who felt differently. I will not speak of it ever again. I'm going fishing and not going to worry about killing them. They say we have plenty!

May your fishing always be catching. Guide Jay Watkins