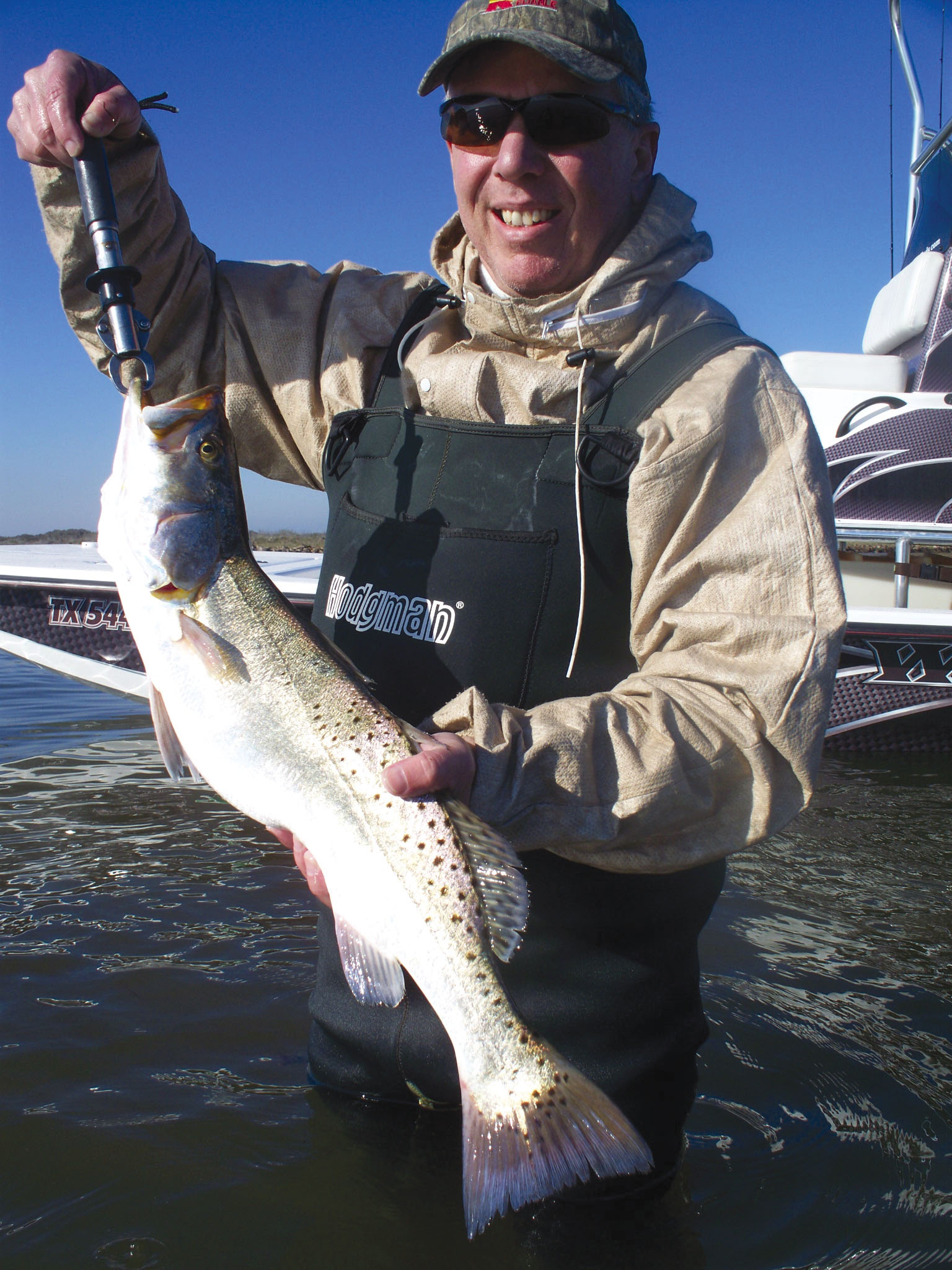 Heavy trout caught among lots of scattered bait along a windward shoreline.
Winds of twenty-plus miles per hour create better trout opportunities for me in Rockport than many tend to believe. The barrier islands of San Jose and Matagorda provide protection along the south shorelines of our bays from the high SE winds so common along the middle Texas coast during springtime. The abundance of grass and hard-packed sand provide a formula that attracts fish and anglers alike. This type of bottom structure and currents that run along the shores seem very attractive to spawning trout, especially when the water temperatures rise above 74F. The combination of water temperature and preferred structure, along with water clarity and increasing hours of daylight encourage mature fish to congregate along these shorelines and dump their eggs. Biologists say this occurs mostly during hours of darkness.

Much of the time the water will be too clear for tricking trophy-sized trout except at first light or just before dark. Nocturnal is no doubt the mode of operation that a large percentage of the trophy class trout adopt this time of year. Combine a few factors such as clear water, angler-savvy trout, and nighttime feeding and you can see where your odds of catching end up. I sleep next to something soft and sweet so nighttime wades are not in my future.

Getting it done during the daylight hours more often than not requires some help from Mother Nature. Wind is actually her gift to us even though it may not appear so at times.

The winds of spring push water into the bay systems and baitfish of all types ride the wind-driven waters along the barrier island shorelines. Tidal movements also play a significant role but tides rise and fall, the winds of spring pump in constantly from the warm Gulf of Mexico. So you see, the wind pushes the bait, the trout follow the bait, and we try to stay with them.

Strong wind provides surface chop which adds to our ability to get close without being detected. Surface chop actually helps us impart darting and jumping action to our mullet imitating surface and suspending plugs to draw instinctive strikes. The chop increases the refraction of light allowing trout to see the action of the lure but probably not necessarily enough to spot it as a fake. I believe that many times it is the erratic splash of the surface lure alone that draws a favorable result. I really enjoy working clear-bodied lures such as the Corky Fat Boy and MirrOlure Top Dogs in knee deep water.

Selecting lure color and rattle tone depend solely on wind velocity and water clarity which usually varies from day to day. I tend to lean towards lures with mostly clear bodies this time of year. I want the fish to see a small amount of color and a lot of surface commotion between pauses. I work the Corky vigorously in these conditions and have a tremendous amount of luck in doing so.

Typically the strikes drawn in these conditions are from trout weighing four pounds and more. Eight pound fish have become less common the past three or four years in our area but if you're looking for fish in this class, "shallow and windy" definitely ups your odds.

Expect the majority of your best trout to come from the first gut on the shoreline when high wind coupled with high tide allows baitfish the opportunity to use the flooded grass as a sanctuary. I often get my best fish when casting the outside edge of the bait line that forms as the mullet travel along the shoreline. Lower tides pull baitfish off the shoreline, causing the bait to bunch together. For small finfish there is safety in numbers, less chance of becoming a meal, but if a baitfish is moving differently, maybe struggling to keep up, especially along the edge of the group, it becomes a target.

All predators work the edges of the herd, hoping to separate a hapless straggler now and then. Suspending baits worked vigorously on the surface and then allowed to slowly wobble downward are greeted with tremendous aggression. The floating Corky Fat Boy as well as the original Corky are proven producers in this type of presentation.

On that rare day during spring, when winds for some unknown reason lay for the morning, you'll be forced to change your weapons. Approach and strategies for locating fish will remain basically unchanged but under calm-clear water conditions the big trout savvy meter will hit the red line. I go with baits of little color but silver or gold flash. Barely a glimpse of color and a little shine is about all I want the fish to see.

A 1/16 ounce jighead will work but slightly lighter is better, whittling on it with a small file helps. Five inch Bass Assassins rigged on 3/0 Mustad worm hooks also work beautifully in this situation. Increase your mono leader lengths. I like thirty-six inches or more. This allows for plenty of retying room and still leaves ample leader lengths.

I prefer topwaters and suspending type lures with NO rattles in clear-calm situations. Might just be me but I prefer to make as little of my presence known as possible and this applies to my lures as well. The clear Spook Jr. and the clear/silver MirrOmullet are great choices. Do this when the winds go calm and the water surface turns to glass and you'll be much more likely to get a shot at the biggest of trout in that area.

Alright, I tired of writing and ready to get out there in the morning and put this game plan to work. Winds are currently gusting to about 25 mph out of the southeast so it ought to be right.