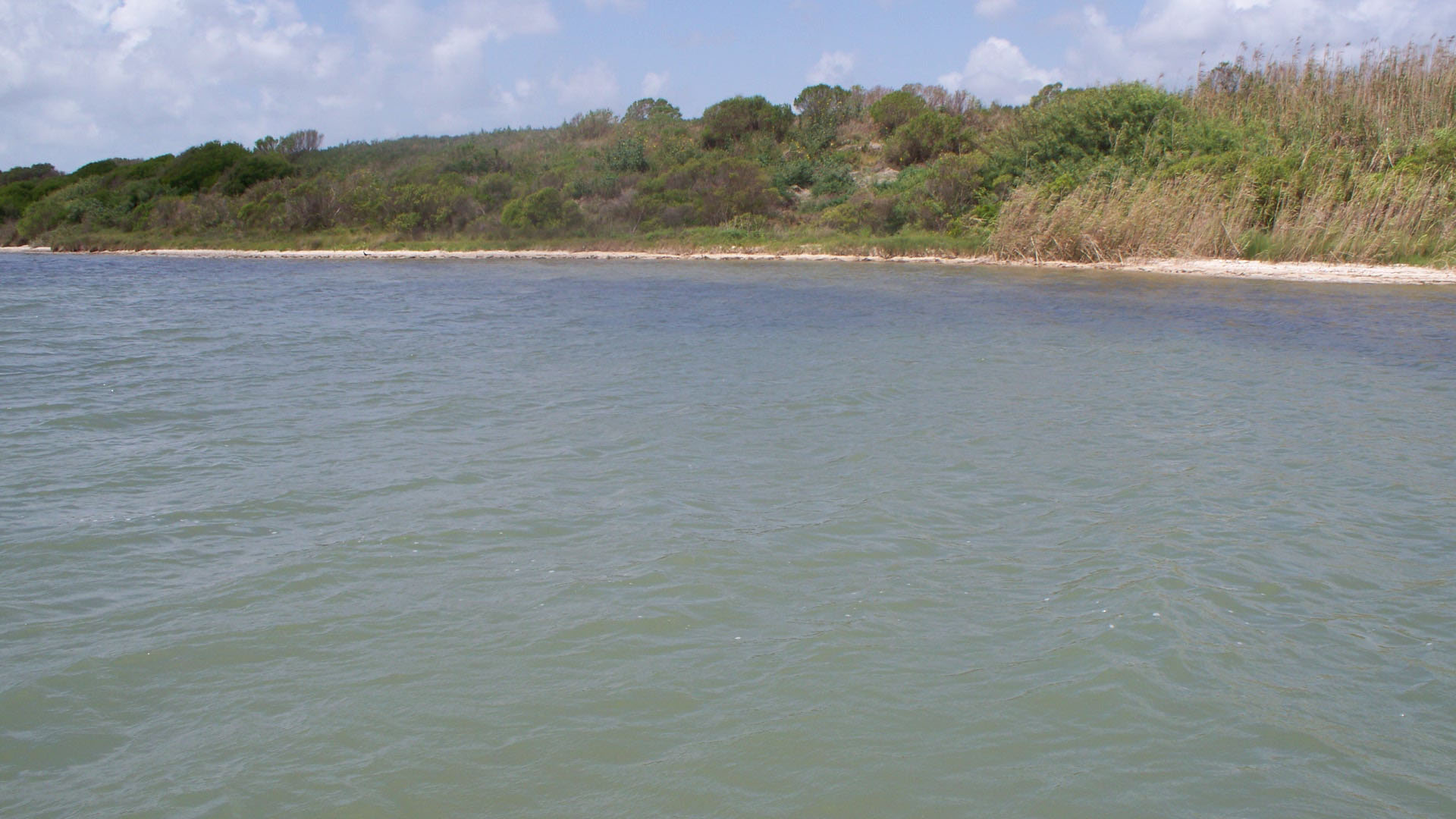 Spoil island with sand beach forming high tide wall.
I want to begin by telling all the folks that were in the path of Hurricane Ike that my family’s thoughts and  prayers have been with you. Some of my best friends and clients live in the Galveston and Baytown areas. I cannot imagine the discomfort and stress you have had to endure. Remember, God never hands us more than we can handle no matter how hard it may seem at the time. I know our prayers for you are heard. I gain comfort from that and I hope you can as well. You’ll get up, dust yourself off, rebuild, and go on with your lives; of this I am certain. I think of you each and every day.

Everybody’s asking, “What effect will Hurricane Ike have on the fishery?”

I can tell you this; in the long run it will be good. Short term we’re going to see some tough days.

The short term effect from Ike will be felt most in areas that took a direct hit. Any time you have storm surges over 20 feet and winds over 100mph our bays are going to be completely torn up for weeks, maybe months. The storm surge displaces everything in its path and there are reports of trout and redfish being found 15 miles inland between Winnie and Sabine Pass.

Right now there is a lot of debris in the bays and massive amounts of debris along the gulf beaches and passes at Port O’Connor and Port Aransas. Cautious navigation will be a must for the next three months at least. There are probably things submerged that we will not see until winter during extremely low tides. In the simplest of terms the bays got turned upside down and it is just going to take some time before things get back to normal.

Looking through a longer lens, hurricanes can be beneficial to fisheries in many ways. The same surge that created so much devastation also scoured bay floors. Bay bottoms that were covered with a thick layer of silt will sport harder sand bottoms. Channels and drop-offs will be sharper and more defined. Back lakes and marshes will have more circulation due to the sloughs that feed them being carved deeper and wider. There will even be some new sloughs and backwaters to explore.

Areas previously devoid of sea grasses may have new growth emerging soon. Water quality for the most part will improve, especially in areas where circulation is improved. This will lead to higher populations of bait fish, shrimp and crabs in our estuaries. It has taken a long time for our friends in Louisiana to recover from Hurricane Katrina but the marsh that survived is offering some of the best fishing ever. Louisiana already had some of the best backwater fishing in the world so if it is better than ever I can only imagine how exciting it must be now.

We received a surge here in the Rockport area, about three feet to be exact.  As of this writing our fishing has been tough at best. I am still experiencing some good days but to be honest most have been tougher than normal. The reason is higher than normal tides have displaced the fish. This is not uncommon after a storm but it has been so many years since we have experienced such conditions that many of us have forgotten the formula for success. Sometimes X times Y does not equal Z, but we stay the course and learn as we go.

I have two basic high water formulas, one for trout and the other for redfish. We’re going to discuss both but since my heart belongs to the trout I’ll start with them.

On higher tides I look for small areas of structure along shorelines that are typically NOT COVERED with water. Something about the new ground, whether it be scattered shell or simply sand seem to attract the trout that reside on the nearby drop-off and spotted grass and sand bottom. This concentrates the fish in that area.  More times than not, the trout that pull up and stage in these areas are better than average fish. I think the bigger fish feel more comfortable in the higher water when holding on these smaller structures.

It is important that you DO NOT get too close. You want to barely reach the area with your best cast. I find that I do best when about three out of five casts land in the targeted area. We create less disturbance when we are farther from the structure and the fish. This is very noticeable when fishing from the boat and trying to Power Pole down on a likely area. I also like little out-of-the-way points with structure that receives strong current due to the higher water level.

I remember about four years ago we had torrential rains in October and everything from West Matagorda to Aransas was flooded and fresh and the fishing stunk. I noticed one morning the tremendous water movement around the small point that sticks out into what I call Duck Pass in Carlos Bay. The bait was thick around a small hump of grass and shell off the point that is normally out of the water. Only a few strands of salt grass sticking up showed me the hump. I led five guys toward the point with instruction to stop where they could barely reach it. For two hours it was a trout or red on nearly every cast. We caught trout to six pounds; that in itself is very uncommon for these waters at that time of year. The way the point jutted out increased the current and the submerged hump provided the ambush point. I never forgot the spot. As I write this you could probably catch fish in that area.

The redfish formula is simpler. I look to the tops of reefs and to areas along a shoreline where there is either sand, a clay bank of some sort of manmade wall. Riprap is the term I use to describe the structure we see all up and down the coast used to prevent erosion. No back lakes for me, I believe that more water in the marsh scatters the fish. Instead of pushing back into the marsh with the higher water, the redfish move to main bay shores where bait can be pinned against some form of wall. When the tide recedes redfish move INTO the backwater.

I know this is the exact opposite of what many believe and as always there are backwater areas that provide the right scenario for high water redfish. My redfish formula is based only upon what I have observed.  The main bay shorelines, clay banks and riprap structures are my favorites and most definitely hold the easiest fish to catch. I position myself along the edges of the “walls” and ease along looking and listening for feeding fish. If you’ve ever seen a monster redfish knock a handful of bait out onto the bank you know what I talking about.

I suggest using lures that create noise or vibration. MirrOlure She Dogs, spoons and the Bass Assassin 4” Sea Shad are favorites. Do not shy away from stained or dirty water when the proper structure and bait concentrations are located. Redfish love the rusty-colored chop created during high tides and stiff NE or SE winds. Just today we walked a small piece of riprap in San Antonio Bay and caught four limits of redfish in less than three hours. So the next time you find yourself faced with unusually high tides you might consider applying my formula if yours is not working.

As frontal systems become more frequent our tides will drop and normal fall conditions will start to settle in. It promises to be the best of times along the middle Texas coast. As is always the case with my articles, what works for me is not always the way other fishermen see things, but it is my way.

May your fishing always be catching.