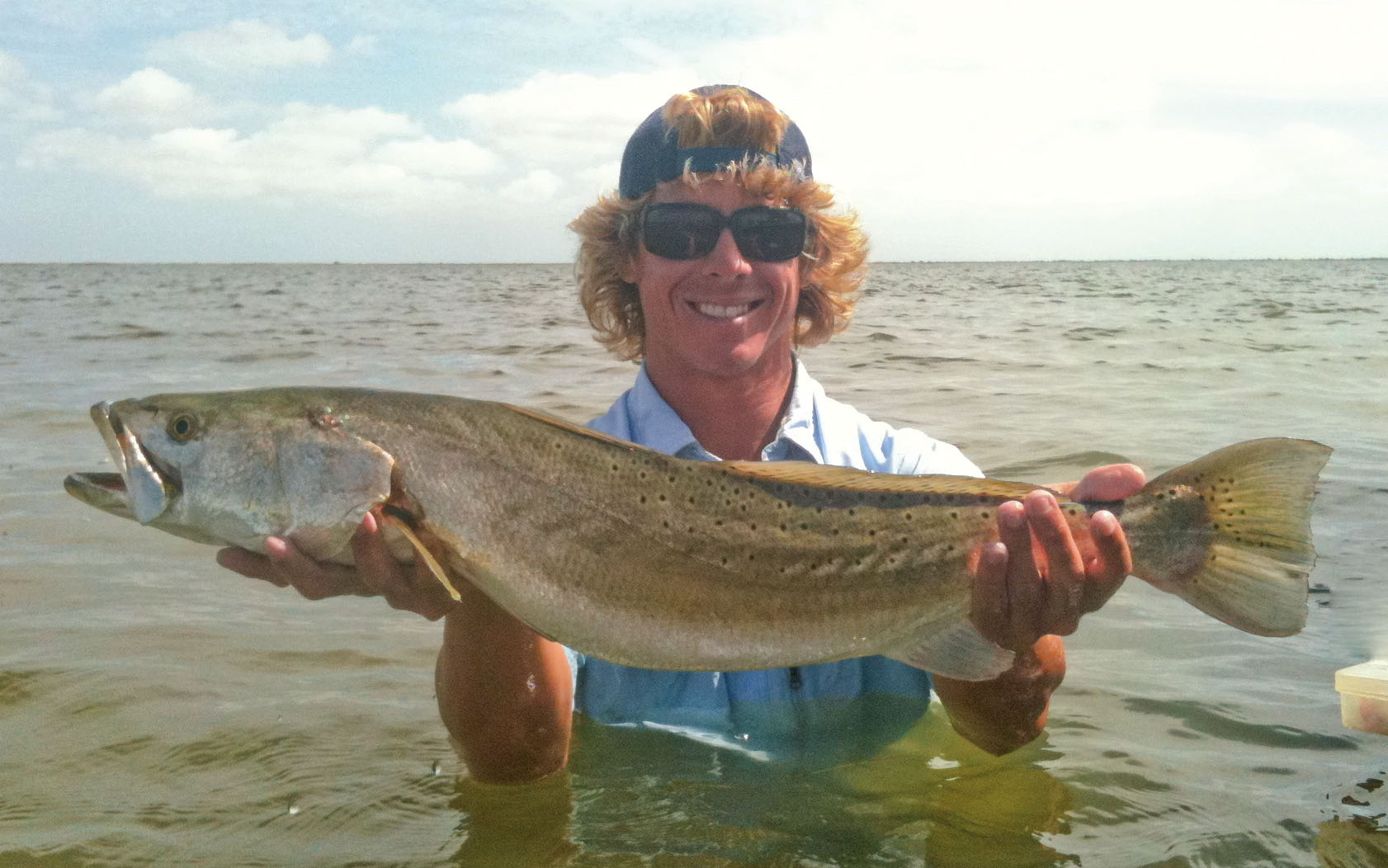 Jay Ray Watkins with a solid dirty-water late summer trout; CPR!
The first frontal system of the season is pushing through the area. Air temperatures have dropped about ten degrees and at this point we will take anything we can get in hope that water temps will begin dropping soon as well. I have been recording water temps in the upper 80s for the past two months and this makes a tough lure bite tougher.

My good news is that I did find some very respectable trout in September and I want to discuss the very specific conditions that aided me in locating and catching these exceptional fish. It has become increasingly difficult to consistently keep my trout anglers on what I consider worthy fish. I am very blessed to have such a fine group of experienced anglers willing to pursue higher-quality trout year round. Winter is still by far the best time to find and catch the larger fish but summer fish are absolutely worthy and a challenge to the best of trout anglers.

Over the past three or four seasons I have had the opportunity to fish southern waters more often due to the needs of my clients. Not my home waters by any means but I have always believed that trout water is trout water no matter what bay system you choose. Structure changes from one bay system to the next but structure is still simply anything that attracts baitfish and predators, we just have to learn to recognize it.

During late August and September the middle and lower coast received 20-plus inches of rain and the runoff dropped the salinity to single digits. Many anglers lose confidence in their ability to catch trout when this happens. Add to this the appearance of the water and fishing is often placed on the back burner. Honestly, I see this scenario in a totally different way.

Almost eighteen years ago I had the opportunity to spend a day with Trinity Bay trout guru Mickey Eastman. On this particular day we were on Sabine Lake pre-fishing an upcoming TroutMasters tournament. Freshwater is no stranger in Sabine Lake as the area receives about sixty inches of rainfall annually and the lake often appears brackish.

“No one will be fishing the north end of the lake,” Mickey said as we left the dock. He was right, there was not a boat in sight while we worked slicks and birds. At one point Mickey tasted a handful of the brackish water. “Perfect,” he said, and then proceeded to put me on solid three to pound trout. As we started to pull away from a shoreline that Mickey suggested we wade on Saturday I dipped a handful of water and swashed it around in my mouth. Lowell Odem, my tournament partner sneered and asked sarcastically if this was some kind of guide ritual. I replied that I just wanted to see what perfect tasted like. Since that day I have not been shy to fish water that appeared totally fresh as long as it has that perfect taste.

Freshwater is less dense than saltwater and can form a layer on top of saltwater. By observing our boat wake we can often see the emerald green water below as the muddy and fresh surface water is displaced. I have also seen times when only a small zone of salt water exists right along the bottom. In both situations we need to focus on keeping our lures in the salty zones. Soft plastics and suspending baits are excellent choices for these conditions but never pass the chance to try a surface plug. During the TroutMasters tournament I mentioned we caught some six-to-seven trout on MirrOlure Top Dogs.

Another side of freshwater inundation is what I call the stack-up or concentration factor and it is really quite simple so long as you don’t try to over-think it. As runoff makes its way into the bay, areas closest to the mouths of creeks and rivers along the mainland shore become inundated almost immediately and this displaces baitfish and gamefish to areas that are still salty. We see this often in San Antonio Bay when trout, reds and lots of bait concentrate along the Matagorda Island shoreline. If the freshwater inundation reaches the south shoreline the fish will enter the lakes and marshes on the island as these usually remain saltier.

My best-ever trout day in Aransas Bay occurred shortly after a prolonged and heavy rainfall event. As soon as the weather cleared I took a group to see what we could find. The water was brackish and nearly three feet higher than normal. Mid-bay reefs and islands that normally stood above the surface were submerged and the currents were uncommonly strong as the swollen bay drained to the Gulf. In some places the current rushed and gurgled like a river. We stood up-current of a set of small islands and the current carried our lures into eddies off the points where the fish were in a frenzied feed. We caught seventy trout and lots of them exceeded five pounds; very uncommon in Aransas Bay at that time. I never tried to count the reds.

On recent trips down south where water clarity was poor with salinity in single digits, we caught trout from two pounds to four and a half pounds in great numbers and some days we caught legitimate seven pounders. If you think the recent influx of freshwater is going to hurt your fishing you might consider carrying a copy of this article on your next fishing trip or at least read it again before you go. I promise you the words written here are true and freshwater runoff can actually create some of the best catching scenarios of the year.

In closing, you know the Keep Five limit I have been promoting on my charters. I have a new one, FISH FIRST. Put the fish first and I think everything else will fall into place. Just do what you think is best for the fish and let’s see what happens. Maybe the next generation of fishermen will look back and thank us for our proactive conservation actions. My friend Bill Kinney is responsible for the new slogan, I am just borrowing it.

May your fishing always be catching. –Guide Jay Watkins