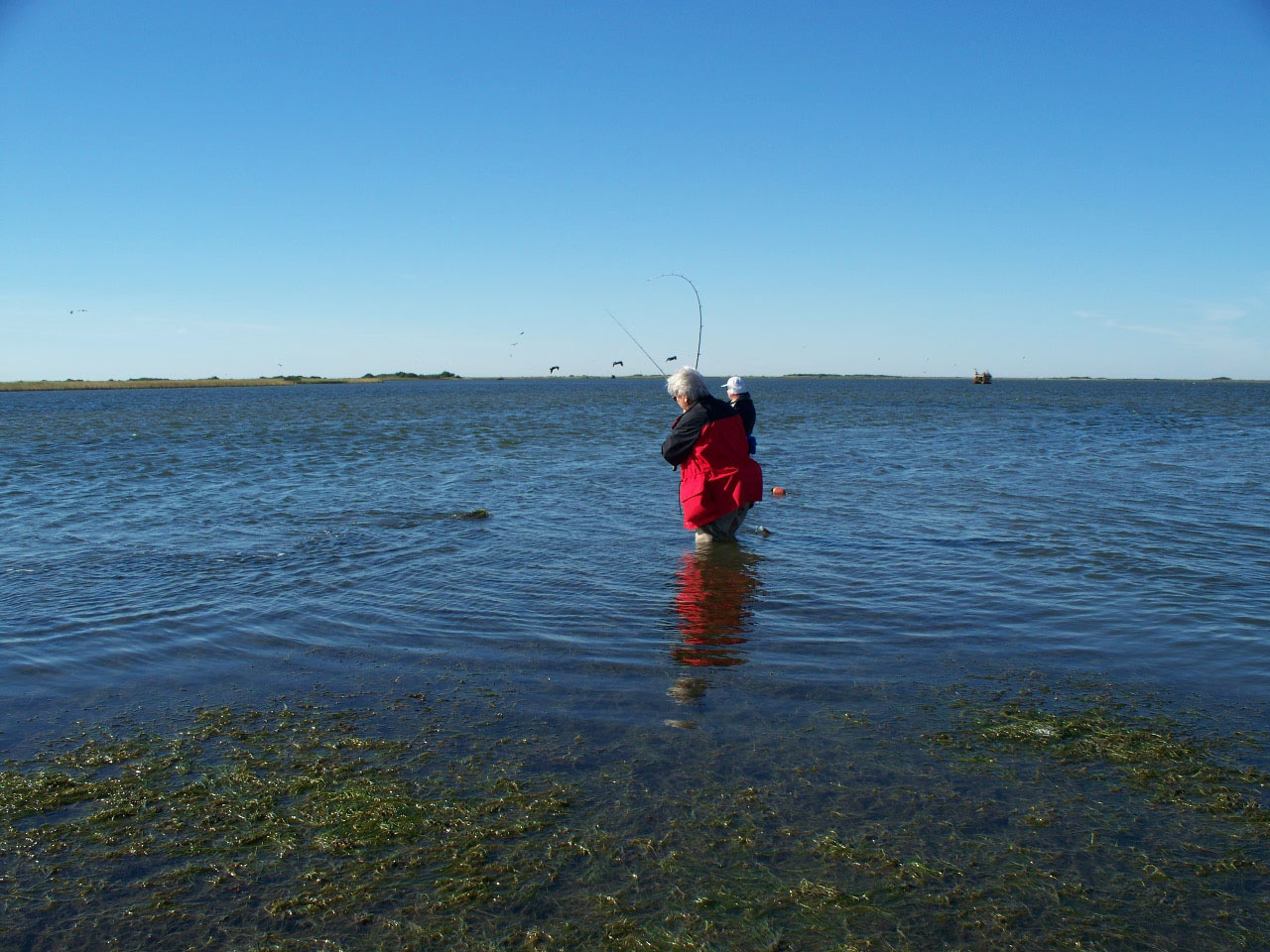 Double hookups are common in fall sloughs.
Thank goodness October has arrived. It was a terribly hot and mostly dry summer along most of the middle Texas coast. With dry conditions usually comes extreme heat and with heat comes wind. We have had stronger SE and SW wind this summer than normal. I guess this has been a blessing at times but more times than not it kept me off some of summer's more productive areas.

September 1st brought Hurricane Gustav to the Louisiana coast. New Orleans was spared the devastation this time round. After Katrina, the festive city and its robust citizens did not need another setback. This time around the people were better prepared and most evacuated low-lying areas that are prone to flooding from tidal surge and the catastrophic rains that accompany Category 3 storms.

I know we were all thankful to see only modest damage and casualties in the wake of Gustav. As of this writing we have three tropical systems out in the Atlantic; Hanna, Ike and another system not yet named and referred to as Invest Ten. Ike looks to have the best possibility of making it to the Gulf at this time.

October is the start of everything that is good along the middle Texas coast as soon as we get some cooler weather. Migrations of all species of ducks and geese arrive with the passage of each front filling the air with the sights and sounds of fall. Baitfish start making their way to deeper waters and gamefish gear up for winter by strapping on the feed bag and doing what we like most, EATING!

October is the start of my favorite season. I have stated in all of my JAY WATKINS FISH SMART FISHING SEMINARS that October is the month when just about any type of fishing you want to do will be productive. The choices of lures that fish will be attracted to are almost unlimited and any type of structure you choose will probably be holding fish. From the oyster reefs, to the shorelines, the back lakes and the sloughs that feed them, fishing will be as good as it gets when the weather conditions allow us to get on the water.

In 2007, we saw our best fishing prior to and during frontal passages. Fishing while the frontal systems move through requires a good working knowledge of the bay system as well as a boat that is designed to handle either heavy seas or very skinny water. I have both; a 22' MAJEK EXTREME for the rougher stuff and a 22'6" MAJEK ILLUSION for the skinny water duties.

The leading edge of the fronts pushes water into the back lakes and marshes of Matagorda and San Jose Island. Sustained north wind blows the water out of the main bays which initiates a dump of water from the backcountry. Sloughs that feed the backwater areas are the paths that gamefish and baitfish use to make their way to and from the backwater and the open bays. Our fall and early winter fishing was excellent last year in the sloughs and along adjacent shorelines.

Redfish will be sure to please Rockport anglers this fall with the strong numbers we have in area bays. Trout will be easier to locate and catch than during summer but I think the numbers of quality fish this fall will be fewer than years past. With this in mind we are practicing greater conservation than ever before and urge others to do so as well.

We have caught a surprising number of flounder in late-August and early September and we hope this will continue into October. According to TPWD surveys flounder numbers are down, therefore I urge that we should voluntarily limit our harvest. In 2006 we had a tremendous fall flounder run. Catching flat fish over 6 pounds was common for about two weeks so I suggested to my anglers that we only keep a very few that we caught. I will be suggesting the same restriction this fall.

My personal lure list for October will include MirrOlure's Mirrodine XL, Series II S38MR, the proven 51 and 52 MR series, and a selection of Top Dog floaters. You can bet I will not leave the boat without my Bass Assassins. The 5-inch Sea Shad is a terrific trout and redfish bait and the 4-inch Sea Shad swim bait is as close to criminal on reds and flounder as anything I've seen. Along the shorelines of just about all our barrier islands, swim baits, spoons and topwaters should be very effective when worked over submerged grass beds. Whether the submerged grass be shallow or along deeper drop-offs, gamefish should be there and waiting for an easy meal.

Reduced daylight and the drop in water temperatures signal the fish to feed aggressively and we will see feeding periods that last much longer than during other seasons. Overcast days can bring us an all day bite. I don't know if all the fish eat all day long or maybe it's simply the number of fish trying to get a meal; whatever the case, it is good stuff for sure.

During October we will have periods when waders are not required but you need to have them ready. I typically get into my waders once the water temperatures drop to around 75 degrees. It seems that as I grow older my tolerance for wading comfortably in cool water is changing by the year. Simms breathable waders offer greater comfort than anything we had in the good old days. Starting in October, good foul weather gear is a must. Trust me; spend the money, good gear will make your day on the water much more enjoyable.

For those who prefer to stay in the boat there is probably no better time of the year for drift fishing. Between fronts the winds will be light affording the luxury of long, slow drifts. The slower we can move across the flat the more opportunities we have to cast to the targets the fish will be staging around.

October is also the time when Texas hunting enthusiasts begin making weekend trips to hunting leases in preparation for the upcoming season. This reduces traffic on the bays making fishing even more pleasurable for us diehard chunkers during the fall and winter months. The sweltering heat of summer is finally behind us and nothing but good fishing lies ahead.

The photos from fall 2007 should get you inspired to start making plans for your next trip to the coast.

May Your Fishing Always Be Catching.