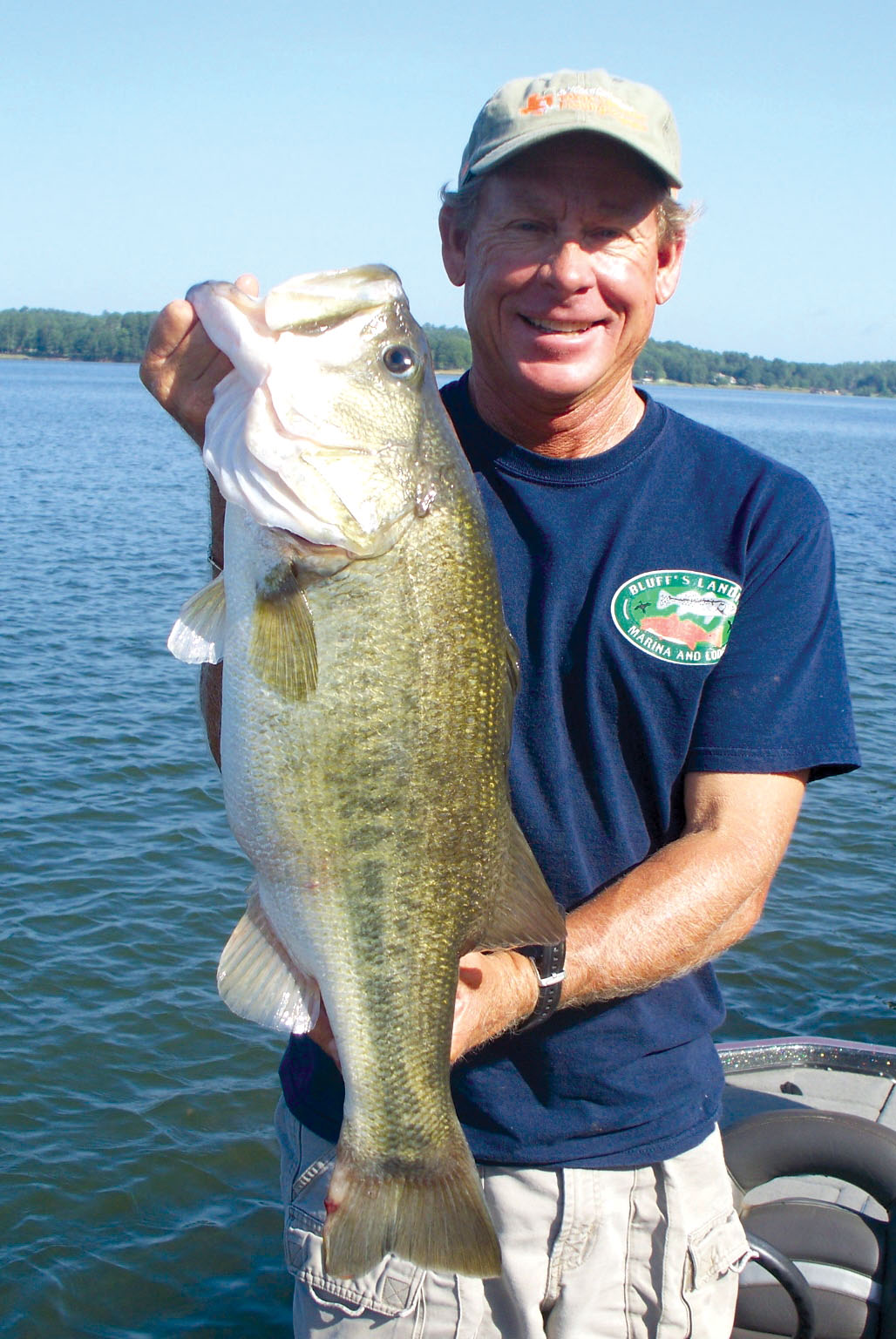 Jay with 9-1/2 pound brush pile chunk. Good habits pay big dividends.
I have found that life is made up of many small moments. Some are life-changers. Some for the good, some for the not-so-good. In fishing we need always be prepared for these moments as opportunity rarely knocks twice. I have always believed that we make our own luck. Back when I was graduating high school my father gave me this piece of advice, "Control everything you can and don't worry about the rest." Hopefully the contents of this article will help you be more prepared for your next moment.

I found out soon enough that life would deal cards I didn't like, but I'd still be stuck with the dealer. I took that attitude with me as I entered the fishing business and coined the term "Fish Smart" as sort of my slogan. By fishing smart we control every thing we can and deal with the rest as it comes.

I had a guy show up one day to fish and on the way to our first stop he asked, "If you could tell me one thing that would make me a better fisherman, right now before you have even seen me at work, what would it be?"

I turned directly to his rod and spit out something along these lines. "Your line is too heavy and so is the jighead. No snap swivel, ever. Downsize the hook, rig your plastic straight and upside down. Your rod is too stiff and too long. Always set your drag to at least slow the fish before he spools you and, for God's sake, put more than thirty yards of line on your reel!" I think those nine or ten things would have definitely made his day more productive and we had not even evaluated the rest of his game.

The day progressed with many questions.

"I let the fish show me from day to day. I stop where the signs meet the conditions."

This went on and on and that is a good thing, he wanted to learn and was willing to be taught. Wade after wade I instructed on the importance of fishing smart and only worrying about the things we could control. Too often, anglers worry themselves over the wrong stuff.

Here's a short list of some things you can control:
-Set the hook the same way and fight every fish the same no matter the size. Not many anglers can tell the difference between the bite of a 16-inch trout and that of a five pounder. Truth is; a five pound fish might not take the bait as hard as a small one.
-When your fish gets her head up, lower your rod to get her head back down. She goes down; you bring the rod up to gain control of the fight.
-When a big fish is left with little or no pressure on her head she will rest, waiting for that one fateful moment during which she might be able to ruin your day.

By doing the same thing every time on every fish you stand a much better chance of landing that fish of a lifetime. By using a fish smart approach to each and every trip, one is prepared for that one moment during the day when a fish of a lifetime comes knocking. A prime example of this was a wonderful experience that occurred not too many weeks ago. As many of you know both of my boys are avid fishermen, darn good ones too. Jay Ray makes his living fishing and Ryan, the younger, is a senior at Stephen F. Austin University. Ryan is the bass fisherman in the family and has done exceptionally well considering his prior experience was limited to the small lake in our backyard.

Ryan's good fish-finding and catching habits have played a major role in his ability to quickly learn and understand seasonal patterns on the lakes of East Texas. "Structure is structure; some is just a whole lot deeper than what we are accustomed to fishing," he once told me.

On a recent weekend trip that my wife Renee set up for me, Ryan and I were witness to the importance of fishing smart and always reacting the same way to bites.

It was 101 degrees when we finally moved to a deep brush pile Ryan found last year. We had encountered trolling motor difficulties and were in the process of easing within casting distance. The tackle was heavy worm rods with Texas-rigged Zoom worms, Tungsten 1/8-oz bullet weights and 17lb Seaguar Invizx fluorocarbon. After only a few casts Ryan had a five pound fish in hand. Photos and hand slapping followed; dad is always proud to snap photos of the boys with nice fish.
Ryan's next four casts brought four solid bass. Dad was having some trouble getting the distance and the feel down but it finally came together.

As my next cast hit the water Ryan said, "That's a fish if you let it go all the way to the bottom and then lift slightly. Don't jig it, just lift and let it fall. A heavy line is a fish, load the rod and get after her."

About two lifts into the cast the rod felt heavy. Instinct said, crank down quickly to load the rod and stick the fish. In less than a second I felt the headshake of a large fish. Ryan watched as the line rose toward the surface and we both went nuts as a huge ball of whitewater erupted. The fish wanted her head up and wanted to shake; this is never good. I stuck the rod down in the water and cranked her back down. Three or four times the fish tried to surface but each time I was able to keep her down. I never backed off the drag, I knew better. She pulled left; I pulled right, rolling the rod tip downward as I turned her.

Ryan looked on in excitement. " I think she's a 10 pounder, bring her to me when she's ready."

With a youthful grab my bass of a lifetime was locked in my son's hand. What a glorious moment. My son, the one I taught, the one I led to his first big trout and redfish, the one whose hero I was, had now become my mine. I know it sounds sappy but it's a big moment for a dad when he sees his passion being relived in a son or daughter.

The fish weighed 9 pounds on our digital scale. We made a quick photograph and returned the grand fish to the lake. After a few moments and some vitamin water, I stood and cast back to the submerged brush pile. Once again on the second or third lift I was rewarded with a large bass, this one weighed 7 pounds, a bit less but still a thrill. We released thirty-two fish in about two hours as a crowd of boats and onlookers sat close by. Bass fishermen seem to respect the findings of others and are content to watch. Maybe they too realized that it was a special moment for us. At day's end I think we both sensed something very special had been forged between us.

At the Tyler airport Ryan stopped short of the security check. "I am horrible at goodbyes so I'll stop here," he said.

I suck at them too, so I was good with it. I hadn't gone many steps down the corridor when I heard him call out. "We sure had ourselves a moment, didn't we dad?"

Life is made up of moments. By being prepared we make the most of them, both on the water and in our personal lives.

May Your Fishing Always Be Catching