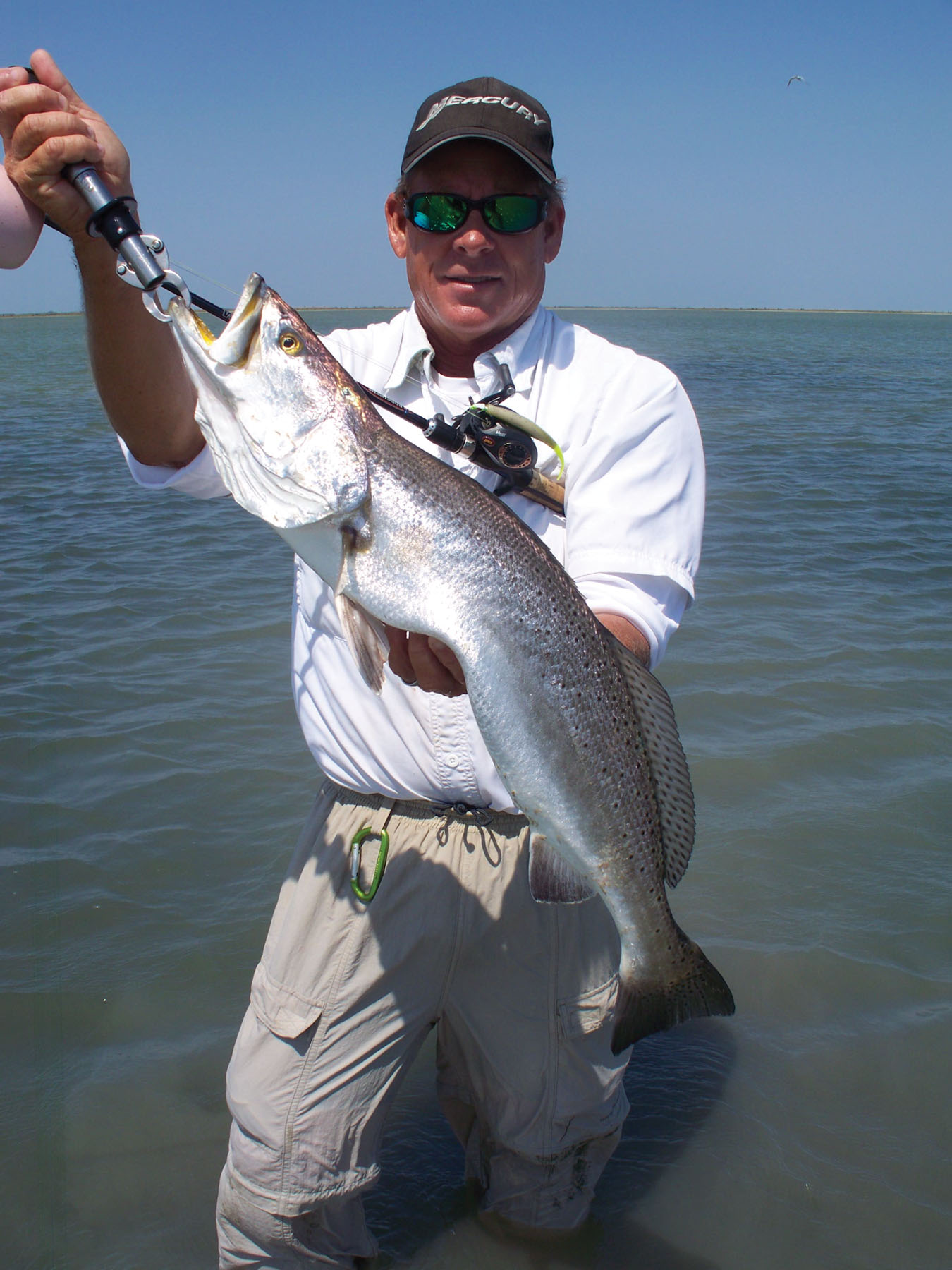 Late summer 30-plus seven pounder, the bonus was sight-casting. CPR!

I was at a captain's meeting for a recent redfish tournament and had the opportunity to speak with a few anglers that regularly read the articles in this magazine. One asked me to write something different once in awhile and try to include some specific spots, not just general patterns as I normally do. I had to laugh inside as I continued to listen, not at him by any means, but the concept that it is all about the spot.

As the conversation continued, I explained that I am really not much a writer, more of a reporter of what I do. I would never compare myself to any of our feature staffers when it comes to the written word, especially McBride, he is the best. I write what I believe I know. My articles are based on seasonal patterns as are the game plans in which I plan most everyday that I spend on the water. Boring is my middle name I am told by those close to me so why would my articles reflect anything to contrary?

Boring and non-spot specific as they might seem at times, they are founded from solid on-the-water experiences mixed with the knowledge learned from many of my fellow fishermen, as well as some of you the readers. So in this month's article I'll talk about a specific area, walking you through the process that I go through mentally when assessing an area before fishing it.

Let's go to the Second Chain of Islands the region between San Antonio and Ayres Bays. If you go to Google Earth one could quickly come to the reasoning behind why this area would consistently hold fish. The Chain, as we call it, is typically a very good area year round. Right there is your first tip.

The Chain is laced with hard shell crowns, scattered mud and shell, deeper drop-offs with access to deeper water, and moving water. In just a few words I have described exactly what you should be looking for in a spot no matter what the season. In September the key ingredients to daily success will be early arrivals, moving water, location of baitfish and your ability to follow the signs the fish create as they move from nighttime feeding areas to their chosen secondary structural retreat. The most important message in the previous sentence is your ability to follow the signs.

Typically the baitfish will be on the shallow shell humps and shallow guts along the southern faces of the fingers of hard shell that stretch out to the northeast. The shallow water and the islands that make up the southern portion of the Chain create a funneling effect which creates stronger water movement further up the Chain. Trout and redfish alike will stage and hold on the up-current sides of the scattered shell that tapers down from those fingers so a southerly approach is needed. Even though we usually position ourselves where we can make downwind casts I strongly suggest some angle in your cast. This allows the lure to cross out in front of more fish on each presentation whereas a straight downwind cast addresses only a specific narrow range of opportunity.

The best feed is typically early due to daytime heating this time of year so making the most of the prime time is extremely important. Once fish are located, try to fish a line parallel to the line that you are receiving your bites along. Try making long casts to the discovered ambush point. Ambush points are chosen for the following factors: optimum water movement, availability of preferred forage, quick escape routes to secondary structure, and water temperatures.

Now these next few lines separate those who catch and those who do not understand why they do not catch. STOP! Please stop and make repeated casts, at forward angles along a line, parallel to the line along which you are receiving strikes. To trick here is to ALLOW the fish to come to you in their own way and on their time. I have been known to spend an entire morning standing in one area, catching a fish or two every five to ten minutes. Now do the math. In four hours, four guys catching a fish every five to ten minutes apiece is a lot of catching! Once this pattern is perfected and confidence is gained in the effectiveness, your going to be The Man at the dock more times than not.

I know this might sound boring (I warned you about that) but I'm going to repeat myself just to make sure it sinks in. Ambush points are chosen for the following factors: optimum water movement, availability of preferred forage, quick escape routes to secondary structure, and water temperatures.

If you pay close attention while wade fishing you can certainly feel the changes in water temperature. Shallow water cools slightly overnight and a few degrees of difference will feel more significant than our onboard water temperature gauge might indicate. This has certainly been true for me the past few weeks from San Antonio Bay all the way to Port Mansfield. Hey, I am going to move around looking for the spot that is holding the best trout and redfish I can find for my clients. Cooler, moving water attracts predator and prey alike.

OK, now there's some spot specific information for you, along with some of my usual boring I think I know stuff thrown in for good measure. I hope it helps you in formulating your game plans to locate and catch a few more fish the next time you're in the Rockport area.

If you will allow, I'd like to brag just a bit on my son Ryan and his partner Andrew Upshaw for a few lines. Ryan and Andrew, representing Stephen F. Austin State University, recently won the B.A.S.S. Masters National College Championship in Little Rock, Arkansas. If you are familiar with college bass fishing you know this sport has taken off like wildfire across the nation. To win any national title is big but the B.A.S.S. Masters National College Championship is the Super Bowl. B.A.S.S. Masters is the premier tournament tour and anyone that knows bass fishing knows what that represents. Emotions led to tears on both ends of the phone when I answered and heard Ryan's voice trembling, trying to get the words out... Dad, we did it. We won. We won the Bass Masters National College Championship!

I want to congratulate the team of Ryan Watkins, Andrew Upshaw, and Blaze Pratt on a remarkable college bass fishing career. You guys are awesome.