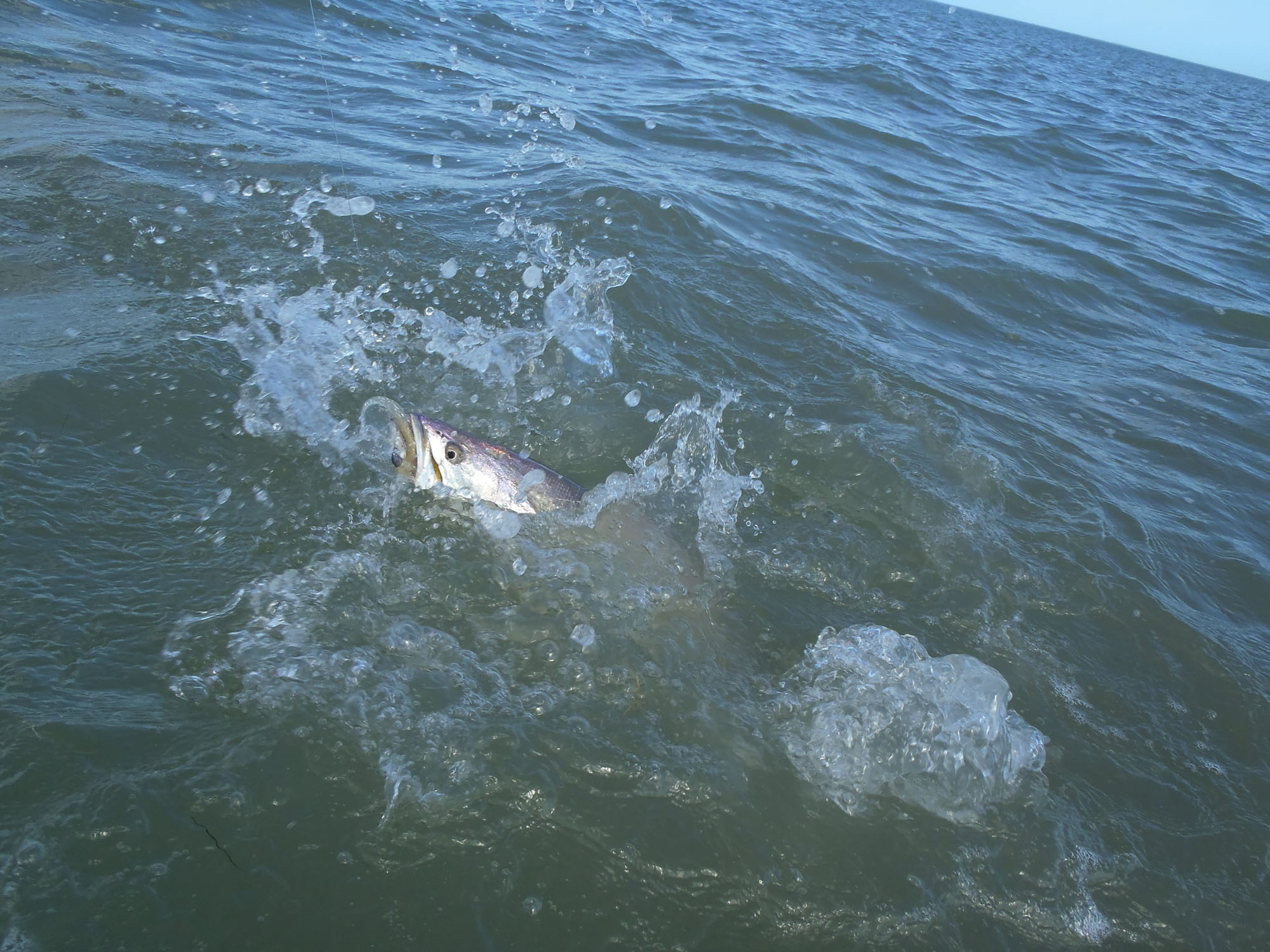 Schools are out and the summer crowds are heading our way. This is the busiest time for fishing guides and most local businesses. From all indications the summer of 2012 will be a profitable one for these folks and this is good news as parts of our economy are still struggling. Texas is way better off than most so we should consider ourselves blessed.

Recently on the boat we discussed the continuous learning curve that all fishing, salt or fresh, requires if you want to become proficient. There's tons of information out there today for anglers of all types. If you are internet savvy you can find detailed information on just about every bay system or freshwater lake there is. Collecting information takes little effort; putting it to good use requires the opposite. Water time is big time and there is no substitute for days spent on the water.

When I first started guiding in 1979 there were only a few guides in the Rockport area that took small parties of anglers to fish the shallow waters south of town. We had larger party-type boats that took bigger groups to the deeper reefs and oil platforms but, only a handful of guides ventured into the flats or along the beaches of our barrier islands. Very few waded; this was mostly done by more experienced local anglers. My first guided trip was wading, not because that is what the gentleman and his wife wanted to do, but because it was the best way to catch the best trout on Lapp Reef in Copano Bay. We had a ridiculously good morning and my career was born without me even knowing it.

Back in that day and time we had no cell phones, internet, or goggle earth, only a VHF radio and Loran C. I had a VHF radio. So how did we learn to navigate, much less pattern fish? I navigated by sight. Dark colors in the water were usually shell or grass, obviously shallow enough to see, so probably shallow enough to hit. White was shallow sand. Dark greens and blue-green represented deeper water of channels and guts. Pretty safe navigating with an 18 foot wooden skiff and a 70 hp engine. Some of the best reefs and sandbars that I still frequent were discovered after running aground.

When it came to learning fish patterns I depended on the commercial fishing community, even though most of them were not aware. I knew almost all of them but would not say we were friends. We exchanged hellos at the dock or local stores during early morning fill-ups on fuel and coffee. Occasionally on bad weather days we would sit around a table at Kline's Café and tell fishing stories. They probably did not realize how much they knew and that I was learning from them, none-the-less when a Rabbit or Leon Chandler spoke I listened.

Rabbit's son Robo told me of some trout he had found in Baffin one time while trotlining for drum. When I asked if he thought there were good numbers of them he looked at me with surprise and said, "Jay, I'm catching them on sticks!" His word for small slices of wooden dowel with a hole drilled so they will float on the hook to resemble a small crab. I still listen to them today when they are inclined to talk.

The late Howard Brown taught me plenty. He was as colorful a character as the coast may have ever known, but when it came to knowing the patterns fish followed, he knew. I hated what happened to the commercial fishermen when the nets were banned, not that I thought or felt that nets should be allowed, it was just that commercial fishing was all some of them knew and many of them were forced at a not-so-young age to seek other employment.

My boy's grandfather Danny Adams was a commercial fisherman. I have a favorite photo of him sitting next to me and his daughter and she is wearing an early GCCA windbreaker. I learned a ton from this man and he gave it to me willingly and I have a deep respect for the knowledge he has of the bays. Commercial guys learned the hard way. A faulty set cost them a day's wages, maybe two, and sometimes their gear. They learned from a lifetime of trial and error. They were plenty smart, smart enough to record mentally the time of year and the conditions in which the set was the most productive. Don't think for one minute that setting a net or trot line is a no-brainer. If it would have been easy more people would have been doing it.

I watched a commercial fisherman set trotlines many years ago along the windward shoreline of a small back lake where I hunted ducks often. We literally watched the line load up with large trout and redfish as an old-fashion Blue Norther pushed through during a morning's hunt. It took several seasons of watching this to finally realize the whole windward-water dumping-fish pulling up to feed on the falling tide pattern. Now that's a mouthful, and a brain full too, and all gained from watching a hardworking commercial fisherman. I religiously fish this area every winter during the brunt of the storms and catch them like crazy.

On a recent fishing trip to Port Mansfield I was lucky to meet two commercial fishermen I have heard about for years. Roy Lee Evans was a commercial fisherman that now guides anglers to the productive fishing grounds of the Laguna Madre where he has spent his entire life. His brother Bun Evans runs a shrimp boat and some drum lines down there providing live bait to the local bait shop and sells his drum in the local economy. Over a cold afternoon beverage I heard the waitress refer to the guy at the end of the bar to as Bun. The name reminded me of a winter fishing area the locals in Rockport refer to as Bun's Hole. It's not a common name and since there was a Roy Lee Evans in Port Mansfield I wondered if maybe this was Bun Evans. I asked if his last name was Evans and he asked, "Who the hell wants to know?" I introduced myself and explained my reason for asking and the tension decreased.

After telling him my version of the story of how Bun's Hole got its name, a story I have been telling for 33 years, he laughed and told me the real events and reason behind the name. Way better story than the one I was told. And, what made it so believable was the fact that I know the other party involved and had heard the story minus the name attached. After a while I let him know that I was in the process of leasing property in Port Mansfield with the intent of fishing some of my clients down that way on occasion. With this he informed me that I needed to meet his brother Roy Lee, and Roy Lee, "Was for sure not going to like me for nothing." No matter, he insisted, we might as well get the introduction over and done with.

All the while I was thinking, "Heck man, I don't need conformation, I'll just take your word on it."

Shortly Roy Lee shows up and is totally nice, blunt and to the point, but nice. We start talking fishing and before Roy Lee leaves he goes out and gets me a few of his favorite lures to throw. Very nice gesture, so you can bet that I will respect him as well as all the other guides, men and women alike, when it comes to fishing their water.

This is where the respect for others must come into play. We talked for an hour or more about way back when and commercial fishermen we all knew. It was a good time, and again, I walked away with more knowledge. Not so much about fishing this time, but more about how fishing can bring people closer together.

The deal here is that there is a respect that exists between true fishermen. It's an unspoken thing, an atmosphere that develops when you come together; you can't fake it. Fishermen recognize other fishermen and fisherwomen, we just do. For me its not the type of boat, fashionable clothing and sunglasses, but the firmest of handshakes from guys in their 60s and 70s, the sun-beaten leathery appearance of our faces, it might even be that desperado attitude, but it's certainly something that suggests you're in the presence of a fisherman..

In closing I'd like to thank all the commercial guys that have helped me through the years. There are many that I never met but watched; to them I am equally thankful. I would also suggest that the next time you see a trotline along a favorite stretch of shoreline, make a note of the conditions of the day, the angle of the set, its water depth and distance off the shoreline. Bet you'll find that the fisherman in the old wooden skiff knows way more than you might have ever thought.