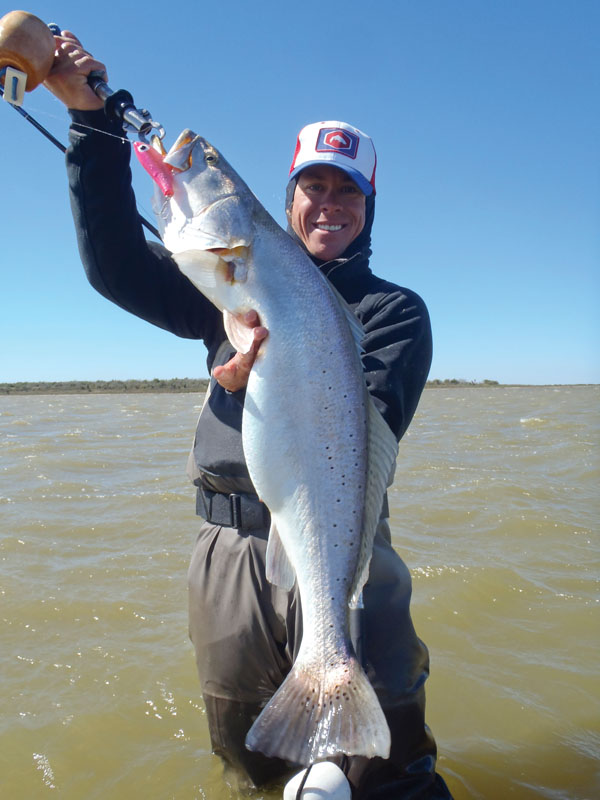 I typically begin my seasonal articles with something like "This is my favorite season" but the truth is they are all my favorite. I think most people that really love fishing feel similarly, excited to explore the new seasonal patterns as they evolve. Unraveling these puzzles can be very challenging and also very rewarding through your progression as an angler. My job would not be nearly as enjoyable without them.

Spring offers a vast variety of weather patterns. For example: one day this past week we had normal spring high tides with upper-70s air temps. The next day the tides were completely gone with the passage of a late-season front, and the temperature dropped into the upper 40s. It soon warmed to the low-60s but the huge swing in conditions killed the bite we had been enjoying. High atmospheric pressure set in, normal for post-front, and it got tougher than tough.

Where did they go or are did they simply become too uncomfortable to feed?

Fish can certainly move, more than we might ever believe at times, but I think it's more the sudden weather change that puts them in a mixed-up mood. Unsure of what might happen next they put on the blinders and try to ride out the uncertainty until conditions stabilize.

I shot a DVD not too many months back on post-front high-pressure fishing tactics. Perhaps my most boring ever but the content is dead-on accurate and the fish helped me prove the point. If anglers are savvy enough, they will see the value of the little things we discuss in the presentation. In this article I will try to give some explanations to improve your angling odds when things go-a-changing.

We know that many of the bay's fish-holding structures do not move during our average weather changes. These would be reefs, points, drop-offs and drains. Sandbars on low tides become exposed and bottom grasses come and go by the season. Forage, though, is another matter altogether.

Baitfish schools move during sudden weather changes and sometimes become very difficult to locate during the post-front period. Most all the really good anglers I know pay specific attention to locations where substantial and predictable forage sources are in evidence. This is the absolute first thing I search for following a major weather change in any seasonal pattern.

Spring includes pre-spawn and spawning season for speckled trout. Spawning activity is all about stability in water temperature, salinity and substantial food sources. When we have drops in water levels and water temperatures, the spawning sequence is interrupted and what was the norm is no longer the case, it seems to me.

If I have located an area where bait has been present and bottom structure adequate to provide cover for bait and trout alike, I stick close to this area even when the fish seem not to be eating. I search out small nuances in the surrounding area that might provide additional hideouts. Pre-spawn trout can be hard to catch at times, maybe it is the pregnant female thing–easy to understand if you've ever had a pregnant wife. Pickles and ice cream one minute and the next it's mustard and sardines. I certainly don't believe fish are that much like humans, I am merely trying to interject a little humor. Even with pre-spawn fish that can be tricky to please, we can tweak our methods and many times get them to eat.

It's a common belief (and truth) that you'll find both trout and reds at the mouths of lake drains when tides have continued to remain low. What many do not know is that trout, really good ones sometimes, actually move higher in the drains than redfish will. I find that when seasonal patterns are interrupted, trout will often congregate in narrow bends or simply more narrow stretches of the drains.

Two things are accomplished here, I believe. One- the bait is more concentrated due to the natural confines of the waterway. Second- current velocity increases around turns and bends, and also anytime flow becomes funneled into a narrower section. This increase in velocity scours the drain deeper in that location. Deeper and darker is often the key to getting trout to bite under conditions that are not normal for the season.

I am running into this exact scenario as I get this piece ready for publication. Trout are up in the bends and narrows of the drains while the reds are on the outside points, mostly on the NE side during prevailing SE wind. Before the front arrived the trout were scattered on grass beds along the outside shoreline, but in relative proximity to the mouths of the drains.

In the case of trout or reds that have been staged close to shallow reefs, the problem with quick drops in tides and water temperature is that these habitats are no longer suitable. With this said, I try to find and work reefs that are surrounded by slightly deeper, scattered shell. I refer to it as mud-shell because the bottom is typically softer a short distance from the main body of the reef. The shell I'm describing is typically found in clumps and has a slightly higher profile. If you pick one up you will see that it is actually a group of oysters clumped together.

Some anglers shy from mud-shell in the belief that it is too hard to wade and easy to hang a lure on, especially soft plastics. But I disagree. Try working slowly and carefully, be very conscious of your footing, feeling with your feet to avoid stumbling or bogging down. Switch to a lighter jighead to avoid hanging up and try to develop a quicker wrist action when twitching the lure. Mickey Eastman has the most fluid one I have ever seen.

I have clients that do not fish this type of structure well so I normally just try to stay away from putting them in an area where they're not proficient. No point in trying to turn a defensive lineman into a return specialist!

It is very important to at least see a few mullet working the area of scattered shell before committing to working it. This is not such a big deal in the drains because here the fish can be patiently waiting to ambush the food when it comes by. Over the scattered shell I really have to see bait activity of some kind before I can really get out with confidence and commit to working the area. During seasonal changes like the ones I have described it is so important to be able to settle in and believe you can make it happen. I had a couple of days this week that I thought I had forgotten how to do it myself, so don't be too hard on yourself if at first you don't succeed. Practice does not always make perfect but it certainly increases your odds.

The photos in this month's article are not from the conditions described in this article. Instead they are of Jay Ray and myself with three fish over 10- pounds the last week of February. Jay Ray had one over 11 pounds and one right at 10-. Mine was over 10 as well. I wanted to recognize his two personal best fish and tell him how lucky I feel to have been there with him. You see, we may never pass that way again, in that moment and time it was one of life's greatest moments. Like the 10-pound bass I caught with Ryan that hot July day on Lake Nacogdoches. Hopefully we will all have more moments but, if we don't, I am good with these. Those two boys of mine; what a blessing they have been to me.