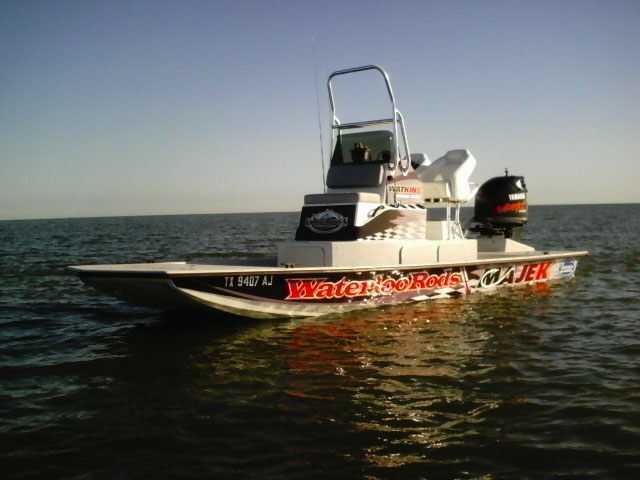 I know that some of you already hate me and have not even finished reading the first sentence. The title of this month's article stirs deep emotions in many saltwater anglers. But before we lace up the boxing gloves, let me get a few facts about me straight.

I own a Majek Illusion, commonly known as a burn boat, the absolute best performing shallow water boat I have ever owned. The materials and workmanship in this boat are classic MAJEK, and it goes without saying that the Majek name stands for quality before and after the sale. I use the boat's shallow planing capability to find fish for myself, my clients, and for locating the right fish for tournament situations. I do not run over other fishermen or run areas that I know are already holding fish. I respect others rights while on the water even though I get run over and cut off more times than anyone reading this might imagine. I had two guys drop an anchor so close to me in a slough the other day that I had to step over it to get back to my boat! What goes around comes around and typically it increases its speed as it makes its way back to us. I know there are more than a few of you out there that have had bad encounters with vessels capable of burning as well as those simply designed to get us from point A to point B.

We need to define BURNING before we go further. My definition of burning is: Running slow enough, shallow enough, in calm enough, clear enough, water to see baitfish, gamefish and bottom structure - without destruction of seagrasses, and all of this from an elevated position on the boat.

One can burn shallow water with many types of boats and many different styles of elevation. I see top-drives on shallow tunnel hulls and step ladders fastened with tie downs in deeper V-bottomed hulls. All are extremely effective when the right pair of eyes are peering into the water. For years guides and non-guides using airboats have simply run until they spotted the fish in the back lakes or along shorelines from the higher than normal vantage point. The method is as popular today as it was 20 years ago and still brings out the worst in us when we feel such a boat has ruined our day. The fact is an airboat disturbs us way more than it disturbs seagrasses or gamefish. Some do not believe this but it is true.

If burning totally spooked the fish to the point of not being able to catch them it would not have grown so popular. This is not to say that in shallow lakes the presence of a large boat running on plane can not and will not spook fish, it does. This is especially true when the fish have little deep water to move to for security. Add a deep gut or drop-off and the fish will run to it and then return shortly, ready to eat in many cases. Methods that prevent anglers from catching fish find themselves on a dusty back shelf in the proven saltwater fishing tactics library.

The 2007 TPWD digest includes an addition to a FISH HARASSMENT law already on the books. This new part of the law addresses the harassment of gamefish with ANY TYPE VESSEL, the original language was aimed more specifically at AIR BOATS and was probably more applicable to rallying of migratory birds. The key here is in defining what constitutes HARASSMENT and how does it differ from the legitimate PURSUIT of gamefish with the intention of catching them. This subject came to my attention during the 2007 redfish tournament season that Jay Ray and I recently completed.

To be perfectly honest I was unaware of any law that prohibited fishermen from locating fish and then catching them with the aid of a boat. In all my experience I have never heard of anyone being ticketed for harassment of gamefish. Years ago during the noted "redfish rodeo" days in California Hole where 30-plus boats would surround large schools of redfish; I often wondered how long the TPW guys would allow us to continue the tactic. I never saw a ticket written or ever heard mention of the word harassment from law enforcement. In those days the local wardens would sit outside the boats and check your fish as you exited the circled wagons. I was in the middle of many such rodeos or sat off to the side with my people waiting for the school to slip out of the circle so we could troll motor or pole towards them casting spoons and Cocahoe Minnows.

I know the past is boring so lets cut to the truth about this burning issue. After the recent FLW Redfish Tournament in Rockport the subject of harassment came up on lots of e-mails and message boards on the internet. I do not visit the message boards myself but do have tons of e-mails forwarded to me that have attached messages. After a few days of looking at these I was compelled to contact local and Austin-based TP&W law enforcement concerning the NEW addition to the law.

My question to them was simple What is harassment and what will you give me a ticket for. The way I look at it, I can afford to lose a tournament but, I cannot afford to be disqualified from an event due to failing a polygraph! I was told that the definition of harassment is very broad and writing tickets was not something they planned on doing. Numerous wardens stated that proving harassment would be almost impossible. I then asked if it was illegal or considered to be harassment for me to locate and then cast toward and catch redfish out of schools. Not against the law, they said. How about getting back up and running until I found them again and once again casting and catching? Still not against the law, was the answer.

It is not ILLEGAL to PURSUE gamefish with the intent to catch them. Pursuing is not a form of harassment; if it was illegal the airboat guys would have been shut down many years ago.

From my conversations with the officials it appears that through lack of clear definition, the harassment issue is something that is going to be difficult to enforce. With this said, it brings us to what I feel is the REAL problem, and that is general fishing ethic. Is it ethically responsible of us to locate and catch fish in this manner? Well, I am personally undecided. The main reason I say this is that I do not see the pursuit of fish in the manner I've described to be harming or depleting the numbers of fish any more than our normal fishing pressure. If you think just anyone with a shallow draft boat can effectively burn, locate, and then catch these fish you are mistaken. It is only a small percentage of anglers that have ALL of skill necessary to effectively and consistently make burning pay.

Let's get back to the ethics issue. Let me set the stage as to where I think we are in our small fishing world. We are all standing in a circle, looking down into a pit. Stones lay at our feet and the subject of burning lies below us. Some have already picked up stones and juggle them nervously in their hands. Others look for courage from those around them and some just don't feel right about the whole thing but could become followers. Remember this setting; we will return to it.

If running a boat designed to go shallow and therefore give us a visual advantage while searching for fish to ultimately catch is unethical, then we might want to take a closer look at some of the tactics we use to take other forms of game. I doubt anyone of us wants to hunt ducks without a spread of decoys. What about placing dove decoys in that dead mesquite tree? Are we are planting food plots, feeding protein and laying down corn just for the wellness of the deer, hogs and turkey with no intent of harvesting these animals? Do we implement tall blinds, hydraulic lifts and 4x4 trucks with top-drives to give us a better vantage point? What about a squealing rabbit call when varmint hunting? What about bird dogs; without pointers would we be as effective at locating and taking quail? When the birds flush and the dogs seek out the singles is this not some form of harassment? What about chumming, would gamefish come within easy casting distance without it?

Are you seeing what I am talking about here? How about some less conspicuous forms of unfair advantage. Do you use your GPS to mark safe paths, anchor locations, and place fish icons to pinpoint sweet spots so you can go back to the EXACT spot where that school of big trout are holding in severely cold temperatures? What about calling your buddies that are on fish and asking them where to go; would you be able to get on them without their help?

Ever watched somebody catch fish and then tried to beat him to that same location the next day by leaving the dock before daylight? What about using the cell phone to see if others in your network are catching fish in other locales? I hope you see where I am going. I am guilty of some of the above mentioned examples and I do not feel that it is unfair nor do I feel it is a form of harassment.

Is there a solution? I think so, and I think each one of us holds the key. It's called caring about your fellow fishermen and it is treating them with the respect you would like to be treated with. If a kayak is in your favorite lake, don't run over him to get to where you want to be. Yes you have just as much right to the water but he is already there. The way I see it, if you are in the lake first in your shallow draft boat, the kayaker should extend the same courtesy to you.

Don't burn shorelines with wade fishermen on them; run offshore until you are well out of their way. If we locate a school of fish and the methods we are using are impeding someone else's chances of catching fish, stop it, legal or not, it not right. It's simple; treat others in the same manner you would prefer to be treated.

All that I have mentioned in this article is my personal opinion and is meant to help us look at this issue in a different light. And even with all this being said, I still have mixed emotions.

In closing, if you've never been guilty of using any method that some might see as unfair advantage or possibly a form of harassment, then grab you a nice smooth round one and chunk away. As for me, I think I feel a whole lot better after having looked at myself in a truly honest light. I hate negative talk and controversy, it divides us and makes us easy marks for those wishing to shut us down. Ill feelings can fester like a sore. And left untreated, the result can be devastating.