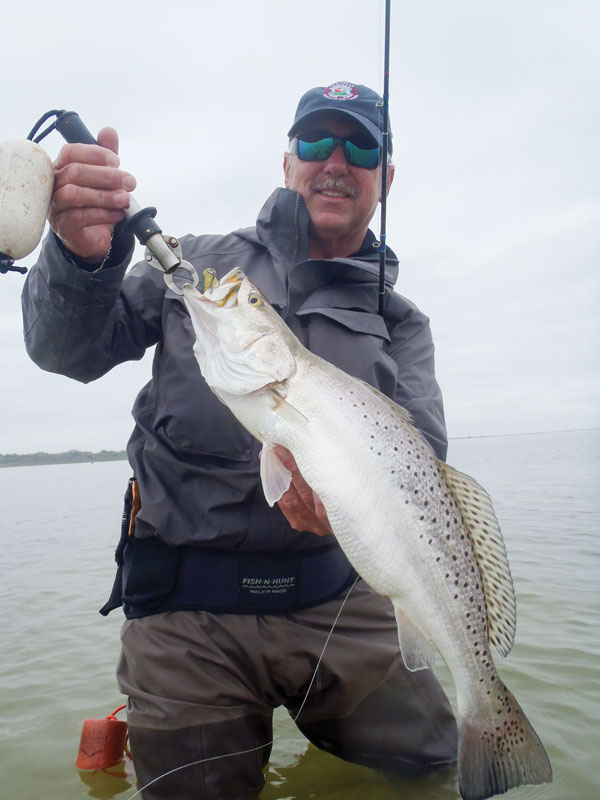 We have finally received a few fronts with some punch and they are having a positive impact on fishing. Water temps are now in the low 60s, which has triggered bait to begin seeking deeper water. If you are as enthusiastic about trout as I am, this is possibly the best time of the year for patterning and catching them.

Here's a frequently asked question. "So Jay, why do you continue to target trout shallow if cooler water sends them deep?"

The answer is slightly more complicated than I tend to make it sound but I am simplistic and boring by nature. So here goes the shallower the water the smaller the strike zone. Plus, we also have a phenomenon called daytime warming shallow water warms quicker than deep water. You might also say I have developed a shallow water groove in the way I fish, and trout "fish" better in shallow water, too.

The only way to truly gain confidence in the shallow winter pattern is to start your day shallow and stay shallow. Too many times as a young guide I would start shallow, only to abandon the pattern when results were not instant. I was too quick to push offshore and get my clients on bites to ease the boredom. Through the years my clients have allowed for a more serious approach to winter fishing and we now spend our days searching for special fish, not numbers.

The first element of wintertime success for larger trout lies in remaining pinpoint informed of changing weather patterns. True, fish seem to turn on as a front approaches. However, fish that are not present don't do much feeding prior to the front. Sarcastic I know but undeniably true.

Nobody can wave a magic wand and make fish appear where there are none. However, in an area that is holding fish, you'd swear one had been waved the way it can come alive under the right set of conditions. I focus my attention on being in the right place at the proper time and many times this is achieved by staying tuned into the solunar feeding predictions.

Along with the solunar, I also monitor tides and water temperatures by the day and by the hour. Slight changes in tide levels and surface water temperatures can critically alter the day's game plan. Good game planners are like good coaches, they are able to adjust to their opponents. The best of the best in fishing, hunting and coaching all share this quality. I aspire to become the Bill Belichick of the fishing world.

Once in an area, I always reconfirm the location of bottom structure and the placement of the resident forage - mullet this time of year. I find that areas which consistently maintain a concentration of baitfish are also where I most consistently find bigger trout. Quite often there are short windows in the day when I can catch some of these special fish. Big trout feed this way and the results can be so spectacular that you need to see it to believe it.

I believe it is critical that we stay out of areas where potential greatness can happen until the time is right. Motoring too close, burning over them or simply stomping around with them can produce a severe case of lockjaw from those very few very special creatures. Are they smart, as in intelligent? I don't know. But they are incredibly wary and they are creatures of habit. Disturb the pasture too much and they'll shut right down. If you're dead set on going to the area and staying the entire day, hoping to be present when they feed, you definitely need to know where the fish are positioned and position yourself on the outer edges. NEVER penetrate the zone!

Slow is the key as you approach the area. It is very disturbing to me when guys push quickly forward through the zone when bites do not come instantly. Seldom will this work, so work slowly and diligently, the best trout fishermen do this the best.

During my approach, I am typically reading every sign I can identify. One of the most positive is mullet flipping frequently or short-hopping within a specific area. They do this out of instinct when predators are present, even when the predators are not feeding.

The osprey or brown pelican that continues to hover but does not necessarily dive into the water is another. You think maybe they are seeing fish that are too large for them grab? Could those be big trout or redfish? Ospreys, by the way, are my go-to avian species in the winter months for locating big trout in shallow water. Find an osprey and you've found mullet. Where you find mullet, you will likely also find trout.

Yesterday was a perfect example. Air temp was 48 at sunrise and the surface water temp had fallen 5 in the previous 24 hours. This is significant to fish. We had a moonset minor prior to the noon hour. NE wind was almost 20 mph but the sky was clear, so warming was on the way. Tides had dropped overnight but were incoming until 11:00 am. The morning was setting up to be right, long about the time the surface warming was kicking in.

Several short wades in areas with limited baitfish activity produced a few bites but I assured my group that any thoughts of it not being a good day should be dashed. Heading to our third spot I noticed an osprey circling a piece of shoreline where the water change the wind had created pulled in closer to the shoreline drop-off. Dirty or sandy water from offshore that moves in and covers the preferred bottom structure is a pattern I seldom overlook. Positioning the boat about 100 yards from our target area, we slowly fished our way there. The osprey had been joined by a brown pelican. Neither hit the water but both continued to circle a very specific area of shoreline. Easing forward, we began to notice the reason for their curiosity as mullet flipped randomly, all within the zone of their hovering. The bait was not very active and the water depth was 2.5 to 3 feet. My belief is that as the mullet moved along the color change over submerged grass beds (that we could not see but I knew were there), trout situated on the structure were not eating but spooking them. Without any doubt, I believe that a predator's presence alone is reason for baitfish to flee. No science, just years of observation.

Arriving to the area of the mullet activity, light but definite bites started to come. Solid trout, nice ones to 4-pounds, along with redfish to 30-inches. Very slow grind over the next hour and forty-five minutes produced 20 or so trout and 5 redfish within a very small area. As the level of aggression increased with the moonset, our avian friends became active as well. The osprey got hers on the second trip to the water and flew off to the nearest perch to dine while the pelican worked right along with us, catching one here and there. No other pelicans joined the feed, and no other anglers. We had it all to ourselves.

This pattern will repeat often over the next few months. As water temperatures drop and baitfish become more scarce, the aggression and the size of the trout and reds found will increase. The very best trout I will catch will be during this time frame.

By the time this article hits the stores I will be in Port Mansfield. I look forward to the solitude this very special community provides. It is truly one of the last trophy trout meccas, which is the reason mine and Jay Ray's clients are asked to practice catch and release. On occasion, we keep a few reds for the grill or a few small trout for ceviche. Other than that, the rest go back to the water. I ask that you do the same when you have plenty of fish in your freezer. Hey, the less you have at home the more reasons for a fishing trip and a few fresh fillets.