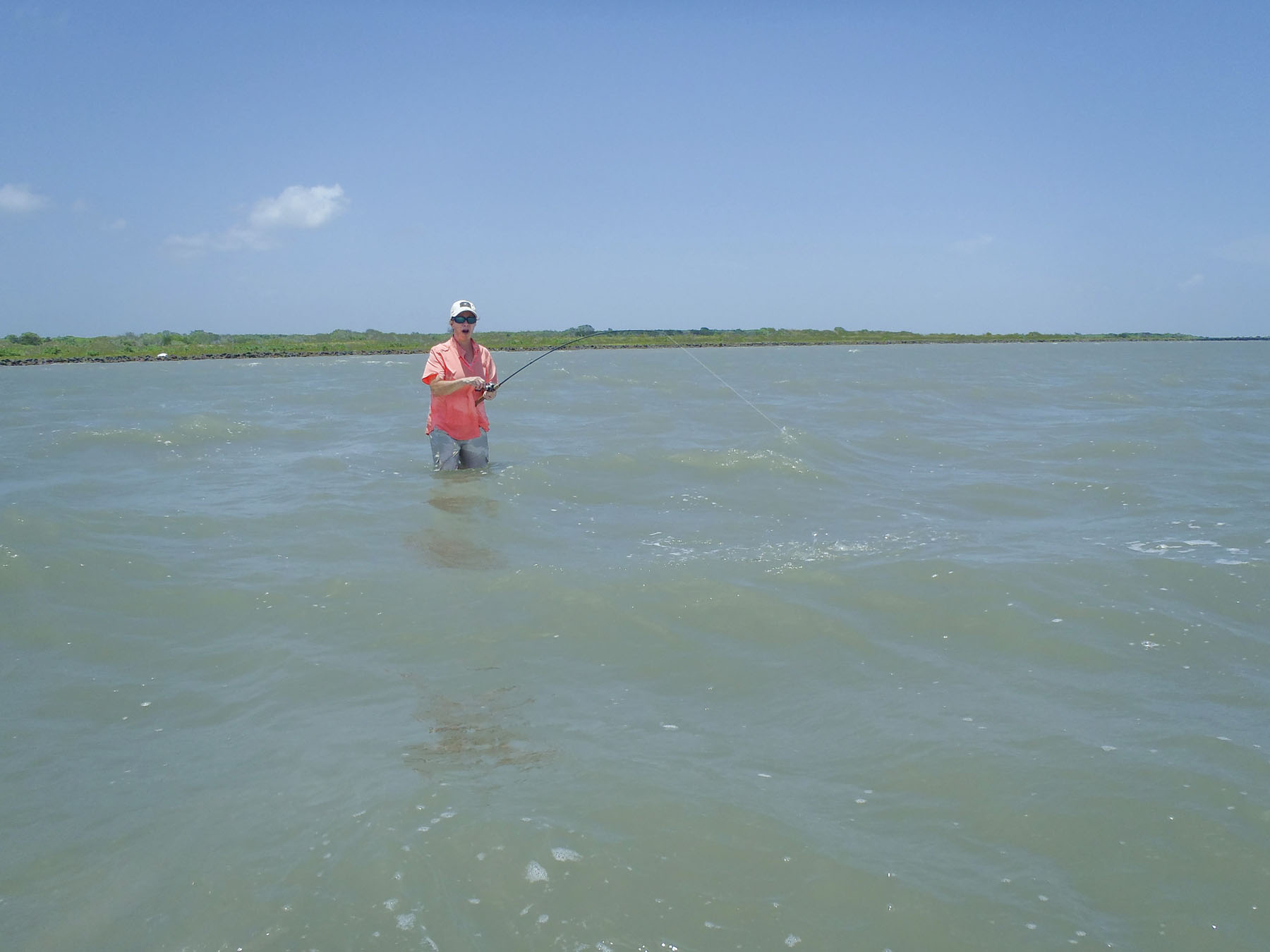 Renee fighting really solid trout that I dropped before we could make a photo. The look on her face was priceless.
It sure got calm and hot in a hurry. The daily 25-plus winds has laid considerably and bay water temps shot into the mid-80s almost overnight. While this is normal for August, given the tougher-than-average trout year we've been experiencing, it seems worse–at least to me.

So last month we talked about improving skills and working on staying power once good sign is located and confidence levels are high. I also touched on the importance of getting on the water early and working adjacent to nighttime feeding areas. Nighttime feeding becomes prevalent due to several factors: Excessive daytime heating, near non-stop boat traffic on shorelines, and also moon phases. Personally, I believe that most predators feed under cover of darkness in response to the daytime activities of man. If I did not make my living guiding I would probably fish mostly at night, and not just during the brightness of full moons. I know several exceptional anglers who fish almost exclusively at night and their stories confirm my thoughts.

With super-heated water and winds increasing by early afternoon we have to think about the effect this has on fish and also fishermen. I run a lot of half-day stuff July through September. I do this because many of my clients (me too) want to get our catching done before WE get too hot. Cooler water temperatures and fish exiting their nighttime haunts can provide terrific early morning action as many will take one more quick meal before calling it good.

This game plan has served well in the past but 2014 has found me wading the best of everything and still not putting my clients on the fish they deserve. I take my job seriously and even though we throw only lures, I still believe day in and day out, I can put them in areas where catching can't be much better no matter your choice of bait.

So what's been different in 2014? Boat pressure has been extreme this summer around Rockport. The oil boom is boosting our economy and boat launches from Marker 37 to Goose Island are jam-packed on weekends and week-days alike and nearly all shorelines and mid-bay reefs have someone on them constantly. You're forced to carve out small areas that contain the proper structure and a food source and simply put in your time. Trying to run from one hot spot to another seldom works as there are no so-called secret spots anymore.

So what happens when morning feeding fades and you're faced with more wind, lower tides, and extreme water temperatures? The first thing that happens is that long about midday you find yourself having most of the shallow water spoils and shorelines all to yourself. When I see this type of effort pattern developing I often suggest afternoon trips, starting around 4:00 and finishing just after sundown. Here is my take on why I think late afternoon and early evening can yield some of the best fishing.

Let's say you buy my theory about predators adapting to nighttime-oriented feeding. If they are shallow at night, and I know they are because my commercial flounder buddies have been telling me this for years, where do they go during the day? Well, obviously, they go deep and stay deep until later in the day.

As dusk approaches these fish will start to move shallower, closer to their feeding areas. Key here is knowing where the travel corridor is located. In my area I like to concentrate on areas of slightly deeper water along spoils and shorelines as well as areas in front of marsh drains. As water exits the marsh it fans out and forms a mini-delta, much like we see from aerial photographs of river mouths. Water movement attracts them to feeding areas and brings them food as well, it's the best of both worlds. The only thing that makes it sweeter is predicting the movement and then positioning to take full advantage. Let it be noted that I have documented many times–the guys standing closest to the deeper water start getting bites first. This proves that the fish are pulling up from the deeper water where they have been all day.

For the past week thoughts of late afternoon feeds haunted me due to the slow catching on my morning trips. When I received a last minute cancellation for Saturday I suggested to Renee that we go fishing. She informed me that she had to take her son to the Corpus airport on Saturday morning and she also had some gardening projects in preparation for selling the house. We are downsizing now that it is only three of us living here. Long story short, our fishing got pushed later into the afternoon. I certainly didn't mind and Renee was really anxious as she loves catching as much as cooking and eating them. As I type this she is sipping wine and preparing fish tacos, and it smells delicious.

We hit the ICW spoil in San Antonio Bay around 3:45 and found the water a dirty green due to 20-ish SE wind. Whitecaps broke on shallow offshore bars in the low afternoon tides. I asked her if she could see the dark grass beds that formed an outer underwater line and she nodded yes.

Guys, take note here. Outfitting your wife with the best gear is a must. You can't teach her the right twitch without the same rod as you use. She won't feel the bites she gets unless it's the same modulus and sensitivity as yours. If the reel's ratio is different her lure will not run the same. Do not tie her a heavier jig simply for casting distance. Teach her to throw a 1/16, if that's what you're using. It'll take some practice in the yard but if that's what you're using, that's what she needs. Her line needs to be exactly the same as yours. Comfortable wading boots are a must and let's face it, Simms has the best women's line on the market today. Your lady needs to feel like she looks good in order to play good. You need to make her understand that you are her fishing coach (not just a husband or boyfriend) and coaches want their players to succeed for themselves, not for the coach. Coaches are allowed a few barks, so toughen up ladies. At this point I should have run most of you guys credit cards up to a point where you hate me, but believe me, it's a small price if you really want her fishing with you.

We positioned ourselves offshore of the outer grass beds in thigh-deep water. Water temperature was 86 and the air was 94. I stuck the first fish and then she upped me with a very solid 4 1/2 pound trout that we quickly released. OK, so I dropped it, but we were going to release it anyway. For the next two hours she went crazy catching two more trout, three reds and four flounder. I caught a few dragging up the rear but honestly it was such fun watching her enjoy the afternoon.

She said, "I thought you said fishing's been tough." I just smiled, knowing I was not going to be able to explain that one. So the thought that fishing could be better in the late afternoon due to traffic and nighttime feeding was true for this day and it is a pattern that I have honestly put on the back burner for a few summers. See–fishing and continually being able to find and catch them is as much a mental process as it is physical. If you can think like a fish, and then physically put yourself to the test, you'll often be successful. It is not an exact science and I honestly know that I'll never totally figure it all out.

So thank you Renee and all my clients that share the passion for my passion. It's a passion to learn and get better with every trip. To learn why, where, when and how; putting ourselves to the test with every trip and taking pride in the fact that our way, the Jay way, is tougher. But we can become better anglers. Fishing is all about getting out there and kicking their butt, then letting that butt go so it becomes wiser and harder to catch the next time.

Finally, Renee I appreciate you wanting to love what I love and being such a good student. As we enter our empty-nesting years we will spend more days fishing together and with our grandchildren. Fishing will provide us with memories that will sustain us in our later years. I love you!