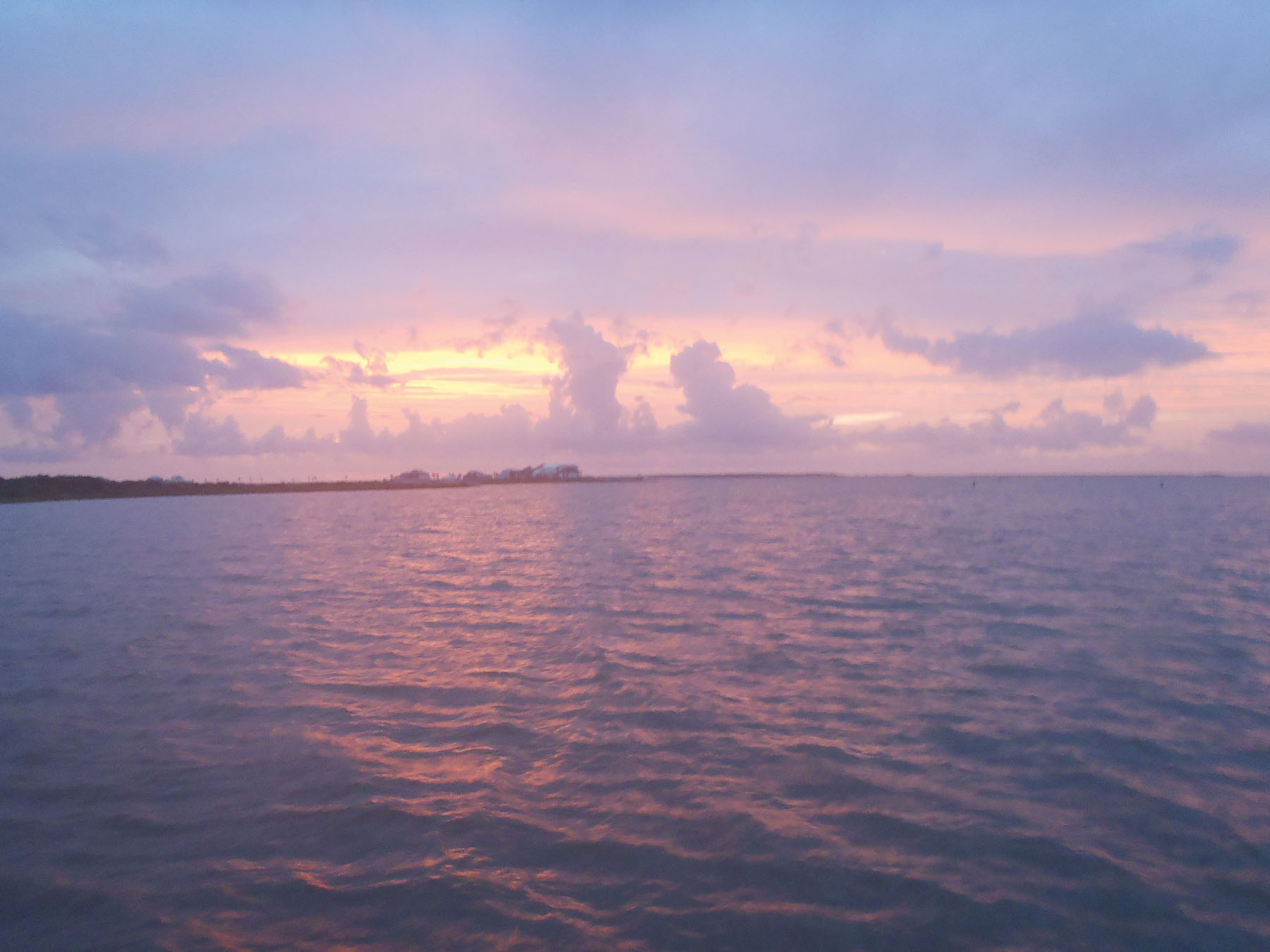 View from my office window the past 35 years.
Fishing is my life. Those who know me well or have fished with me know that I take my fishing very seriously. But not all fishermen do. I wrestled with this in the early part of my guiding career; that some were not as gung-ho. But I have matured over the years (somewhat).

It finally sunk in that many less-serious anglers gain as much or more joy from fishing than the hardwired types. On the enjoyment meter; if there is such a thing, being totally serious all the time can wear on folks around you. I am sure that throughout the years of taking my boys and their friends fishing, behind my back, they laughed at how anal I was about so many things. As I enter a new stage in my guiding career I am starting to realize that many of those booking with me enjoy all the things that go along with fishing just as much as the actual catching. Call me a work in progress.

Sometimes it's the funny things that we remember versus the fish we caught, or did not catch. Personally, I've had many trips where I remember comic events and cannot for the life of me recall what we caught. I want to tell you some stories about serious issues, in a humorous way; I hope you will be entertained. No names will be mentioned and I mean no disrespect to those that have provided the laughter. I heard once that laughter was life's best medicine.

A few years ago I was fortunate to fish a Bass Champs tournament on Falcon Lake with my youngest son, Ryan. We pre-fished and found some 6- to 7 pound bass, which I thought to be great but, Ryan was not impressed. On tournament day we were one of about 300 teams and I honestly had never seen such a thing.

I backed Ryan down the launch ramp and spent the next 15 minutes trying to park the truck. The lake was extremely low and trucks and trailers were parked every which way. Once on the lake and fishing I found myself picking up lures and putting them back in the proper boxes. Before every move I would put everything away in its proper place. When Ryan would catch a bass I would try to help him. I found myself in his way and messing up his whole fishing sequence. It would have been hilarious to watch.

Finally he turned to me and said, "Dad, just fish! Don't worry what the boat looks like or if I can handle getting my fish in the boat." I was driving him crazy and preventing him from doing what he does. We laughed all the way home after our 83rd place finish.

Both Jay Ray and Ryan do a great impression of me holding onto the console grab rail at any speed over 50 mph. Funny to them but not so much to me.

I had a group of guys show up and get on the boat with a ton of gear. They had a variety of rod and reel combos, baitcast and spinning, all with mono line, half-full or less. Now our line is the only thing between us and the fish and it's also probably the least expensive part of a tripbraid included. In my younger years I would have lost any hope of receiving a tip right there...probably would have gone like this:

Me: "Truthfully, the lure was not in the air long enough for me to tell. Your form is pretty good but your distance is lacking."

One of the gentlemen in the group finally hooked a nice fish but after about a ten yard run he was spooled and the line broke. Actually, I think the tape he had holding it to the spool came off. Anyway, we put new line on his reel and the guy spent the rest of the day admiring the distance of each cast.

I had a guy ask me one time if I thought the weight of the jighead made any difference. I guess he thought the manufacturers make all those different sizes for the heck of it.

Or the guy that asked, "Why do you use jigs with such tiny hooks, don't you think the larger mouth of a larger fish warrants a bigger hook?"

Or the guy that wanted me to teach him–and after the explanation of why we were going to use a 5" bone diamond Bass Assassin–asked whether the pink and gold deep-diving Border Jumper he had tied on might work.

I had a group show up with not one thing I had told them they needed–and then proceeded to inform me that some guy at the restaurant said they did not need to wade to catch trout. That might have been true, if they were fishing with him. I took a $650.00 loss that day–sent them and their 12-pack packing. Not funny to me or them at the time but everyone else at the dock found it quite amusing. I have matured since then. If that happened today I would just get them in the boat, secretly jerk the kill switch keeper, and cancel the day due to engine problems.

Had a guy show up and tell me that he knew I did not like my wading people using landing nets, but he needed to. He had this handcrafted little wooden beauty with about a 10 inch mouth. Nice net. But a 15 inch trout wouldn't fit in it. If you're going to drag a net, at least bring one that will hold a decent-sized fish.

One of the funniest was a guy that showed up with waders and wading shoes still in the box. Two left shoes, one size 12 and the other size 9. I told him that at least one of his feet would be comfortable. He then informed that he wore size 10!

One of the best-ever was the macho guy that brought his young son on a wade trip and, despite my insistence, they came in shorts. The jellies were very bad. Fishing was great in the moving water around the mid-bay reef, fast and furious. I was constantly stringing trout and watching for jellyfish. In the midst of things I missed seeing one being pulled along in the current and it wrapped the boy's legs and really lit him up. Tears welling in his eyes, the dad warned, "Don't be a wimp!" Quickly shifting from guide mode to dad, I assured the youngster that I understood how much it hurt and we took a short boat break. The sting subsided and we were soon back in the water, on high alert.

We'd worked our way to a gut that ran through the reef and I commented this was where the better fish would be. Ol' Dad jumped ahead of me and the boy, intent on big trout. Landing several he forgot about the jellies. Suddenly a brute of a jellyfish appeared about 3 feet up-current from him. The youngster was about to warn him when I placed my hand over his mouth. It was amazing how quickly the big man became a little boy. The language he spewed and the gyrations of his legs and body was enough to make me bust out laughing. I commented to the son, "Your dad is acting kind of wimpy, huh?" Never saw them again.

The absolute worst and funniest was on yours truly in my young and stupid years. I had a very nice gentleman bring his son and he wanted to drift rather than wade as the son had some physical challenges. Back then catching trout and reds in big numbers was pretty much a guarantee if you could cast. I helped the duo onto the boat at Palm Harbor and we made the short run to Estes Flats. They both looked perfectly normal to me. They even had the best polarized sunglasses of that day. I was impressed.

Spoons were working like champs and we were into the fish left and right. I coached the young man numerous times about reeling them too close to the rod tip and to lead them to the net so I could boat them. As the morning progressed I became frustrated that he did it the same way every time. Finally I suggested that he might be deaf. That's when the dad told me he was not deaf; he was blind!

Wow! I was so embarrassed. I just sat down and looked at my feet, trying to decide which to shove in my mouth. They laughed it off saying that they should have told me. You think?

I had a guy with a prosthetic leg fish with me and he fell overboard on a hookset. I went into panic mode trying to grab him in the choppy water. He calmly told me, "I'm OK but grab that darned leg, it came off and it's beating me to death in these waves." We laughed a lot once I got him back in the boat.

Last one is another on me. Busy day at Cove Harbor, I was in line to put my 23 Haynie Cat on the trailer when a client and friend backed his 21 Haynie down to launch for an afternoon trip. We talked briefly as he backed it off and I walked to get in mine, further down the dock. Another guy asked me a question and in answering I became distracted. Now I can put a boat on a trailer in my sleep. Ran it up to the trailer stop and killed the engine. The boat slipped backward, which surprised me, but I simply restarted the engine and bumped the stop again. It slid back a second time. Just then, Vince, the owner of the 21 Haynie, walked up and asked me how I liked his trailer. I was dumbfounded and did not snap-to until he climbed into the truck the trailer was hitched to and began to leave. Turns out 23-Haynie Cats do not fit well on trailers built for 21s. My truck was right next to his. We still laugh about it.

So the lighter side of fishing is sometimes the best part of the day. Try to remember all the good times whether you catch them or not. I think it's true; laughter is life's best medicine.