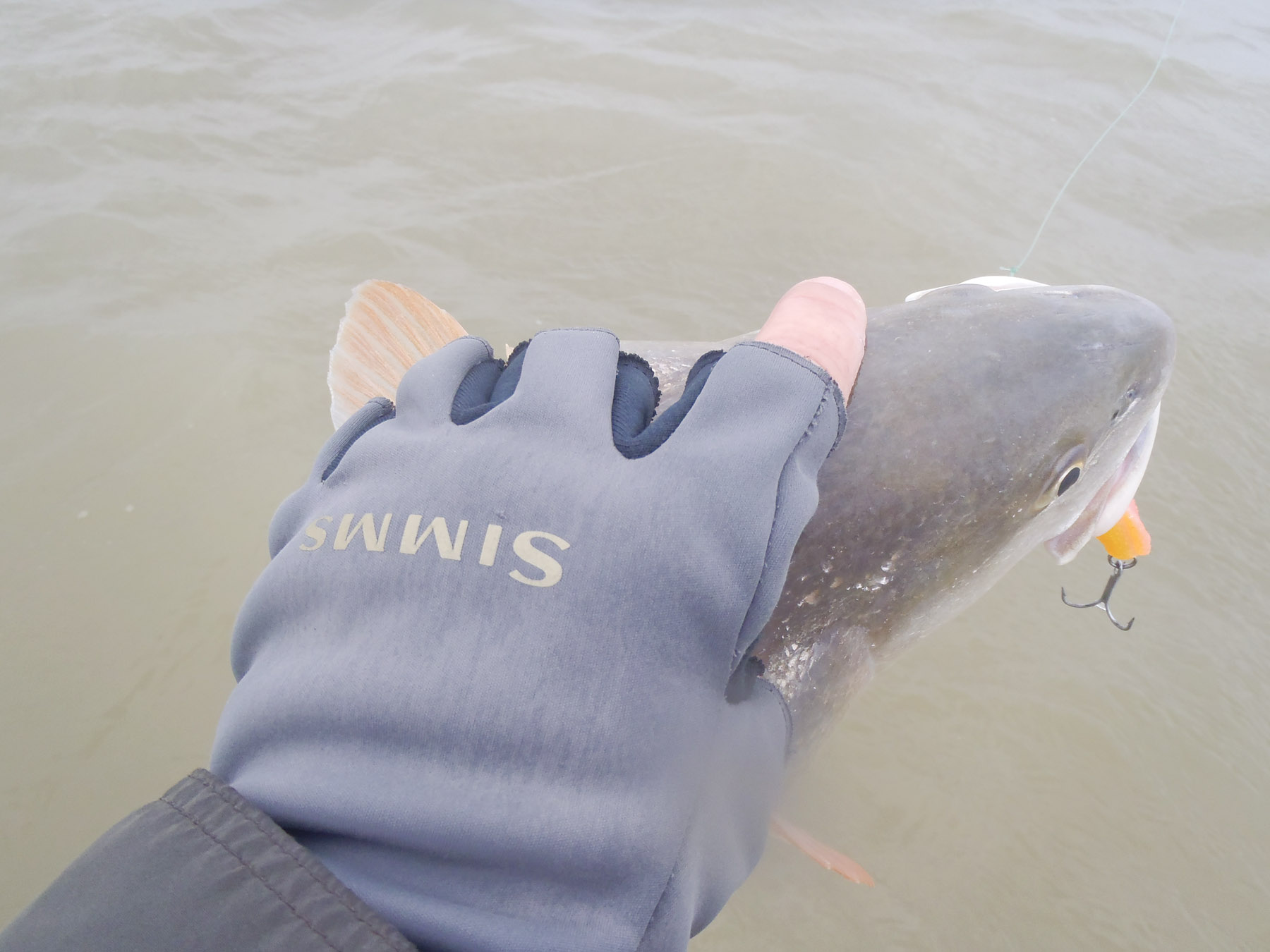 Simms fingerless gloves are a must for me during cold weather.

Without a doubt winter is my favorite season to fish. There are multiple reasons behind this with the biggest being the possibility of catching one of the year's best speckled trout. This said, it is also the season when we absolutely must have the right gear. I have a lot of anglers that ask, How do you cope with the harsh conditions, the cold, wet, and wind?

Years ago we did not have the luxury of the high-quality foul weather apparel available to us today. I know everyone that fishes with me understands how I feel about Simms Fishing Products. The reason I feel this way is solely because I believe they currently make the best waders, wading jackets, wading boots, under garments, and accessories on the market. How good are the products? I still wear my original wading jacket that I purchased over 10 years ago! Over the years my guys and gals have followed my lead and acquired these products and by doing so they have allowed themselves the comfort (opportunity) to stand in the cold and allow good things to happen on days when many choose to sit on the side lines.

Enough on quality gear equals comfort. Now let me talk to you about finding and catching fish in extremely cold water. In January of 2013 I had a week-long period where water temperatures dropped to 46 and the mercury for the next few days never rose more than two degrees. Winds were 20-plus out of the NE, tides low and water dirty. I know, sounds like one would have to be insane to be out there fishing in such conditions, and without proper gear you'd be correct.

I have a father-son duo that have fished with me for almost 20 years. Barry and Scott have come full circle in the gear department as well as the learning and confidence department. Even though we did get cold, we were not terribly uncomfortable on the three days they spent with me. I had located an area of soft bottom, scattered grass beds and signs of bait fish. Swirls in the shallow water and the ever present osprey and brown pelican assured me that mullet were present even during times when bait was not visible.

I was continually reminding the two that water temperatures had slowed the metabolic rate and activity of the fish. This was our first real cold spell, so game-fish had not become acclimated to the cold and reactions were slow. I also reminded myself and them that with a high speed reel it would be necessary to really concentrate on slowing retrieval rates. This is why during the coldest of times I will often switch to a reel with 5.3:1 gear ratio verses the higher 6.1:1 or 7.1:1 ratio. I'll also go to slow sink MirrOlures and Corkys or the Bass Assassin Die Dapper series rigged with a Mustad 3/0 Power Lock Plus with screw type bait keeper. The key is giving the fish a really good look and time to react to a size of bait that they seem to be preferring.

Bites came slow over the three-day period as the winds and water conditions remained less than good. Redfish dominated our catch but when a trout was caught it was a heavy fish with blistered bellies and tails. This is typically a sign of fish that have decreased their movements due to cold so parasites in the mud have the opportunity to attach themselves to a viable food source. When I see this I certainly know that we are in the right area to catch trout that possess the characteristics we all dream of. Even though we did not catch that trout of a lifetime, numerous reds were caught on two of the three days, keeping us focused during the long wades required to get the bites. With each day that passed, the next provided fish that hit harder and fought longer. They were becoming acclimated to the cold and started to react with more aggression. In the grand scheme of things the conditions are exactly what we want and need in order to have the best shots at an area's biggest and best.

The day after my guys left, we had a lull in the wind and slight shift in direction. More of an easterly wind but still air temperatures to start the day were in the mid 40s. By 3:00 PM the wind had swung to SE, ending a four-day absence of any warming as the skies began to clear and the sun popped out. Drastic change in air temperatures equate to rapidly warming shallow water temperatures. Coupling this with a late afternoon major feeding period created a fantastic opportunity to catch the area's big trout that had avoided capture for four days.

For the first time all week we saw mullet begin to first flip and then jump as the shallows absorbed the first warm rays of sun. Within two hours the water temperature had risen to the 50 mark and a trout feed was born. The feed continued into the dusk hours, producing trout to 6.5 pounds along with numerous thunderous strikes that somehow did not result with a hookup. I can't get a Corky out of the package or tied on my line without at least one of my fingers bleeding but a big trout can inhale it and spit it out without breaking the skin. Amazing!

So this is the lesson here: To fish in harsh conditions, we need the right stuff and the proper attitude. In my opinion, one cannot be accomplished without the other.