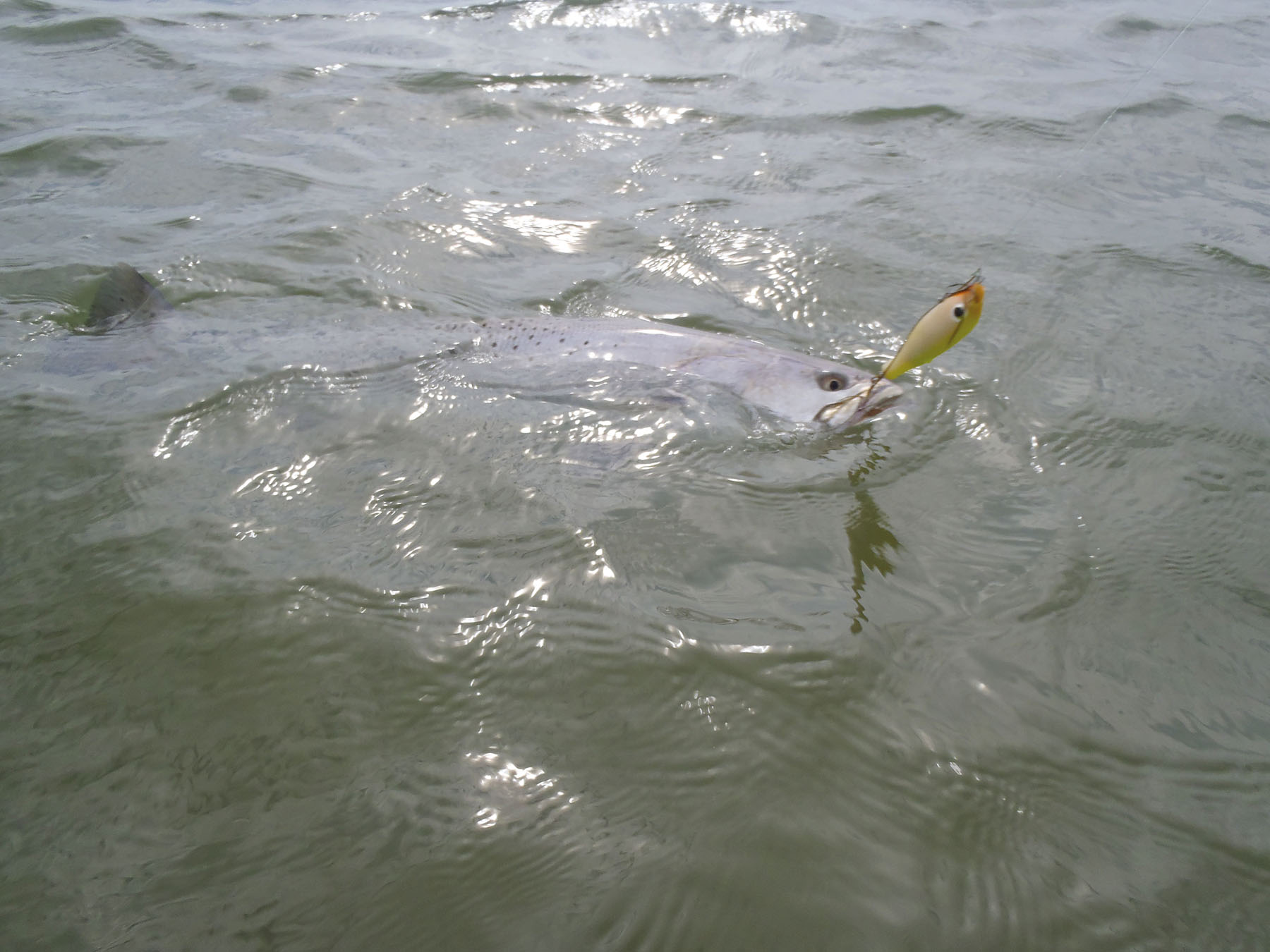 Never be afraid to throw your favorite Corky in the shallow stuff.
Catching some nice redfish on a recent trip along a line of potholes I made the comment that we might want to back out and let the area reload for a few hours. The idea of "letting the area reload" was brand-new to my group and it goes hand-in-hand with me saying for years that during a day of fishing with me one might hear a few things about fishing they've never heard before. I would like to follow that up by also saying that not even I believe my way is the only way but, it has certainly worked out well for me for many years.

My belief in the "reloading" concept began many years ago when fishing was almost always a lot of catching. Even in those good ol' days I would find that sweet spots along shorelines and around reefs would eventually show signs of depletion if I continued to make them my go-to areas.

I remember a conversation years ago with a fellow guide that waded with croakers, telling me he did not know what happened to all the fish he'd been catching in a certain area. He went on to say that he'd experienced almost two weeks of limits, however, in the past several days the bite had slowed and the numbers were way down.

No matter how good an area is, the population it will support is limited, so we need to let our areas rest or, as I call it–reload. I have no hard science but my 35-plus years of guiding the Rockport area certainly show the benefit of managing the number of fish we catch out of each area we use.

Even when practicing catch and release, I believe that fish sense the pressure and change their habits. I have members of my fishing club asking why I went to Copano on Tuesday when on Monday we had solid fish on the Runway in Mesquite. Truth is, I wanted to see if like areas with very similar layouts were also holding fish. And–I was allowing the Runway area some time to reload.

If I can locate four or five areas holding fish, I can then manage my days and the numbers of fish holding in those areas, never hitting any one of them too hard. My boys and I have always practiced under this pretense when scouting for tournaments and even during tournament hours. Recently in a Rudy's Redfish tournament, Ryan and I pulled back from an area that had given us eight or ten 6-plus pounders, to allow it to reload for a few hours. Our first two fish out of those potholes had been 7- to 7 pounders, so we knew bigger fish were present.

After the reload we found more had moved back into the area and many were slightly over the 28-inch mark, which told us that a few just-under-28s were likely available as well. It ultimately didn't pay off as hoped but it certainly could have, and I positively believe that had we stayed and pounded the area we would have pushed all the fish out for the entire day.

Reloading is a common practice in the bass community as they know that certain areas have all the right ingredients to continually attract fish. Problem is; catching fish educates them and puts their senses in high-gear, which can equate to shutting down the bite. A bass is a fish right? Just a freshwater environment verses saltwater. So are saltwater fish not capable of the same?

I think fish are more aware today than ever before of our presence. We educate them every day just by returning. I find myself fishing the fringes of smaller areas more often lately than ever before. Today, for instance, we stood in a small area of mud and submerged grass along a windward shore, fishing for 3 hours. Caught 10 slot fish in that time frame, lost a few, and had some undersized fish. I made certain that my guys were aware of the down-periods as the fish reloaded. We would catch a few and then it would go dead for maybe 30 minutes. Then a flurry where numerous fish were caught or bites received before the next lull. The nature of the area along the shoreline allowed for continual reloading IF we as the anglers were able to stand far enough away from the "hot" zone and allow the reloading process to repeat itself. I had it happen with Jay Ray in Port Mansfield last winter in a very similar area. IF you stood there and let the grass beds at a good cast's distance reload, a 6- to 8 pound trout was your reward. Over a four hour period we caught fourteen trout, the smallest just over 6-pounds!

With "tougher than tough" fishing this summer it has been imperative that you manage your water and try to manage the fish residing within. I have some loyal followers who despite the conditions have managed some exceptional days with these tools. I also have those that stroll through fish thinking two or three casts at a pothole or grass bed should be plenty. I am a big believer in covering water the right way, not simply covering a bunch a water. So when I take the few track stars I still have in my lineup I try to take them to areas where they can find fish the way they like to do it. That's my job.

Time was, when I got out of the boat I just took off; you followed or got left behind. I am still the bird dog because when leading I can control speed of the wade, angle of the cast and positioning in relation to structure. But–I want you right in my hip pocket so we are all working similar water. It is a well-known fact that if you see my boat–four guys lined up and standing still two or three hours–fish are being caught. By lining up and holding position we are allowing the structure in front of us to continually reload. Most days it happens with most anglers not even realizing. It took years of me walking through them and then finding the bite again on the way to the boat to realize what was happening. Nowadays I have a tremendous amount of confidence in the slowing-down process as well as the patience to let the pattern develop.

We see these mistakes not only by waders but also with drifters. Areas with high probability, potholes, grass beds, points and drains, deserve more than a few casts and to do this thoroughly, you have to stop walking or stick the Power Pole. And don't give up when the bite slows after a few fish. The piece of structure that attracted those few will attract more but you have to let it happen.

Tournaments are a great example. We do not want to spend our time running and gunning, so we work much more slowly in high probability areas. This has allowed me to witness the reloading process many times. Power drifting... drifting until fish are located is a good tool for locating but, once located and the area marked, you need to employ a slower more deliberate approach. Tournament play made me a better angler in my guiding business. I will say though, staying in the boat (when I'd rather be knee-deep) and working slowly across a flat takes extreme patience and confidence.

I have owned this confidence for many years but just over the past five have I gained the patience to pull it off. So try letting your favorite areas reload the next time you're out and start developing the confidence and patience you'll need to repeat the pattern time and time again. Winter is coming and I can't wait.