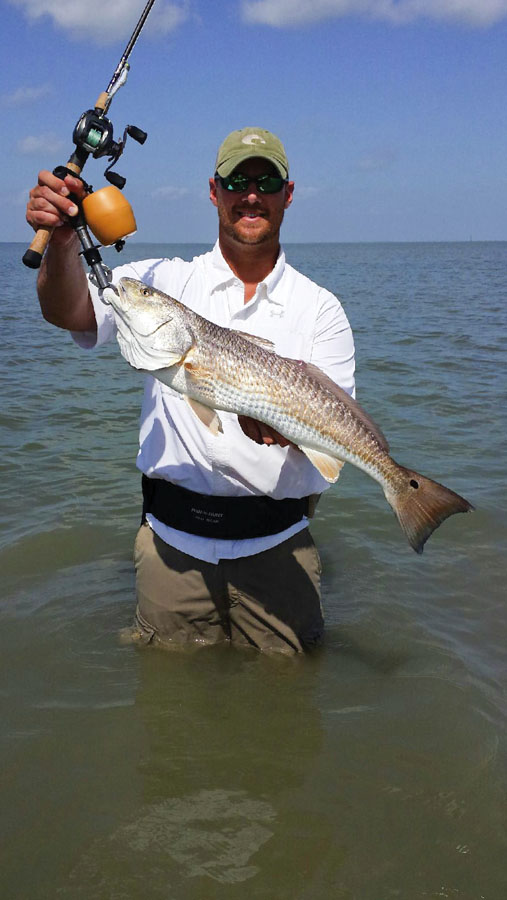 Thomas Gafford - Kansas City Chiefs deep-snap specialist, shows off a beautiful CPR redfish. Thomas is one of my Straight-A students. Show him once and he's good.
The period of mid-August through September is the toughest time of year for me to reliably pattern and catch solid trout. Luckily, we have redfish. With seasonally lower tides and the year's highest water temperatures, the reds are fairly predictable and become a mainstay when the trout bite is brief or they simply cannot be found. Found is the keyword.

There are three basic elements necessary for finding trout this time of year MOVING WATER, PREFERED STRUCTURE, and of course, FOOD. Always remember: "You can catch fish if you fish where they live." At no time of year is this more important.

After almost 35 years of guiding and a lifetime trying to figure them out, I have discovered a handful of areas that I believe become home to our resident trout, even late-summer. One of the biggest mistakes anglers make is assuming trout can only be caught in early morning hours. True, the best bite will at times be early this time of year but, time and again I consistently catch them adjacent to the areas I found them at daylight, much later in the day.

I think the biggest stumbling block to late-summer success is leaving an area as soon as the early bite wanes. Seldom do I have much success locating fish in a new area after that early bite has ceased. Over the years I have gained confidence in staying in the same general area. I told Mike McBride a long time ago; "M-M-Mike, you have to kno-know they ar-are there and be-believe you can catch them be-before you will." I stutter when I get excited and Mike imitates me to a T.

I may have to tweak my position or wait for conditions to develop but, by staying in the general area I typically generate another bite in the later hours of the morning. Quite often the guys I'm guiding are astonished with the presence of better than average trout as the hottest time of day approaches.

I mentioned tweaking position and waiting for conditions. The tweaking is controlled solely by the angler. If the food source and structure that provides ambush points are shallow in the early part of the day, you will often be best-served to continue your efforts in this general area. Slicks and curious pelicans or gulls will confirm that you're still in the zone.

As the sun rises, so will the air and surface water temperatures. This will lead the bait and gamefish alike to exit the primary early-feeding area and seek cooler refuge in the nearest deeper water. If this nearby deeper refuge has similar bottom structure; you're in luck. Sometimes a mere 30 to 50 yards can be the difference between catching or going through the motions as the day wears on. With that said; one should never just go through the casting and retrieving motions.

Cast and work your bait with diligence. You need to be casting to a designated area of structure and working the bait with purpose. In other words; fish like every cast is going to be met with a strike. Even during my nonstop yakking I am concentrating and believing that if not this cast, the next for sure will yield a bite.

In the waiting on conditions department; I am most often speaking of wind. In August and September our dawn conditions are often dead-calm. This is seldom good when fishing the inland shallows but can be excellent for fishing the Gulf beach. When they eventually reopen Cedar Bayou, and I am seeing the cup half-full here, I'll do more surf fishing simply because it will be easier on me and my clients. In the bay, with little to no wind early, I often have to wait till mid-morning for surface chop to trigger the feed.

I know for a fact that wave action increases oxygen content as I once kept a big trout alive in my live-well by continuously splashing the water with my hand. Jay Ray and I took turns driving and splashing. It might sound crazy but it kept us on the leader board. So as stated a million times, "Wind is our friend."

On low tide days, which can be many in August and September, the lack of water volume allows for sanding to occur readily along shorelines. Then, as the wind moves water, along comes distinct water color changes. It is common for such color changes to make up along dropoffs where tidal movements can drag two very different colors together. Think of these as safe zones for both prey and predator. When prey and predator come together good things happen for those of us savvy enough to fish these areas. It has taken years of grinding to gain the confidence I have today. Quite often I search specifically for color changes, closest to the site of early morning action, believing I will catch the best fish of the day in and around them.

My lure selection, which I know is limited compared to most trout gurus, changes in late summer. Still a good idea to fish dark baits in dark or dirty water or on dark days, and in general clear lures are great in clear water with bright sunshine. Having said that though, we should also consider using baits that mimic the forage our late-summer trout and redfish are seeking.

In our bigger middle-coast bays we have back-bay regions with some amount of fresh inflow. Copano has the Aransas and Mission rivers and numerous creeks. San Antonio has the Guadalupe River. Fresh water is the foundation of white shrimp habitat. Years back I remember wading the west shoreline of Copano and we were literally kicking up 12-count whites with every step. Large numbers of exceptional trout and oversized reds would school and push the shrimp, creating a virtual shrimp net of fish. You could almost set your calendar to the day this migration would start. Hynes Bay and Guadalupe-Mission Bay in the San Antonio system has the same migration each year.

So with this background on white shrimp, it only stands to reason that I would suggest you throw something white. I like the white 5" Bass Assassins on 1/16 or 1/8 ounce jigs and I'm big on their 2/0 or 1/0 short-shank Mustad hooks as well. MirrOlure Top Dog Jr and Pup in white or plain bone can be killers in shallow off-colored water when winds are up during midday hours. Rig the topwaters with single Mustad live bait hooks (R10827BLN), 1/0 or 2/0. I have found the single hooks work very well and few fish are lost when hooked.

Tough angling ahead, especially for those of us too stubborn to switch to live bait. But I hope that if you follow my suggestions you'll make it through and catch some nice fish as well. I like a good challenge and August-September is sure to give me one. At the beginning of this article I mentioned having discovered a few very reliable areas where I believe trout live year round and can be caught whenever fished. Bet you would love for me to tell you where they arehuh? Well, how about me showing you, and while we are out there maybe I can tweak a few things for you and provide you with the tools to become a better angler.