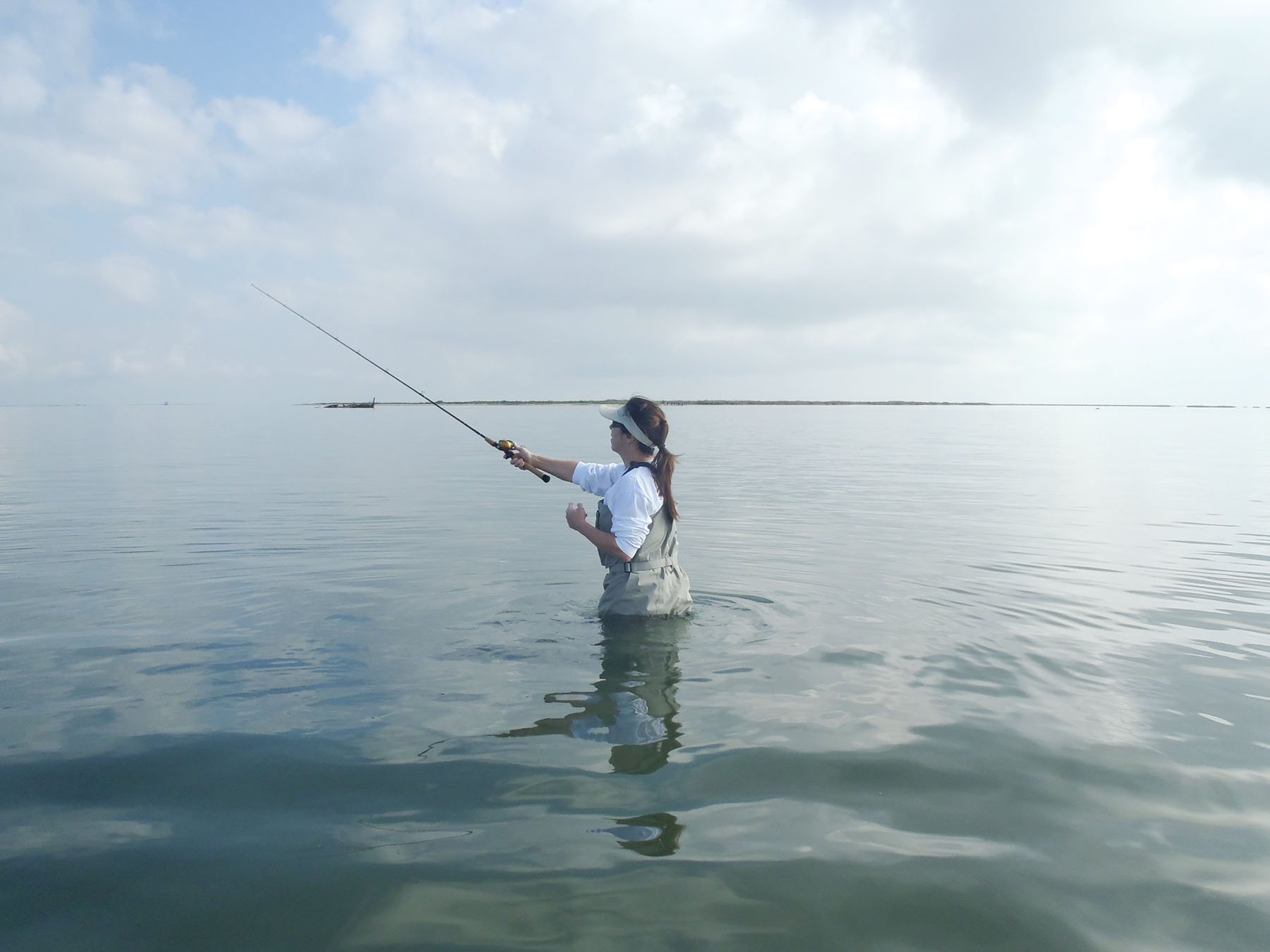 Beautiful calm conditions, great for fishing but tough for catching.

I am enjoying a good shallow water bite here in Rockport so far this spring. I owe my confidence in fishing shallow for trout to the amount of time and experience I have gained farther south where larger numbers of big trout prove to us time and time again just how much time upper-class trout spend shallow. I am almost convinced that they would live their life out shallow if excessive cold did not run them deeper from time to time.

Our numbers are generally decent working the shallow flats and we have landed a few very nice fish. I have personally landed a 7-plus fishing with my clients and Jennifer Ray caught an 8-pound trout just yesterday, both from water that was less than knee deep. All our shallow water fish are coming from areas of hard sand bottom with sparsely scattered grassbeds and shallow sand humps. The grass beds plus the sand humps create contour and help disguise the oversized residents.

While it is true that the current spawning activity is the reason for some of these trout inhabiting the shallow zones; I'm thinking that the more time we spend shallow the more big fish we might encounter. Mike McBride touched on this in his last article and his thoughts about why these fish go shallow and stay shallow is not always understood but possible reasons are many. Bottom line, they are where we find them and if we look shallow long enough we're bound to discover more of them in more of those out of the way places - and we might just have them all to ourselves.

Fishing shallow has numerous advantages and I'd like to touch on a few to help you catch more of them.

I have said a million times that the wind is our friend and never is this truer than when fishing shallow. Dead calm allows us to see more fish but it also usually equates to super-clear water and that can be the kiss of death. What we want is 15 to 20 mph wind, enough sun to see the structure, and a midday or early afternoon feed period (check your solunar chart.) That's a lot of want but we actually see a number of such days during May and early June. While in the want mode, I also prefer the midday feed because I can see fish better with the sun directly overhead.

I believe that well-placed casts and a developed sixth sense of where the bite will come are crucial to success. Winds 15 to 20 in my area of the coast will create a slight sanding of the water. This cloak of cover often dulls the wariness of big trout enough to allow us an opportunity to catch that truly special fish. Wind velocities in this range also allow for optimal casting distances which again I believe is a critical key to success.

Areas within a flat where bait activity appears most concentrated are often the best but, not always. Recently I have noticed that many of the bigger trout seem to be staged on the outer perimeter of the actual location of the bait. I certainly believe that big trout mingle with larger bait fish waiting for that perfect sized one mullet meal but, they also hang on the fringes because moving among them makes them spooky. We discover these things by being observant and diligent in our pursuit. Over the years I have noticed that many of my best fishermen are also hunters with strong predator intuition of their own.

One of the greatest advantages of fishing shallow is the lack of fishing pressure and this brings many positives to the fishing success equation. Here in the Rockport area we have many airboats that run the shorelines but most all of them are courteous and give us a wide berth. Maybe they recognize that the one short silhouette among three or four taller ones is me and that encourages good manners, but mostly I believe it is the demonstration of generally growing respect for fellow anglers and the desire to treat people right that treat them right. We certainly reap what we sow in this life.

Another thing you will notice is that once you are positioned on a flat most all of your fishing pressure will be from offshore traffic which can actually drive fish to the shallow water your already occupying. Just yesterday as a boat buzzed by closer than I like, I said to one of my guys, "Watch this - somebody is going to hookup," and sure enough we did.

The traffic pushes them off one grass bed to another. In their line of flight we stand and reap the rewards. I have applied this tactical approach further down the coast as well with just as much success. Too many times we do not pay attention to just how far away from boat traffic fish actually react.

The best story ever to illustrate this happened early in my guiding career. I was walking back to the boat via land one day many years ago in St. Charles Bay. I saw a nice redfish, back out of the water, grubbing its way towards me. I stopped so that the vibration from my footsteps walking on the bank would not spook it. About a half mile in the distance and at least 150 yards offshore, a small john boat was running in my direction. That fish turned and headed straight toward the drop-off. It did not bolt but moved at a steady pace until it disappeared. That fish reacted to boat noise at a greater distance than I would have imagined would disturb it.

That experience was etched into my memory and remains to this day. I know that boat traffic moves fish, might not totally spooking them, but it definitely affects them. I bet you don't know how this translates to fishing shallow huh? Well had there been a shallow retreat available instead of the mosquito infested salt grass prairie; that fish would have probably coasted in that direction and I might have caught it.

So I think Mike and Tricia are right when they suggest looking to shallow out-of-the-way places for fish that many only dream of catching. Its fun to seek out and discover new things - even when you're an old dog. I have always believed that the biggest trout come from shallow water but now I am coming to believe that maybe they never leave the skinny brine if they don't have to.

I would like to congratulate Capt. Tricia on being named to the Chris's Marine Haynie Boats/Mercury Pro Staff. Well deserved, and I know Chris and Julie are excited about having her on the team.