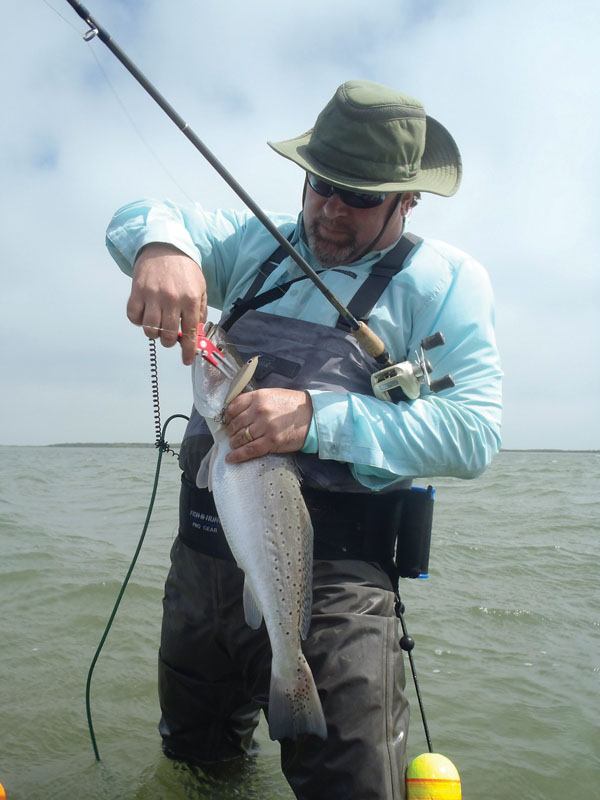 Weather patterns during late-April and thus far in May have been particularly unpredictable. Late-season fronts have been dropping water temperatures and tide levels and this seems to disturb the trout spawning activity as well as the migration of finger mullet and menhaden. I typically target concentrations of these important forage species, believing that trout follow them closely, especially during the spawning period.

Prior to the opening of Cedar Bayou I observed that spring bait migrations in Aransas Bay ran predominantly from south to north as mullet and menhaden entered the bay system through the Port Aransas jetties. This is not to say that some may not also head south but I have not witnessed it to be as prevalent. I have no science to support my theories, just many days on the water monitoring baitfish and gamefish movements.

Apart from the bait movements, another important reason for starting my spring season on the south end of the Aransas system and working progressively further north would be historic fishing pressure. In late-April and throughout May, weekdays are practically void of boats on the south end. However, as soon as school lets out, angling pressure increases dramatically on the south end and up north we have traditionally had lots of water to ourselves.

The new wrinkle, with Cedar Bayou open, an abundance of finger mullet and menhaden entering through this pass has opened up Mesquite, Cedar, Carlos and all points north of Ayre's Dugout to earlier arrival of forage species for spawning trout in these systems. I have most definitely seen an increase in the numbers and quality of trout we are catching in these areas since the bayou was opened.

With conditions changing back and forth with weather, our fish have been somewhat trickier to pattern. Water is still very clear due to 70 water temps, which are quite cool for the time of the year. Clear water often sends shallow-orientated predators into a pattern I refer to as deep and dark. Light penetration diminishes as depth increases and the water naturally becomes darker. This seems to cause a stacking effect along drop-offs where deeper-darker water lies adjacent to primary shallow-water feeding areas. I believe that trout are programmed by nature to stage in areas as close to their primary food source as possible to conserve energy.

On the opposite end of the spectrum we find fish living on large expanses of shallow flats exhibiting a totally different attitude. Many times the largest of trout go extremely shallow on virtually nothing but white sand. I find these fish to be the absolute hardest to catch on a daily basis. Getting close enough to get a cast to one is a challenge in itself. Taking all that I have mentioned so far into consideration, what's the game plan when patterns don't seem to be developing?

Now we're talking the brain game. My son Ryan was being interviewed recently in a tournament in which we finished second. That's first loser to those who believe winning is everything. Too many trophies and medals awarded nowadays simply for participating in my opinion, but of course this is a whole other issue. Conditions were less than favorable on the week prior to and also on the day of the tournament. Ryan jumped all over it and stated that on days such as this the tournament is not won with rod and reel alone but between the ears. What a profound statement and how true it was. He went on to explain that many anglers allow the conditions to get into their heads–too windy to fish windward shorelines, too cloudy to sight-cast, too windy to run schools–everybody forced to fish the same protected waters. We did not catch much while pre-fishing while some of the locals knew where good fish were holding prior to the bad weather moving in.

The brain game is often a dangerous thought process that convinces many they simply cannot compete. Always remember that a defeatist attitude more times than not produces defeat and through this 75% of the field will eliminate themselves before the game even begins. The mind game is the biggest of all the games.

Every year we encounter something new to take into consideration when trying to predict seasonal patterns and quite often this is the biggest challenge facing less-than-seasoned anglers. I cannot over-emphasize how important it is to maintain an accurate log and record each fishing trip as soon as you return. Tides, wind, water temps, water clarity, etc., the list is almost endless and writing it down while the details are fresh in your mind helps the learning process. Over the years, definite fishing patterns will emerge for each season but there will always be something changing weatherwise that requires that we rethink what we believe we already know. My daily commitment to myself and my clients is to continually compare and confirm (or question) that which we encounter on the water throughout the day.

Right now it's a mind game for all of us and, because it is a game, if we want to win we must play through the fourth quarter. I am paying close attention each day to the changes in conditions as they arise. I am continuously aware of solunar major and minor feeding periods as well as areas that have been consistently holding the right types of food for the species I am targeting. With trout, it's finger mullet and menhaden over submerged grass in slightly sandy to downright dirty water, preferably along windward shorelines and spoils islands. For reds its small shrimp and crabs and these too are commonly found along windward shorelines and spoils, but up shallower, where sand and grass meet the actual shoreline. The higher the tides the better the bite becomes in these areas for reds and remember that huge trout will sometimes slip in to eat their share of crabs.

Once an area has been located we often wait until the timing is right (solunar feeding periods) before entering and beginning to fish. This is the ultimate mind game and calls for supreme confidence in your game plan. My dad told me a few weeks before his passing to never worry about things I could not control. "Control the things you can," he said, "and react in a positive manner to those you cannot." Excellent advice for anglers fishing mind game conditions.