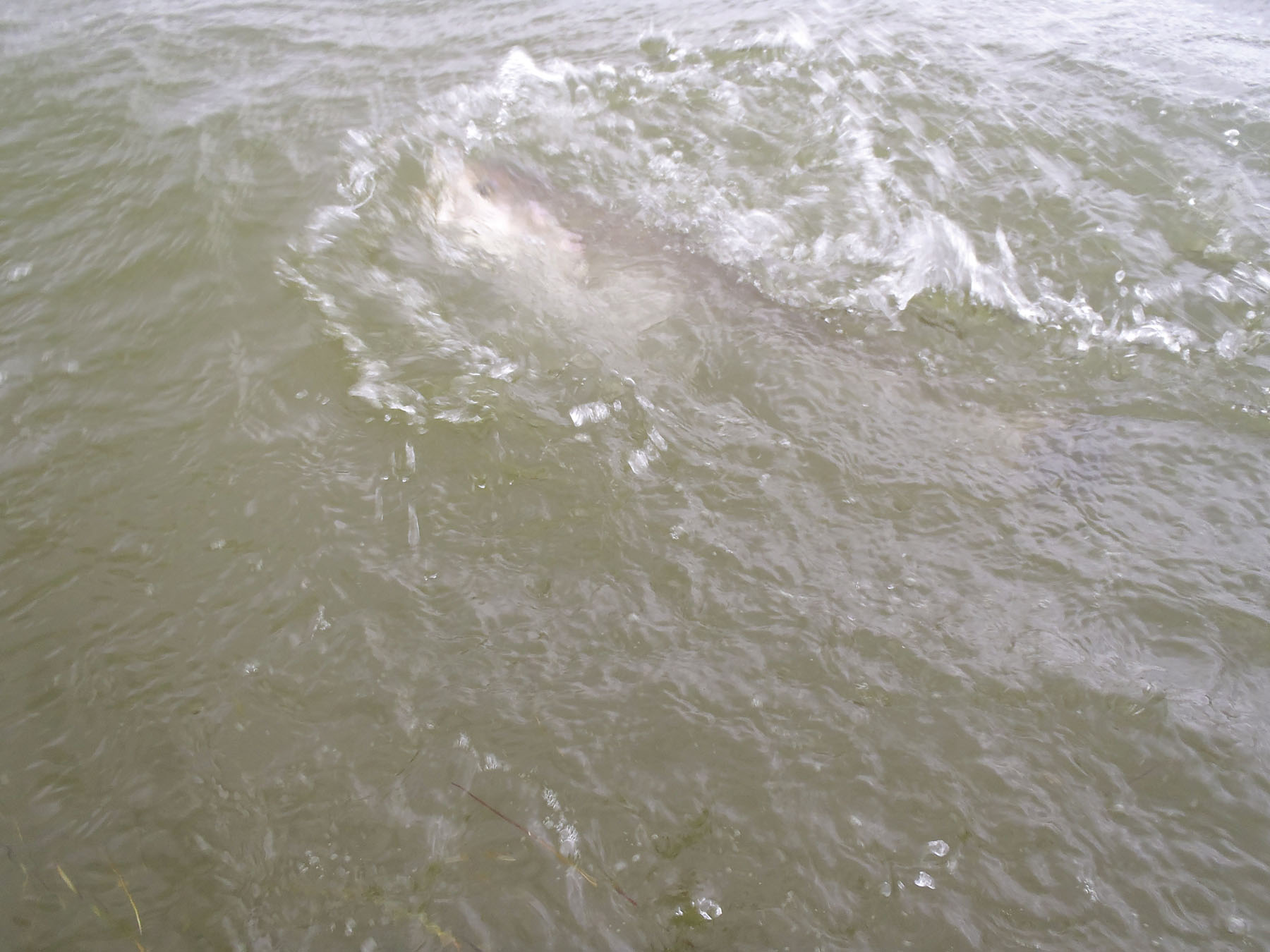 Beautiful big trout being played down for landing.
With the arrival of the New Year I cannot help but look back and marvel at how fast 2013 came and went. It was a tremendous year all around for me. Fishing was good throughout the four seasons and business due to the oil boom in Texas was as strong as ever for just about everyone. Oil people like to hunt and fish and that is certainly a benefit for me and Jay Ray.

We anxiously awaited the arrival of a Watkins granddaughter which came on January the 20th. Raylee Jay Watkins joined the family with all from both families present for the occasion. She is a real cutie and stole her daddy's heart the instant she arrived. Ryan's a man with a family now, so for me, life is coming full circle. Jay Ray hangs on with his longtime girlfriend, Morgan, but no mention of a date yet so we're still waiting on this one.

My winter fishing is in full swing. Colder than normal arctic air has caused water temperatures to fall below 50 for just about every week along the Middle and Lower Coasts. Winds have been extreme at times, forcing us to push back or cancel trips. I have fished at least four days when morning water temperatures dipped to the 45 mark, a little too cold in my opinion for trout to stay shallow for very long and this is certainly being reflected in our daily success. Trout feeds have developed during small windows of the day so being in the area holding trout when the time arrives is an absolute. Bait at times has been scarce so I have depended on help from above, mainly in the form of the osprey; I have certainly also asked the Big Guy for patience. Seldom ask for straight-up help though as he has bigger fish to fry. The osprey definitely knows where the baitfish are staging and seldom venture far from a reliable food source. Redfish have dominated the bite, cold does not seem to affect them as much as it does the trout. I am greatly thankful for them even though they are not the primary focus of my attention.

I am trying to concentrate my efforts on deeper sections of flats (swags or swales in the bay floor) as well as old oil field channels and shallow spoil banks along deeper channel walls. If any amount of bait at all is present I work the area. Points where two channels or areas of deeper water intersect can be excellent areas to target during midday warming trends. Abundant periods of sun are critical to allowing the trout the opportunity to pull up and warm up. Bottom in all of the above mentioned areas have strong tendencies to be softer than normal. This requires testing of the bottom BEFORE jumping overboard. At age 56 I can still wade the bog but I don't like to if I can avoid it.

Wading in stealth mode, once signs of trout are evident, is the single-most important aspect of catching trout under the current conditions. My "line-up "and slow movement across a depression in a large flat allows for the most effective method of finding winter trout. Over the past two weeks I have experienced very tough days but on the days when we finally located the trout they seem concentrated and are absolutely feeding during Solunar Major and Minor feeding periods. Never will it be more important to plan your fishing day in conjunction with the day's solunar feeding periods and an accurate local weather forecast. This magazine has a better than great solunar table that can be easily detached and carried with you. I totally depend on mine each month.

I have noticed that many of the trout we are catching have absolutely nothing in their stomachs. This is a sign of severe cold, cold that slows down their body metabolism and places the fish in an almost dormant state. Longer periods of warming will be required before we see consistent winter feeding patterns. This is ONLY my opinion and based ONLY on my results thus far in 2014. I have caught several really great fish, one over 33 inches that touched the 10 pound mark along with a beautiful 8 pound fish. Both came during periods of prolonged warming trends. Problem has been that few of these fish are being encountered. Both were quickly weighed and released to fight another day. Please release all of the trout over 25-inches. I have always believed that they continue to be the carriers of superior genetics.

Both Bass Assassins and the MirrOlure "Paul Brown" Corky are my current go-to lures. Topwaters have been almost totally ineffective for me to date. Darker color patterns are still the ticket in the murky waters of Port Mansfield and clear-bodied baits in my home waters around Rockport. The water here in Mansfield has the look of brown tide but no official word from TP&W yet on exactly what type of algal bloom we are seeing. Whatever it might be, brown tide or otherwise, the effect seems to be most predominant from the southern end of the Land Cut all the way south to near South Padre, according to reports.

I remain confident that as winter eventually loosens its icy grip our trout bite will become more predictable. Not every season will yield the best the pasture has to offer. True hunters stay the course and take advantage of the small windows for success. I'm still hunting.