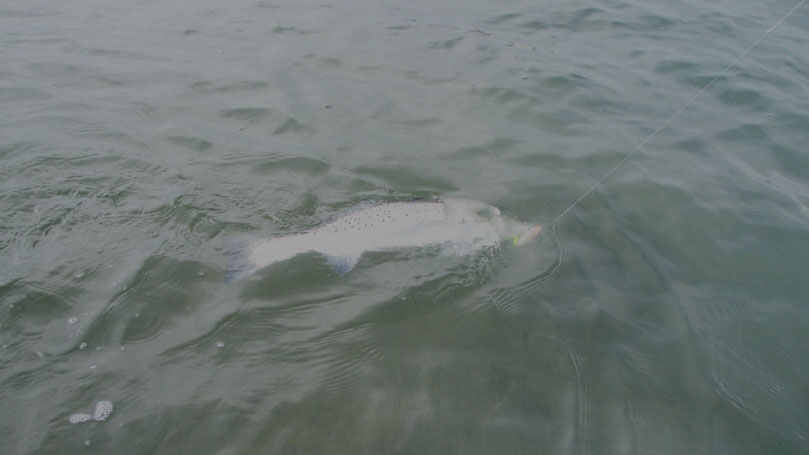 Note the clear water, the cold and lack of wind can create gin clear water this time of year.
I have a lot of people that seem to be confused when I start talking about how fish position themselves into the wind or current during feeding periods. Fishing at angles to the wind and up-current causes some confusion to those that fail to see the underwater picture. If you're a loyal reader of this magazine you have read some articles addressing this issue. The reason for tackling this issue again is some recent fishing patterns that have shown this tactic to be particularly effective.

I have often used this tactic while drifting the flats on windy days for redfish. Over the years I have found it to be extremely effective. The same tactics work while wading, whether it is trout or reds you're targeting. If the fish we are trying to catch are facing into the wind/current as we work the chosen area for the day, we as anglers have the tendency to start upwind and fish with the wind at our backs. It is safe to assume that many of us do this and catch fish but by adding some angles to our cast we can actually use the wind or current to add a more realistic presentation.

Game fish do not expect the baitfish to swim up from behind them, it's just not realistic. Fish not in a feeding frenzy will not often give us that predator instinct bite. By casting at angles to the wind we allow the lure to cross in front of the predators, which is more realistic scenario. This fishing tactic works especially well with lures that have actions that can be caused by simply falling or moving through the water column; examples are the 51 and 52 Mirrolures, the Catch-5, Catch 2000 Jr., the Corky family, spoons, and even topwaters.

I am especially fond of the Catch-5 and the Paul Brown Corky during the coldest of times. February tends to be our coldest month along the middle Texas coast. As of this writing my water temperature in Rockport is 47 degrees, downright cold on the feet and hands. February is also our best opportunity to catch that trout of a lifetime.

The remainder of this article is dedicated to trying to explain what we have happening in our bays system right now and what we are doing to capitalize on the fish we know are present. Again with the Majek Illusion, I can see the bait and the trout that are living in the areas we are fishing.

I find that working my lure at angles to the wind has the greatest success when working water 2 to 5 feet in depth. At this time of year we need to fish areas with bottom structure that contains a mix of scattered shell, grass and softer bottom. Just a thin layer of silt or mud darkens the bottom and helps retain some much needed heat during the coldest of times.

Yesterday I had my guys watch as I released a 4-pound fish over this type of bottom. The point to the release was to show them how quickly the fish would blend into the spotted bottom. Due to the structure being scattered, the fish depend on wind mostly this time of year for positioning. This is where the casting angle starts to pay big dividends.

Many believe that the slack in the line that is created by the wind is detrimental to their production; actually it's just the opposite. The slack in the line creates a belly and the wind catches that belly and literally drags the bait forward. By lightly twitching and taking up the slack the lure swims and wobbles slowly in and out of the scattered bottom structure.

On overcast days, while fishing clear water, you can actually see the silver flash as the trout takes the bait. It is not true that you can not feel the strike when you have this belly in your line. Think about it, the belly is being created by the angle and the wind, the line is still fairly tight so feeling the strike is easy.

I honestly believe that the slow wobble that the wind gives the bait as it pushes it downwind is very realistic. The main thing however is the positioning of the bait. By casting at angles, the bait effectively comes in front of more fish than it would have we'd been throwing directly downwind. We are also putting the bait out in front of the feeding fish, exactly where they believe it should be.

By trying to create more natural presentations, we create more bites and more bites mean more fish. On several occasion the past two weeks I have seen this tactic work to near perfection. On one particular day we had pushed through the fish trying to force feed them. After missing a good fish, I had my client redirect his casts farther upwind. I did the same and within a few casts we both stuck a solid fish. Working downwind, the fish had let us work through them without a sniff because the bait was not being presented naturally. Just a little upwind and a few light twitches and cranks on the reel handle was all it took to get us on a pattern that turned the day into one of the best of the month.

This same tactic will work down south along the King Ranch shoreline. Down there you find large masses of floating grass that have basically formed small floating islands. Try casting upwind and allowing the lure to be blown down under the edges of the grass mats. The trout will lay on the upwind points of these grass mats waiting for bait to come out of the mats or enter them. The grass mat is sort of like a wall of grass in the flat, which is what makes them so productive. Place one in an area of scattered potholes and watch out.

This tactic works just as well out of the boat when drifting flats for redfish with spoons and trout with top waters. For most of my guiding years I have fished from the back of the boat while my clients occupied the roomier front end. I like to produce a little wind tack by leaving just a small portion of the prop in the water and turning the engine into the wind. This makes the boat, even with drift chute deployed, tack slightly into the wind.

Again, by casting across and slightly upwind and allowing a belly to form in the line, I can slowly swim the bait out in front of the feeding fish instead of bringing the bait up from behind them. This has been a killer tactic for me during redfish tournaments that require us to stay in the boat. On large expanses of flats in higher than normal winds, this tactic is absolutely deadly. I have seen the redfish pull up behind the spoon and turn downwind and eat the bait.

Remember the fish may turn and follow the lure downwind for a few feet before striking. After the take the fish will follow through the strike, creating some slack. It is important to get the slack out before trying to stick the hook. This is especially true when drifting under windy conditions. This is easier said than done but it is a "must learn" if you are going to fish in this manner. The next time you're on the water and not having much luck on your favorite downwind wade, toss a lure into the wind and see what happens.