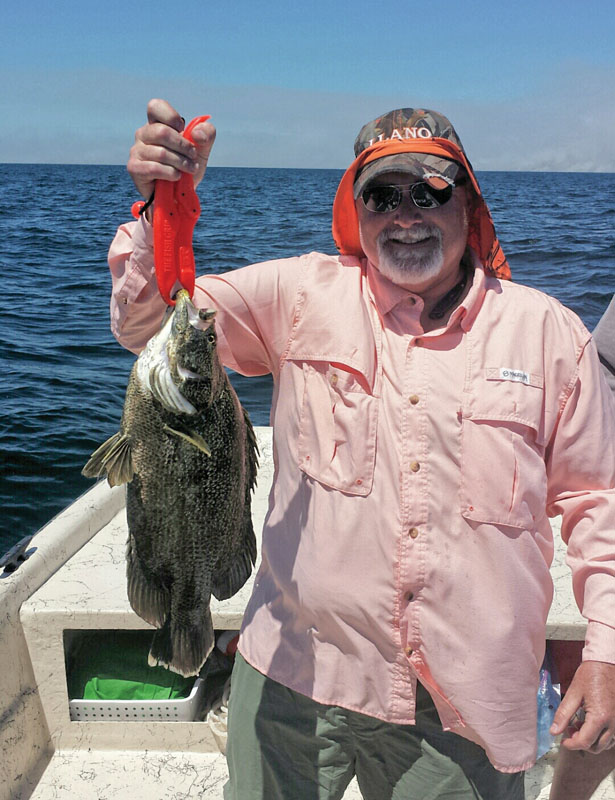 James White landed this nice early-season tripletail. Look for them arriving inshore around jetties and Gulf passes this month.

Discussions of the current El Niño and a possible La Niña weather event have been all the rage the last twelve months. Rightly so, considering that the El Niño Southern Oscillation (ENSO) greatly alters the weather patterns experienced worldwide and along the Gulf coast. There are typically three phases involved in the ENSO phenomenon. They begin with El Niño's gradual warming of waters in the Equatorial Pacific, which eventually slows into a second phase known as a neutral state, followed by the opposite forces of La Niña.

The significant rains last spring could be attributed to the winding-up effect of the Pacific currents at the beginning of the ENSO. The freshwater influx into the bays were a welcomed boon on the mid-coast as salinity returned to more favorable estuarine levels and our bays came alive.

The mild winter and comfortable spring temperatures we have experienced are the effects of the ENSO winding-down. The El Niño should become noticeably weaker, perhaps dormant by early summer. It's this neutral state before a La Niña event that I'm most excited about. If all goes well we might experience a calmer summer season for fishing.

During our most recent neutral state of the ENSO phases the weather and catching was phenomenal. Starting around Memorial Day last year we experienced a good push of clean, warm water from the Gulf of Mexico and favorable weather patterns that continued through summer.

Calm conditions got our fishing off to a good start by bringing with it a number of migratory species. The clean water held kingfish, Spanish mackerel, and little tunny in less than 40-feet of water until fall. The cobia also pushed in closer to the beach which allowed for more opportunity. They often worked the color changes, along jetty rocks, and tagged along with large turtles and manta rays near the beach.

Throughout summer we had calmer days to get outside the bay more often. Running the surf chasing trout and/or fishing the jetties or nearshore structure was the norm. We even caught schoolie dorado several times less than a mile from the beach and hooked sailfish within sight of the dunes. Consistently calmer conditions make for more opportunity no matter how you fish, the methods you might be able to employ, and the species you might encounter.

Contrary to popular belief, live croakers are much more than a silver bullet for catching speckled trout. They are equally coveted by cobia, kingfish and tarpon that will devour them with enthusiasm. Both flounder and redfish have a hard time keeping their mouths shut and you may even catch black drum on them. The month of May is when catching with this bait really picks up. Croakers are extremely effective, user-friendly and, what's not to like about that hard thump when a fish crushes them?

To be most successful when using this bait it takes more than simply lobbing it out and leaving it to rest. I see this all the time, three fisherman onboard using identical rigs yet only one of them hooks up consistently. With all things considered equally, luck plays but a small factor in consistent catching. Favorable results are realized most often when effort and skill are added to the mix. It is no doubt the combination of longer casts, well-placed baits, attentiveness, proper twitching motion and a good hook-setting technique that puts fish in the box.

Many bait docks on the mid-coast have been carrying them over the winter. I've used them on a couple of times on charters but we caught trout 4:1 on live shrimp or soft plastics in the same area. That significantly proves they are not the evil end-all for the trout population, or does it? Depending on the seasonal conditions, certain fish rely heavily upon one food source or another for reasons unknown to me.

The croakers I have netted and purchased from bait docks lately are of decent size. A warmer winter season may attribute to the above-average size for this time of the year. Last year in May and again in the fall months we caught the greatest numbers of quality-size croakers on hook and line I can remember. I believe that trawling for them has decreased over the last couple of summers, possibly allowing them to make a comeback.

My most productive methods to fish live croaker is to free-line the bait with little or no additional weight. Casting perpendicular to a drop off, parallel on a shoreline gut, or tossing onto sand pockets all work great. Methods and locations may change but one thing is certain, these barking monkeys like to seek refuge. They will find structure to hide within: grass beds, clump oyster and also abandoned crab traps.

Getting your bait into the strike zone and keeping it from fouling on structure can present certain challenges. I often use a Chatter Weight rattle tube to assist with longer casts while adding fish attracting noises. Rigged inline, approximately 20 inches ahead of the hook, with 20- to 30-pound Seaguar fluorocarbon leader works well. My favorite is the Mini-Chatter Weight from Texas Rattlin' Rig. This 1/10 ounce rattlesnake-sounding fish attractor weighs about the same as a #5 split shot.

Other than the obvious rattle, the Chatter Weight sinks up to 10-times slower than traditional lead, given the natural buoyancy of the plastic and air inside. This slow-sink ability encourages the bait to wriggle and pull harder while headed toward bottom. The internal beads resonate with each tug from the bait. The addition of weight of the device to the terminal rigging, in general, and the fact that it "catches" a following breeze, enables greater casting distance.

I normally attach a size #6 SPRO-Brand Power Swivel via a #2 Spro split ring to the Chatter Weight. The smooth rotation of the swivel allows for increased action from the live bait with less chance of tangles around the fishing line. Positioning the swivel on the rattle tube toward the hook keeps line twist to a minimum.

Chatter Weights come in larger sizes and several colors, some with prismatic tape for added attraction. I like to use the silver or gold color in clear water and chartreuse or red in stained water. Of limited consequence, the only real drawback I've encountered while fishing Chatter Weights is that fish occasionally try to eat the rattle. When fishing near the jetties or in the surf I like to use the natural-tan colors (non-reflective) to reduce attacks from ladyfish, bluefish and Spanish mackerel.