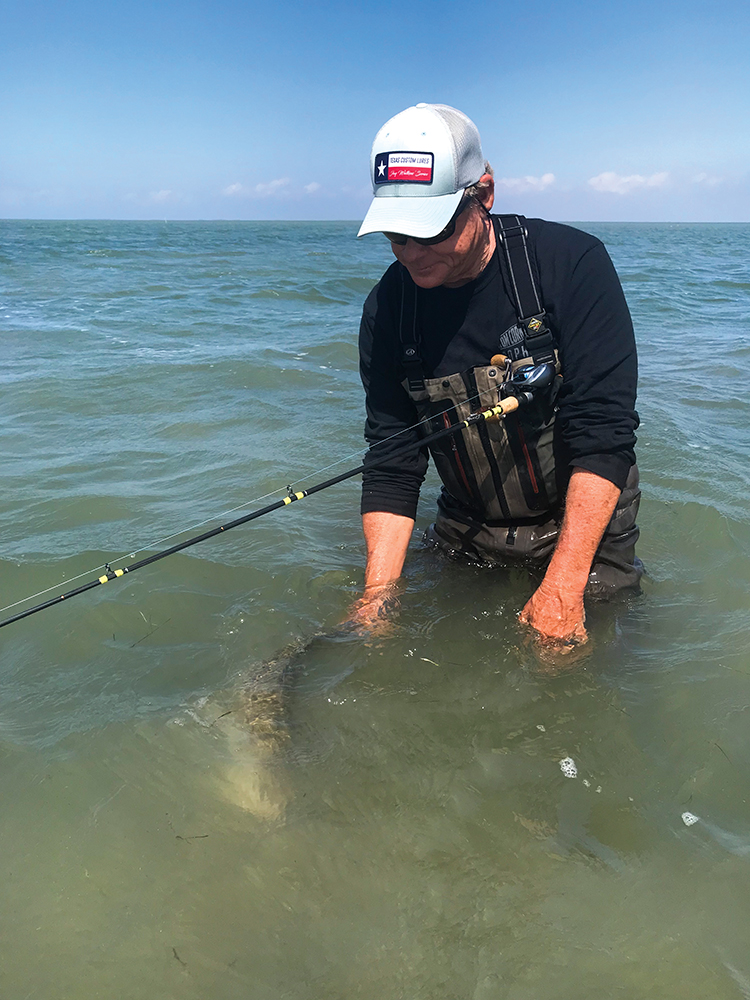 Jay releasing a solid trout to continue her spawning chores.

Water temperature two days prior to writing this was 77°, then another cold front dropped the air temperatures into the mid-50s. Wet wading one day and back in my Simms waders the next. Today, putting the finishing touches on this article, we have another front pushing into the Coastal Bend, bringing cooler temperatures and hopefully some much-needed rain. I think I’ll just store my waders in the truck for a few more weeks to be safe.

Fishing a little over two months since the freeze, I have discovered that my suspicions were correct. Right after the ’89 freeze we caught decent numbers of trout for a few weeks. I believe when fish become stressed they school tightly and stay in small areas until conditions stabilize, usually in deeper, warmer havens. As a young angler I learned where these deep water areas were and what conditions would push fish into them. These things have not changed; in fact, we have even more areas today that qualify, due to development of the coastline along the ICW south of Rockport.

When the temperatures began to rise following the February freeze, the fish in these deeper areas began moving toward nearby faster-warming flats. The flats have areas of slightly deeper water as well, and these became stopovers for fish returning to their normal haunts. We caught decent numbers of good trout for almost a week. I kept telling myself that as the warming trend continued and springtime tides started to run, the fish that made it through the freeze would begin to scatter, the same way they did in ‘89. We were still able to find a few trout but the fish were definitely not everywhere that one would expect them to be.

I have a pretty good nose for trout and find myself stopping and looking at likely areas that I am not totally sure about. Many times as I ease along they show me small signs of their presence, trout sign language you might say. Never will it be more important than now for anglers to be in total tune with all the signs fish can show us. Over the past two weeks, areas that were holding some decent numbers of trout are now producing only a few bites per wade, although the trout we are finding are very nice fish on average. Most are solid spawners in the 20- to 23-inch class, so we really need to return these fish to the water. Okay, enough on what’s been taking place, let’s talk about how you’re going to find and catch them going forward.

My video this month speaks to focusing on small areas of structure along windward shorelines. These are areas that will attract spawning-age fish during the next full moon phase. Most clients that fish often with me know that I am a believer in shallow grassbeds and shoreline guts for finding and catching the best trout the bay can offer. Gamefish need at least three things to hold them in a given area – food, cover and safe access routes to and from that preferred feeding area. Our barrier island and spoil island shorelines are loaded with areas that can fulfill these basic needs.

Bottom contours and submerged grass are always changing, so we have to be tuned in on what is below the surface at all times. My feet have been my eyes in this regard from day one, and I can associate the slightest changes in water color with water depth. Water color can also be associated with the composition of the bottom. I know it’s crazy to think of it this way but it’s a fact, and this knowledge has been the foundation of my confidence and successes over the years. The greatest benefit from this knowledge is that it allows me to fish confidently in bay systems that I am not very familiar with. Trout water is trout water, no matter where you find it.

Right now I am focusing on what I call small washouts along shorelines. Hurricane Harvey drastically changed the bottom contours in all our area bays. The force of the storm currents cut into the shorelines, creating many small passes and washouts. In many areas the washouts have a U shape and reach almost to the shoreline itself. Grass is now growing along the edges of the washouts where shallow sandbars have formed. Some of the washouts were cut in areas where scattered shell was present, creating shallow edges of shell, grass, and a gradual sandy drop-off. These areas are tremendous pieces of structure and many are quite small.

Smaller areas tend to concentrate baitfish and that in turn attracts predators. Small also provides the opportunity for quicker evaluation on our part. Smaller also allows larger, more dominate predator fish the ownership of the structure. My observations over the years suggest that loner fish are harder to entice than those traveling or resting with others. I have observed this so many times when sight-casting to larger trout. Add another fish or two and your odds go way up, one simply eats to keep the other from eating.

In springtime, when we start seeing increased slicking from trout along the barrier islands, a single small slick in shallow water tells me it was made by a single fish. It therefore stands to reason that if the fish are scattered and traveling solo, bites might be hard to come by. The key here is locating the origin of the slicks. Discount the fact that you’re not getting bites and concentrate on the fact that you’re in the right zip code.

Prior to the last cool down we had water temperatures in the upper 70s and pre-spawn activity as well as shallow slicking was being observed. An 8° drop in water temperature, courtesy of an unseasonably cold front passing through brought this activity to an abrupt halt. This led to several tough days, days with little evidence that fish were present, ideal conditions for deploying aim small miss small tactics.

Small areas can be fished thoroughly in a rather short time. No bites after a brief but thorough effort tells us to move to the next small area.

Just so you know, I try to search out areas that supply my clients with multiple areas of smaller structure for each wading session. The slow deliberate grind is a hard sell when bites are few and far between. Many still have the belief that the more water you cover the better one’s odds will be, but I do not share that belief. Instead, I teach choosing the right water and fishing it thoroughly before moving on.

Location is always a key ingredient but we all know there are no secrets out there anymore. With that said, it comes down to the individual angler and their ability to capitalize on all that each area has to offer. My confidence in this style of fishing speaks volumes through success. Both my boys acquired this same skill early in their fishing careers. We fished tournaments together and instead of running all day or chasing fishing reports, we picked areas that held the right stuff, for lack of a better word. We got out and we stayed there if all the right stuff was present. Throughout the day we were able to observe how fish moved in and out of the structure we had chosen. We allowed the pattern to develop as we fished and we learned from each and every event. In areas where we seldom fished, our lack of knowledge actually aided in our success, because… trout water is trout water, no matter where you find it.

The MirrOlure Lil John XLs and 5-inch Provokers, along with 5-inch Bass Assassins, have been getting lots of playing time lately. I rig these on 1/16 ounce Texas Customs 2/0 screw-lock jigheads. This jighead really comes into its own as water temperatures rise and grass begins to float. The shape of the lead and the way it extends right up to the eyelet definitely helps shed floating grass and allows the lure to swim and dart more naturally. I round out my lure selection with the Texas Customs Double D Series for the way I can work across submerged grass and shell without hanging up.

In the coming months we will need to fish smarter versus just going fishing, if catching is to be a priority. I always enjoy being out there no matter the outcome, but I still fish for that bend in the rod and the rattling of gills as much as I ever did. I guess I’ll really never learn how to just go fishing.

Please try to release all the fish you do not need for dinner. Putting the fish first will result in a faster recovery from the freeze.