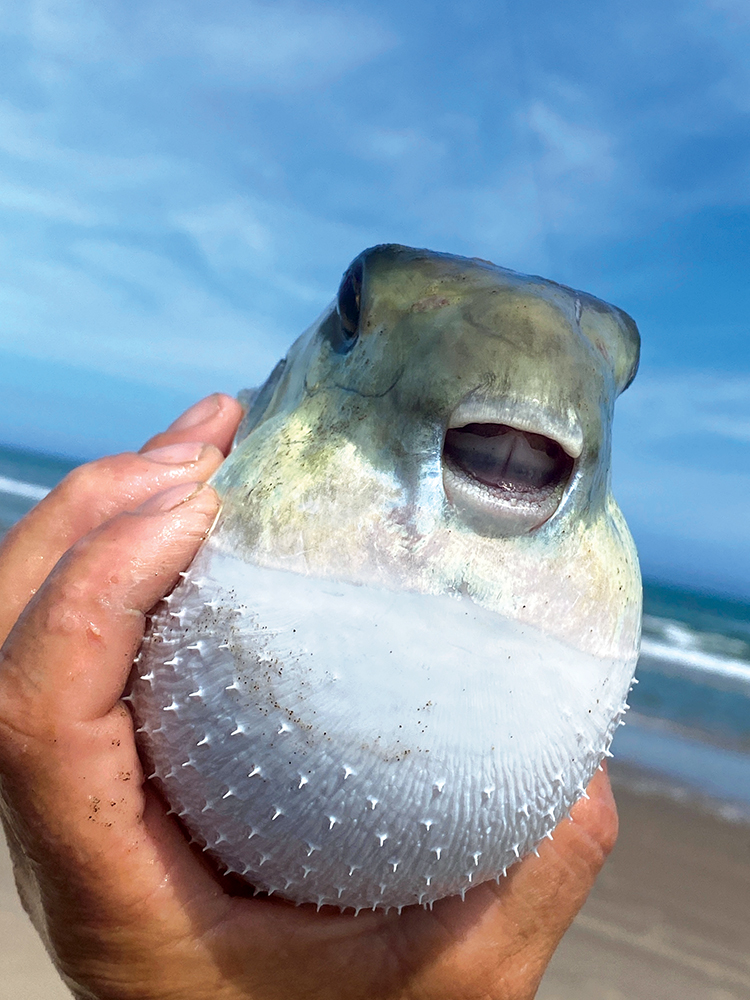 Once a rarity in the surf, beach anglers have encountered exceptional numbers of smooth puffers this year.

The past twelve months have dealt anglers on the Texas coast a difficult hand of cards to play.  Nearly a year ago, we endured one of the harshest freeze events in decades.  This changed the current landscape of our fishery.  We lost great numbers of some revered sportfish in our bays, making it more difficult for folks to catch their favorite fish.

Perhaps as importantly, we also lost untold numbers of forage fish, species preyed upon by the predators we usually target.  In particular, mullet of medium size took a big hit.  The lingering cold pushed the timing of some migration events back some, and others never materialized at all.  For instance, we never really had what anyone with ample experience would call a run of jack crevalle in the surf.

When summer arrived, things seemed to have turned a corner at the beach, and productive days seemed imminent.  The trout bite kicked off in earnest.  Other species came to the sand on the ends of the lines of anglers working the beaches.  However, the summer shark fishing started off a bit slower than normal.  By August and September, during the peak of monster tiger season, things really got weird.

Tiger sharks did still rule as kings of the beach in 2021.  I put nine on the beach during the summer, including four in one charter.  Sadly, catching species like scalloped and great hammerheads, lemons and giant bulls proved much more difficult than in recent years.  It's really hard to say what caused this; we'll never know.  As the end of the summer tiger season approached, we began to have major issues.

On a regular basis, soon after we deployed them, large baits were obliterated, stripped to bone and cartilage, usually within an hour or so.  Smaller shark baits fared even worse, disappearing in mere minutes on many occasions, and the culprits wreaking havoc were NOT sharks.  The baits came in with numerous small, diamond-shaped chunks removed from them.  In some cases, the number of chunks became enough to completely strip the top layer of a stingray wing down to bare cartilage.

Many who observed this blamed turtles for the mayhem.  Certainly, turtles do take diamond-shaped bites out of big baits from time to time.  This year, though, the widespread regularity of the phenomenon indicated some other species as the cause.  We simply don't have enough turtles swimming in the surf zone to cause such a ruckus.

When I placed a miniature underwater camera on one of my leaders, I was able to reveal the identities of the marauding bait thieves.  Initially, I intended to capture underwater footage of sharks taking my baits, to see how they picked up and handled them before becoming hooked.  Such information, I believed, might prove valuable to all of us who love shark fishing.

Accidentally, I observed something mind-blowing.  The camera clearly did not show turtles feasting on our baits.  Nor did it digitally capture hordes of hungry crabs fighting over the hunks of meat.  To my astonishment, the lens exposed puffer fish as the animals with appetites for our destruction.

The smooth puffer fish, Lagocephalus laevigatus, also known as rabbit fish, has been encountered in our waters somewhat sporadically in years past, their numbers remaining minimal until recently.  In fact, I fished for many years in the surf before I caught my first one, though I had caught some offshore, along the continental shelf, in deep water.  The state record specimen was caught offshore by someone fishing at night, likely for tuna.

I did catch one from a kayak while targeting snapper on a reef, but I had heard of only a few random specimens caught by people on the beach.  I remember seeing pictures of some of these and noting their rarity.  Things almost reached a point where I felt jealousy, since I had never caught one in the surf. Those feelings have long since disappeared, after the raids we experienced late this summer.  In the second half of this year, the puffer fish became anything but a rarity.

I'd describe their appearance as an invasion, honestly.   The prying “beaks” of puffer fish look menacing and work like charms to destroy shark baits.  By October, the actions of these pests ran completely out of control.  For the best part of two months, deploying shark baits on the beachfronts of South Texas became virtually impossible; they lasted mere minutes after hitting the bottom.

The abundant puffers would fight over the baits, likely because they had little else to target in what seemed like a barren desert waterland.  Unfortunately, warm weather lingered into late-November, with water temperatures repeatedly rising into the upper-70s.  With the tepid water, some big sharks still swam around within our reach, but we couldn't keep baits out long enough to attract their attention.

On a positive note, my good friend Ron Richmond escaped punishment from the puffers on the Upper Coast and was rewarded with an incredible 12'6" tiger.   No way he could have landed such a fish this year south of Port Aransas.  The puffers doomed the hopes of anglers fishing Padre Island throughout the season.

With big bait shark fishing rendered basically futile, we did find some glimmers of hope with another species.  Florida pompano, arguably the most highly desired species for table fare on the Texas coast, showed up in November in numbers we haven't often seen.  Using the Catchsharks.com Coquina Sunrise pomp leaders, we caught our share and more of the tasty fish, at least for a while.

But the pesky by-catch kept roaming shallower and shallower, to the point where the puffers outnumbered the pompano.  When the ratio of caught puffers to pomps reached four to one, we knew we had a real problem.  Normally, medium-sized puffers in the two to four pound range feed well offshore.  This year, they ventured closer and closer to the beach, eventually discovering our shrimp and Fish-bites, intended for the pomps.  By the end of the year, these relentless trouble makers had covered all the depths and seriously hampered many of our efforts.

We can only hope the coming cold months with push them back into the depths.  In a year in which one winter ended with a furious freeze and the beginning of the next became delayed by a lingering Indian summer, the challenges to anglers trying to take advantage of the bounty usually found in the waters along Texas beachfronts became many.  The smooth puffers provided a truly menacing presence, and they apparently have little value to us, as food fish.  I've learned they can be eaten, if properly handled and cleaned, something I really can't advise people to try on their own.  Here's to the hope of a return to more normal things in 2022, with plenty of trout, Spanish macks, jacks, sharks and pomps biting our baits and filling our stringers and hearts to the brim.