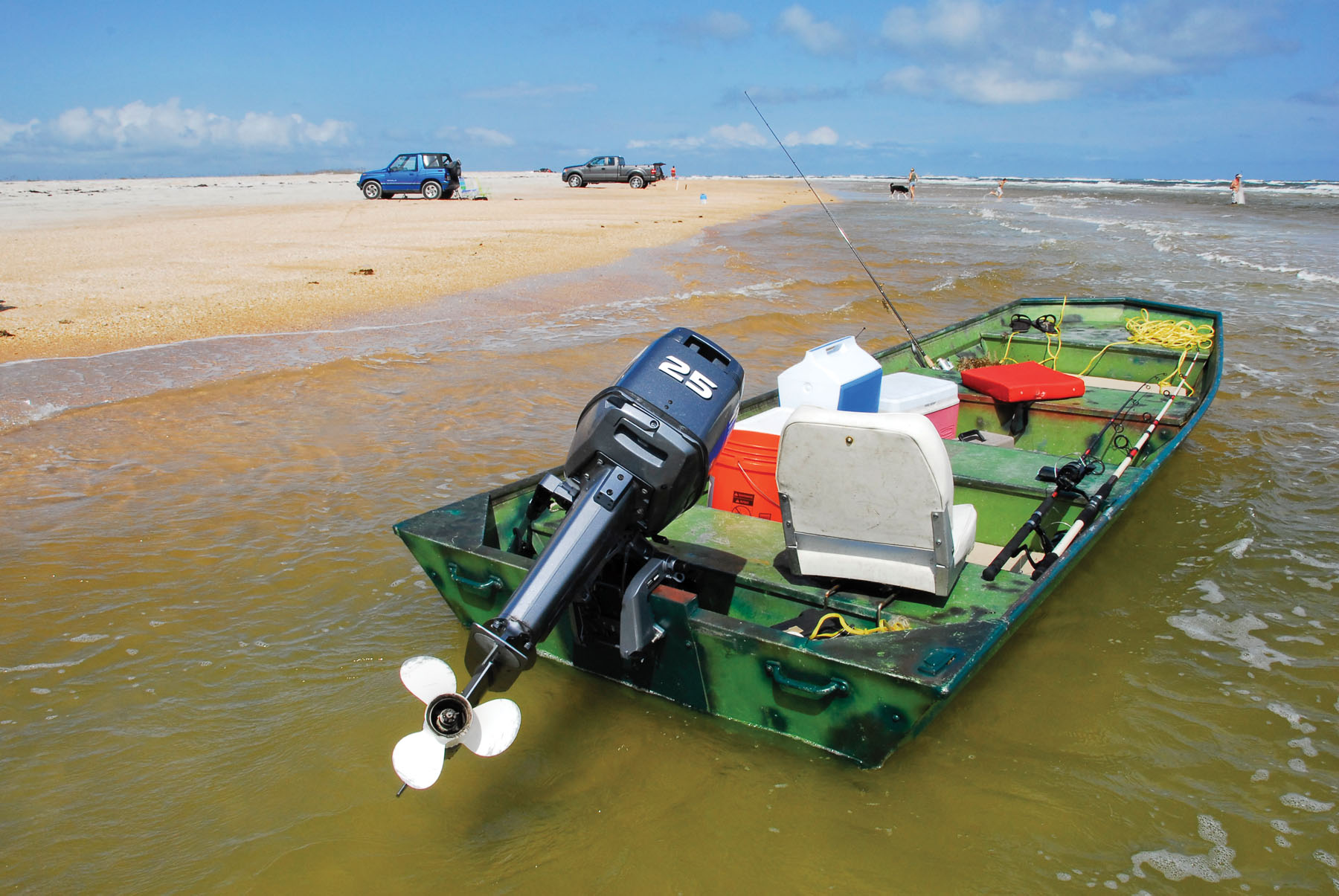 Jonboats easily run the surf on reasonable days, can float in inches of water while the crew wade-fished or waits for the truck and trailer. In a pinch, just run the boat up on the beach.

Lately I've heard angler commentary on getting out of boating, because owning a boat is no longer affordable in this economy. They're selling the rig, dropping out and turning on to wade fishing instead, from the nearest beach or road. Or worse, giving up entirely. That's a head-scratcher for me, but then I was raised within sight of Louisiana, where running cheaper johnboats is a way of life. With even a small tin boat, you can fish countless places beyond reach of shore-bound anglers, and without paddling grimly through afternoon chops in a soggy kayak.

I go back to 1968 with tin boats in salt water, and still have one in the back yard today. At a tender age, my folks turned me loose on Sabine Lake, mostly alone in the family flat-bottom, as they called it. With that small craft, I learned weather and tides the hard way. Sudden storm? Figure it out.

You quickly realize that wind is the enemy of tin boats. If you live way down in South Texas and fish the Laguna Madre where the wind blows almost every afternoon, aluminum might be a bad choice, especially in 20-knot gusts far downwind from a marina. Though heck, from Jims Pier Marina you could still make local trout drifts on calm mornings, troll the nearby jetties for tarpon, explore South Bay, and cast for snook in the Brownsville Ship Channel.

If you live further north where shorelines run in multiple directions or hold protective marsh, and study the wind, weather and favorable boat ramps, and know the safest routes back, you can venture far from the crowds. How far? Enough to make people wince:

>We often fished offshore with these boats, trout-fishing platforms in 25-30 feet and climbing them if a summer storm arrived. And kept right on fishing.

>Fished the rigs in 100-foot depths off Mansfield and caught a boxful of amberjack, riding the August afternoon breeze back, cleaning them in front of amused guests at the Redfish Motel, who doubtless had never seen a jonboat with a 9.8 Mercury unloading AJs.

>We often launched in flat High Island surf for summer tarpon, also catching big ling 10 miles off there and Sabine.

>Fished Sabine's inaccessible jetties for 15 years or so. If you bumped a jetty rock, the tin boat didn't care. On our first venture to the Galveston jetties, we actually pulled my boat up on the north rocks, so we could walk around and cast though that isn't recommended for aluminum longevity. What can I say, we were so young, The Who repeatedly sang Tommy on A.M. radio that day.

Too many years have come and gone, but my white-headed buddies (if they have hair) still have johnboats with their favorite 25-horse, two-stroke Mercury outboards, that cut so easily through marsh vegetation during our duck hunting heyday. Several of us now run 25 Yamahas as well, that can cover many miles of bay. But then, any small motor will push a tin boat a fair distance.

Jonboats have always been popular, but with today's leaner times, they're even more so. Boat sales may be slow, but in some parts of the country, aluminum is now neck-and-neck with fiberglass boat sales. Why? Fiberglass can't compete with aluminum in the expense column. Weight is another factor: My 15-footer is towed behind a little Nissan truck that gets 30 miles to the gallon, while towing. I stay off the Interstate, of course. On a typical boat day, running to my current honeyhole about six miles across the bay, I'm using 2.5 gallons of gas. Oil mixture for my 25 Yamaha is 100-1, so my daily outboard oil consumption wouldn't fill a chicken egg.

Trailer, tow vehicle and motors aside (you could rate them all as small), what sort of boat are we looking at, and can it be rigged to fish saltwater?

Standard length for Jon boats for many years was 14 feet. Today many are built much bigger, with higher-gauge aluminum. Anyone touring the New Orleans boat show would see all sorts of johnboat designs and sizes. You will also see a few small 10- and 12-footers around, but anything under 14 feet on the coast is probably too small.

After owning many fiberglass boats, I've scaled back to a wide, 15-foot jonboat that runs like a spotted ape. It has more than 20 years on it and will someday be replaced with a heavier-gauge, welded model of 16 feet. I launch it and run off across the bay for a day of fishing, past fiberglass rigs at the boat ramp, whose price tags runs way into five figures.

If you have access to a jonboat and motor, consider a few amenities before spending a day on salt water:

Electric motors bolt on at the stern where the driver spends most of his time, moving the boat short distances if wind and current aren't strong. If you have a bigger jonboat, you'll need a bigger electric, bolted on the bow instead of the stern.

A wood or aluminum push-pole about 12 feet long will shove your boat past rocks, oysters and sand, without risking a propeller. If using a 12-foot wooden dowel (compliments of Lowes), bolt a couple of wood scraps to the muddy end, for more gripping power on soft bottom.

If you're 40 and over, that lower back can stiffen up by day's end. (Try 50 and older). Attach boat seats where they balance the boat during running speed, and the driver has a clear view of the water ahead. In a pinch, we've used canvas chairs for guests, though they tend to sag in the middle, making it difficult to cast. A throwable flotation device is required on every boat, and I always carry one or two for guests to sit on or use as pillows during power-naps.

A fold-down Bimini top is nice when you need it, keeping out sun and rain. However, it's often in the way when folded down on the gunnel and hard to fish around. A beach umbrella works, so the wife can stay under it during mid-day. Since our PVC rod holders point out towards the water, I attached a small holder dead center on the middle seat, where the umbrella throws maximum shade. The back of the boat is still out in the weather, where someone can sit and fish several rods. The umbrella has a lower setting for windy rain, and an extender for tall shade.

Set up all your rod holders on one side of the boat, and another boat may block them off, the wind may shift or the tide change. My boat still has four primary rod holders on the starboard side, ready to deliver a broadside of baits, but with two more on the port side. And it works: when conditions are right and I'm first to reach the honeyhole, well anchor and fire off four rods, exactly where we want a spread of baits. Using circle hooks, you can take your sweet time about grabbing a bent rod; the fish will already be hooked.

We've always protected our thin aluminum decks with 1/2 inch plywood deck boards. Cut them to fit, and double coat with a light beige paint that won't soak up the sun and burn your feet. Or blind you in the glare. If a 300-pound guy walks around in your boat, maybe it won't spring the rivetsor welding, for that matter. Be sure not to use pressure-treated plywood, which contains copper. Why? Copper and aluminum together cause electrolysis, which eats through aluminum. And don't lose pennies under the boards.

If you can find a jonboat with hollow-seat storage, that's a big plus. There's nothing like clutter in the boat to complicate the day. I prefer lots of gear, which allows for more comfort and fishing options. Mine has a hollow seat that holds life jackets, gas tank, paddle, rope, anchor, motor oil, a few small tools and a small fire extinguisher, the latter required when your gas tank is enclosed.

Portable navigation lights attach to the boat's bow and stern and can be removed for simple day trips. They run on flashlight batteries, of course. You'll need them for night missions, such as flounder gigging or returning from a sunset tarpon trip. Keep a strong flashlight in the boat; you never know if you'll be kept out after dark by a big tarpon.

If stealth is required, such as in shallow-water situations on saltwater flats, keep a small anchor at the stern. Why the stern? The driver can ease it overboard without getting up or making noise. You won't need a noisy chain for very shallow water, unless the wind is howling; though you should keep three or four feet of chain in the storage seat for other situations. A jonboat anchored by the stern is far quieter, since even small waves will slap-slap if they hit under the bow, spooking shallow fish.A bigger, primary anchor at the bow insures the boat wont get blown from a honeyhole at the worst moment, or wont drag anchor and drift away while you're off wade-fishing.

If your jonboat develops a crack and needs patching, have it heliarc welded. Or if you have a small leak or two, put a little water in the boat with a garden hose, climb underneath and watch for a telltale drip. Mark it with a red Magic Marker. Let the boat dry, and then patch the hole with J-B Weld. It's good stuff.

There are shabby-looking jonboats whose owners wont paint them, because they won't buy a $15 quart of paint. That's what it took to paint the inside of my 15-footer, though I didn't go below the plywood deck plates. The finished job with two coats looks great. (I used Rust Scat paint and their color code for olive drab is 8405). After that, a half-quart put two coats on the outer sides. I prefer olive drab (OD) paint on my Jon boat, probably because we hunted ducks for 20 years with these same boats, and that was the standard color.

When you've got your last Klick out of that jonoat, and it can't be sold to another boat owner, consider a recycle center, where they will pay greenback dollars and convert worn-out aluminum into another shiny new jonboat...or beer cans. Either way, you've made somebody happy. Discarded jonboats, especially those crushed or stove-in from fallen trees, should be hauled straight to the scrapyard and reborn.