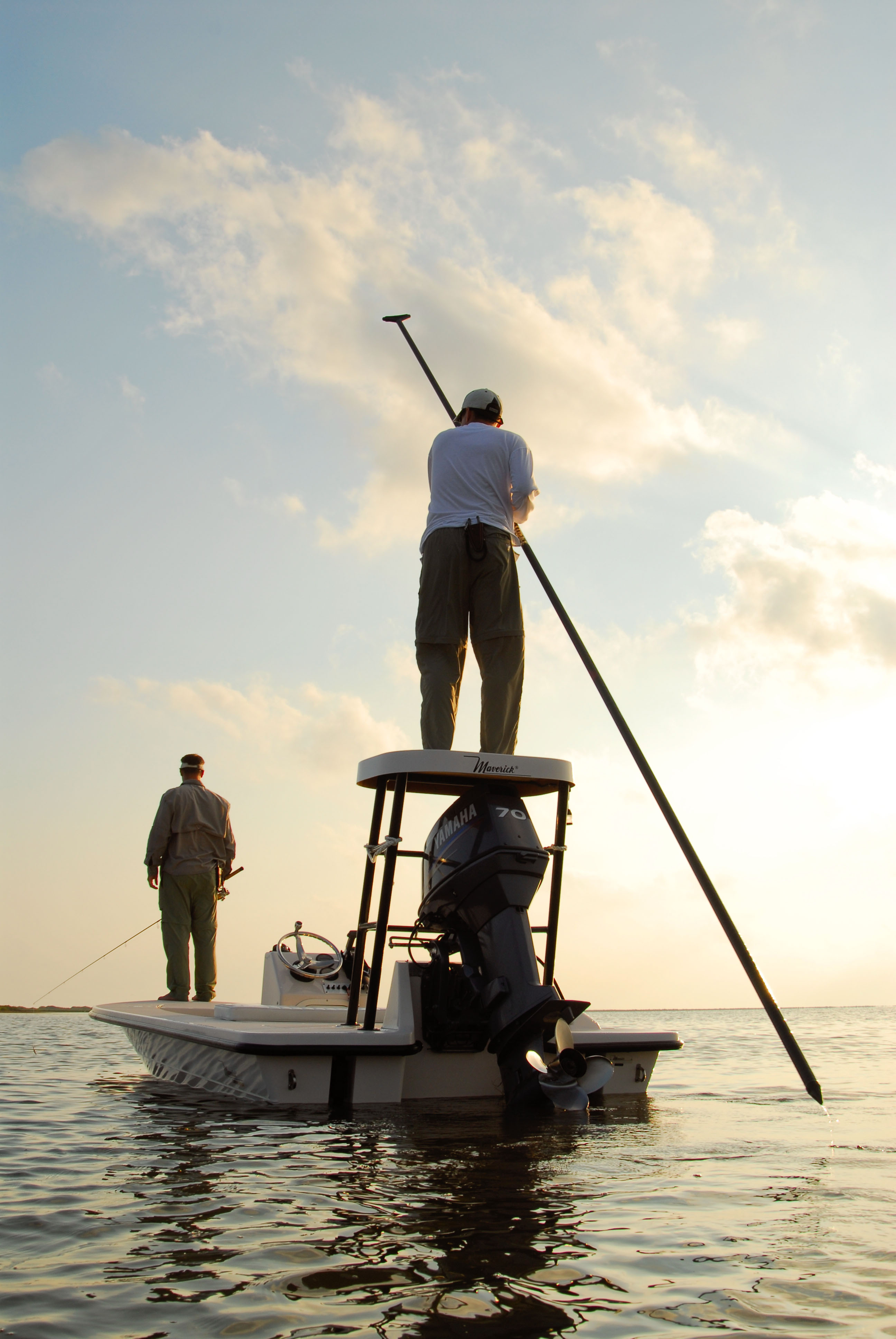 Using a pole to propel or maneuver a boat is a method that dates back to long before probably even hook and line fishing. I have read about Native Americans pushing dugout canoes around and even seem to remember seeing a depiction of Egyptians poling vessel made of reeds across the Nile. The fact is that the art of poling a skiff has been around since the day man first took to the water, however, over time, the craft and tools used have changed. We are no longer poling around in wooden canoes with a tree limb or stout piece of bamboo. Now we now are using boats and push-poles that are made from space-age materials and state of the art manufacturing processes. The only thing that has not changed is how we do it.

It is pretty safe to say that the poling of fishing skiffs as we know it today was developed and perfected in the Florida Keys and Everglades. And, to say the least, we have come a long way since the days when Capt. Flip Pallot balanced himself atop a Mercury outboard cowling holding a fiberglass pole-vaulter's pole. Heck, just look how far we have come since the late 60s when Capt. Bill Curtis urged Bob Hewes to include a poling platform on what is now considered the first modern flats skiff. And, it is important to know, these luminaries knew exactly where to place the foot of the pole if they wanted to slow the skiff and spin it to give the angler on the bow a 10 o'clock shot at a school of bonefish.

Where the pole makes contact with bottom means everything when trying to control a skiff and, that is exactly what poling is all about, control. It does not matter how hard a person pushes, if the foot placement is not correct, control is lost.

To better explain, you have to imagine four quadrants that extent out about two-thirds the length of the push-pole with the poling platform being at the center. These quadrants represent the areas which need to be known to control the boat. We will identify these quadrants as follows; port skiff, starboard skiff, port aft and starboard aft.

Now, one of the first and most important things to know about poling a skiff is that the pole should always be on the downwind or down-current side of the boat (whichever has the greatest influence on the skiff). An example of this would be, if you are poling along in a crosswind with the wind blowing at you from the left, the pole should be on the right of your body, especially when moving forward. The reasoning behind this is because, when pushing from directly astern, the bow will want to yield ever so slightly to the "influence" giving you better control. This of course also applies when poling diagonally, into or downwind.

Moving on, it is time to understand how the quadrants I mentioned earlier come into play. To make it easier to understand we will assume that there is little to no wind or current. You will want to push or apply pressure on the side of the boat that is the direction in which you want the bow to turn. So let's say you are sitting DIW (dead in the water) and would like to move forward while turning to the left. You would then place the pole in the port aft quadrant and push. Now let's assume you are moving at a good clip and see a fish at the 12 o'clock position and need to turn the boat to give your right-handed caster a shot at it. It is not only important to turn the boat, but to also slow or stop as to not approach the fish too quickly. This is where you would move the foot of the push pole forward into the starboard skiff quadrant making contact with bottom and, rather than pushing, apply pressure and hold. This will arrest the forward momentum causing the back of the boat to slip to the left or more simply, turn the bow to the right moving the target to the eleven or ten o'clock position. It goes without saying that the exact opposite will occur by placing the foot in the opposite quadrant.

Now comes the hardest part of poling and that is where in the quadrant the foot should strike. Well a good rule of thumb is, the closer the pressure or push is applied to the center (poling platform), the less effect it will have. An exception to this rule would be when the need arises to overcome a strong headwind or current to make the skiff move forward. To do this, you must make a long powerful push forward starting close but not too close to the platform. Remember, you are trying to propel the boat forward and if the foot is too close to the transom the push pole will be close to vertical and you will be wasting energy by pushing down (in effect, lifting the stern) rather than propelling the boat. Another way to look at is, if you want to slow dramatically or stop, the faster the boat is moving, the further away from the poling platform the pressure should be applied and held. If you want to move at a quicker pace, the further away the end of the push should occur.

As for moving in a straight line, I again emphasize keeping the pole on the side opposite of the most influence or set (direction of wind/current) and push as close to the centerline as possible making small corrections in foot placement as possible. As in all aspects of poling a skiff, the biggest mistakes are made by over-correcting.

I prefer to use as light a push-pole as possible (Stiffy Guide or Stiffy Extreme) outfitted with a "true" fork of my design. This choice allows me to be quieter when approaching potential targets. By utilizing a lighter push pole, the fatigue factor is reduced making it less likely for me to lazily drag or splash the foot around when taking it in and out of the water. As for the fork, the lack of what has been called a "mud bar" or "crotch", allows it to be pulled from, and re-enter the water more quietly and without cavitation. In addition, it is less likely to get clogged with mud or grass which makes the end of the pole heavier, creating fatigue.

Only with practice will an angler learn all of the subtleties of the art of poling a skiff.