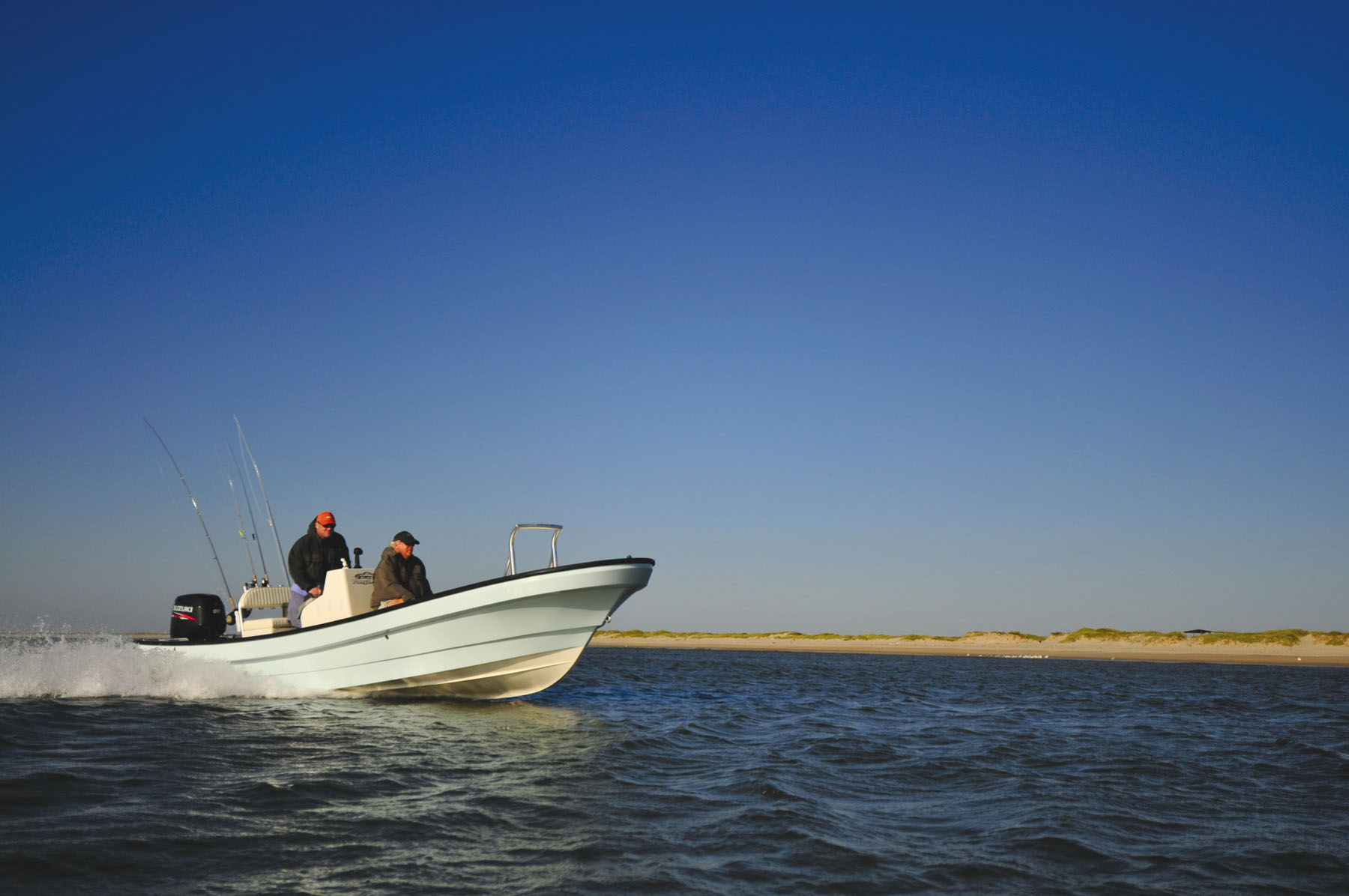 I am a marsh rat. In fact, it would be safe to say; the smaller the water, the happier I am. However, I am a sailor too so it would be foolish of me not to recognize the fact that I like the sight and adventure of open water. How to decide where to go from day to day has, in the past, been dictated by the size of the skiff I am running at the time. The small skiffs that I choose to root around in the back-country are not suited for the open water of the Gulf so the only time I get to go is when it is ridiculously calm or when I get invited by a friend who has a much bigger boat. I am here to tell you, that is just not enough for me. So, in search of the perfect boat for fishing the nearshore waters of the Gulf I have been. Actually, it has not been much of a search. I have known the solution for over twenty years but, it was not until recently that it became perfectly clear.

I encountered my first panga style skiff over twenty years ago on a dive trip in Latin America. Eight of us boarded a 22' skiff powered with a 40 horse Yamaha and I looked at the setup and thought to myself, "Yeah right, like we are going to get anywhere in this thing." My doubts were put to rest slowly but surely as the skiff climbed on plane and steadily zigzagged through the third world maze of mangroves and out into open water over a reef. I was impressed.

I did not encounter another panga until the summer of '96 when on temporary assignment to Coast Guard Station Port Isabel. As coxswain (small boat captain) my crew and I patrolled state and federal waters daily in search of Mexican nationals engaged in illegal activities. Almost every boat that we encountered were 22' pangas engaged in fishing and most were rigged with 40 or 55 hp Yamaha outboards. However, we did come across occasional 22' pangas in the middle of the night with tiller-steered 150 or 200 hp outboards.

The boats rigged with the smaller motors would see us coming, crank up and head back over a mile or two into Mexican waters, sometimes barely making it because they were usually loaded with fish and minimally powered. The boats that were over-powered and 30-40 miles into our waters, well they were trafficking narcotics, and were a whole other story. This is usually where a lengthy and dangerous chase began as these boats would head straight for the breaking surf, taking advantage of the panga's shallow draft, seaworthiness and overall rugged build and essentially escape because of the draft of our Zodiacs. This is when and where I fell in love with the design of the panga and decided that I had to have one. The only problem is that, while it can be done, it is quite a chore to buy a boat down in Mexico and get it up here to the states.

Since then, I have traveled to and from several lodges in Mexico and Central America that utilize pangas every day and am still amazed at how versatile they are. I have been poled around to catch bonefish, transported to flats to wade-fish for permit, have caught tarpon from them and have even caught roosterfish, large dorado, sailfish and my biggest fish to date- a 250 pound black marlin from one. What more could you ask for?

Where the true design of the panga originated is debated regularly however, it seems to be an undisputed fact that the most common panga style hull is 22' and is typically referred to as the Yamaha Panga. This design, as I understand it, was a project sponsored by the World Bank hoping to create a safe, economical to operate and affordable craft for the commercial fisherman of third world nations and that Yamaha engineers had a big part in helping create it. In fact, Yamaha's contribution to the design significantly helped them gain the market share of outboard sales in Latin America. There are not too many of these boats that you do not see sporting a 40 or 55 hp Yamaha tiller motor. The long and short of it is, no matter what the history, a near perfect fishing craft was created and it was only a matter of time before someone decided to make them better. Enter- Panga Marine.

About 30 years ago, a gentleman by the name of Rob McDaniel used to fish down on the Yucatan quite regularly. In fact, he was down there enough that he partnered with a friend that owned a resort and bought a panga. He loved the boat but had ultimately decided, the boat would be better if it was built with more modern materials (no wood) so he went into the boat building business and started building the craft in Guadalajara in 2003. Then, after a while, he realized that because of where he was that the evolution of these boats was limited due to the absence of modern technology and decided to move the molds to Sarasota, FL where his factory remains. He is the man responsible for bringing the panga to the states where they are now easily obtainable and are built better than ever.

Knowing for so long that the panga would be perfect for the fly or light-tackle angler interested in fishing the nearshore waters of the Gulf, I set out to get my hands on one and try it out. Well my dreams came true when McDaniel offered to loan me a 20' Panga Marine Super Skiff to see if was all that I hoped it would be. I have to say it has far exceeded my expectations both in performance and the way it fishes in rough water.

Case in point, recently I hooked up with Dave Hayward, manager of the Swan Point Landing Fly Shop, and friend Jeff Shatto to put it to the test. We headed out of POC in a 25 mph norther heading for the jetties to do a little dredging for whatever might bite a fly. While the ride was wet (I do not think any boat would be dry), it was not uncomfortable or unsafe and once we got there, we were able to fish off the end of the jetties in some pretty nasty conditions. Add to that, when in calmer waters, the boat was getting 36 mph with a fuel burn of about 8 mpg with a 90 hp four-stroke opened up. Imagine what it could do with a 115 and minus three tubby anglers.

So now, after having it for a while and utilizing it several times to fish the jetties, beach front, offshore and even to cross a very snotty bay to go do some wade-fishing, I cannot say enough about it other than- I have to have one.

Now with that being said- here is to hoping you all have a Merry Christmas and stuff like that!