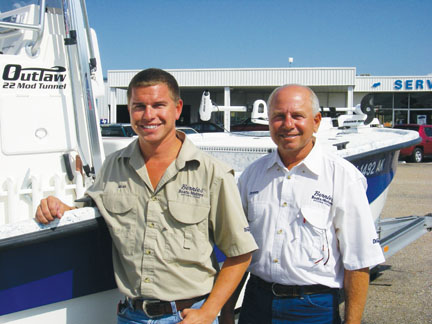 Bernie's Boats and Motors was established in 1952 by Bernie and Joyce Stumfoll, originally part of Bernie's Sinclair service station. With customers looking for boats, Bernie began building kit boats from Chris Craft and selling Mercury outboards. In 1954 Bernie acquired the Evinrude outboard motor line. By 1957 Bernie made the decision to leave the service station business and become involved full time in the boating industry. With the completion of a new building, Bernie's added the boat lines of Holmes, Helton and Glastron.

Through the years Bernie built the business on customer service and customer satisfaction. Looking back, he says this is what carried the business through tough times when others could not survive.

In 1976, Bernie's son, Dennis joined the business and helped continue what his father had started. Still growing, Bernie's Boats and Motors built a new store in 1977 where they operate today. In 1994, Dennis bought his father out and became the sole owner. With Dennis at the helm, the business continues to grow. Just like his father, Dennis' insistence on customer service and quality workmanship in rigging and repair, has served them well.

Over the years, Bernie's has won every major customer service award given by the manufacturers they represent. In 1983, Bernie's was one of the first dealers to sign with Yamaha and in 1988 decided to drop Evinrude, giving their full attention to the Yamaha brand. Today, the staff of three service techs are all Yamaha factory trained.

Bernie's line was expanded in 2006 to include their proprietary Desperado high-performance bay boats. The 22' Desperado Outlaw handles rough water and shallow water equally well, gliding across flats with the efficiency of a true flats skiff and still capable of Cadillac smoothness in gulf surf and wind-driven bay chop. Standard features and options lists are nearly endless and each boat can be built and rigged to buyer's specifications in their shop.

Whether you take delivery of a complete rig or a new outboard, every customer is given a complete rundown and taken to the lake for on-the-water testing and operator instruction as the final step in their 100% customer satisfaction plan.

From the time you walk through the door and all the way through purchase and taking delivery, you'll find Bernie's staff courteous and eager to serve. Pay them a visit at 5001 North Navarro in Victoria, call 361 573 7809, or visit online berniesboats.com to learn more about their lineup of Desperado, VIP, Bay Stealth, Express, Flatlander and Comet Boats along with Yamaha outboards, parts and accessories.