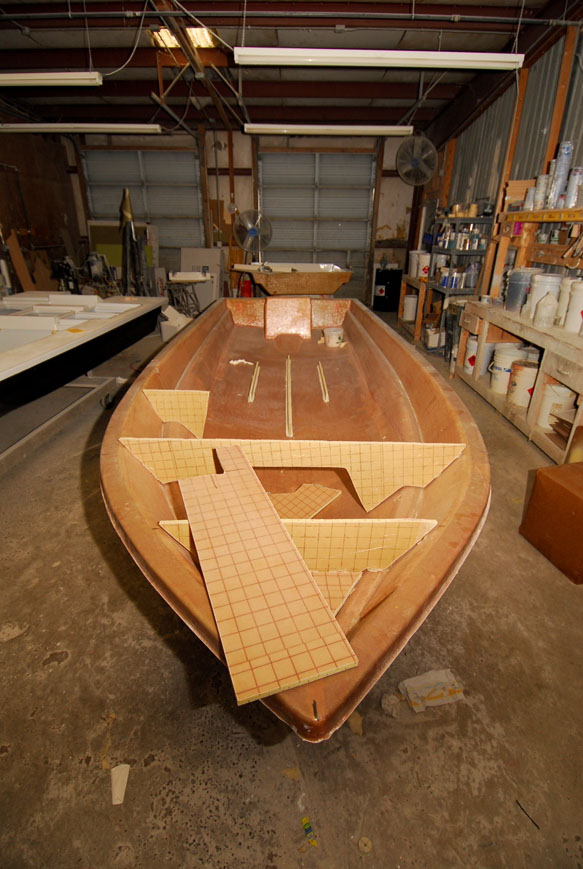 My Hull after it was bagged.
People ask many questions of fishing guides. One that I hear often is, “Why are those little poling skiffs like you run so expensive?”  Answering on the spot is not always easy given that some of the folks do not understand everything that goes into building a poling skiff. But before I dive into here I would like to give you a little history and background on the subject.

Back in the mid 90s, legendary flats guides Flip Pallot and Hal Chittum put their heads together and collaborated with master boat builder Chris Morejohn to create what they hoped would become the ultimate flats skiff. It was the perfect combination mind you. Pallot and Chittum brought years of experience to the table with thousands of hours of research and development (through running and fishing out of dozens of other skiffs and making various changes and improvements to them over the years) and Morejohn brought the technical, new-age construction techniques from the sailing industry. What they came up with was a very light flats skiff that could be operated with a 25 HP motor and poled quietly in just under 5 inches of water with two anglers onboard. Their first effort became known as the Hell’s Bay Boatworks Whipray-16 and it revolutionized the flats skiff as we knew it. Since then, Hell’s Bay Boatworks (HBB) has added several other models to their lineup.

Over the course of 10 years the company had some serious ups and downs, though. The first came when Chittum and his partners sold the business. Before long the new owner landed in a financial crisis that affected production and, needless to say, this blemished the company’s reputation.  The nosedive ended with Hell’s Bay closing their doors. HBB was no more.

There was a silver lining, though. Tom Gordon, the shop foreman for HBB and Chittum’s right-hand man, managed to purchase two HBB Waterman molds and set out on his own. Now, all the brand-faithfuls, like me, who loved the original HBB could still purchase what we thought was the perfect flats boat; light and strong with the same attention to detail that set their boats apart so many years ago.

But, things have changed once again. A couple of years back, HBB was bought out of bankruptcy by a gentleman named Chris Peterson. Many were leery at first and it took a couple of years for them to get things going however, I think it is now pretty safe to say that HBB is back on track. Peterson and his wife Wendi have dedicated themselves to returning the company to its original glory. In fact, this could not be more evident than in their latest move which was to bring back one of the key elements of HBB original quality. They recently bought back the Waterman line of boats from Gordon and then, in an unprecedented move, asked him to come back to HBB. Not too long ago I had the opportunity to visit with the Petersons and Gordon and it is obvious that they intend to remain in the skiff business.

Now, with that being said, let’s dig into one of these boats and see what makes them so special.

First off, you have to look at the construction of the hull and deck. You often hear boat builders hyping “no wood” or “all composite” construction. For the most part this means they laminate fiberglass to a composite board. The problem with this is that, quite often, the lamination fails due to a lack of proper chemical or mechanical bonding between the glass and the composite. This is where Hell’s Bay first set themselves apart from other builders.

To keep their boats light they opted to use foam-cored construction in the hull (no stringers) and transom. In order to do this and still create a strong, stiff hull they had to utilize a process known as vacuum-bagging where the outer skin of the hull is bonded to the core by pulling the resin through the core using vacuum pumps. This method provides a very strong mechanical bond between the skin and core and also allows for the use of a lighter lamination schedule (fewer layers) which in turn allows the substitution of a stronger, but heavier material, Kevlar, in the outer skin. Oh, and did I mention that, not only is Kevlar expensive, but this entire process is costly and labor intensive.

Another cost that many overlook when comparing boats is these are produced in strict custom fashion, meaning they are built one at a time from customer orders rather than being mass-produced and shipped off to dealers. This, again, requires a great deal of extra labor. This could not be more evident than to look at the meticulous rigging and wiring on one of these boats. Wires leave the fuse box (which they take time to label) color-coded and are then grouped to follow the same path through the boat, always at right-angles, until it reaches the point where it will power an appliance or accessory.

I have heard some say, “That is just an unnecessary marketing gimmick so they can jack the price up.” Well, in my opinion it is not. Let’s face it, all boats age and in turn things start to wear out and deteriorate. This wiring system allows the owner of the boat or service technician to go in and easily trace the numerous wires and make necessary repairs in a timely fashion which in turn saves time, money and frustration in the future.

As you can see, there is a lot more to these boats than fiberglass hull and motor. They utilize the highest quality components and materials and then step by step assemble a custom skiff that may or may not have dozens of options that the new owner chooses for their custom flats skiff. Now if that is not enough to justify the price tag, try to look at it this way. These boats are a life’s work for some and a labor of love for others. How do you put a price on that?