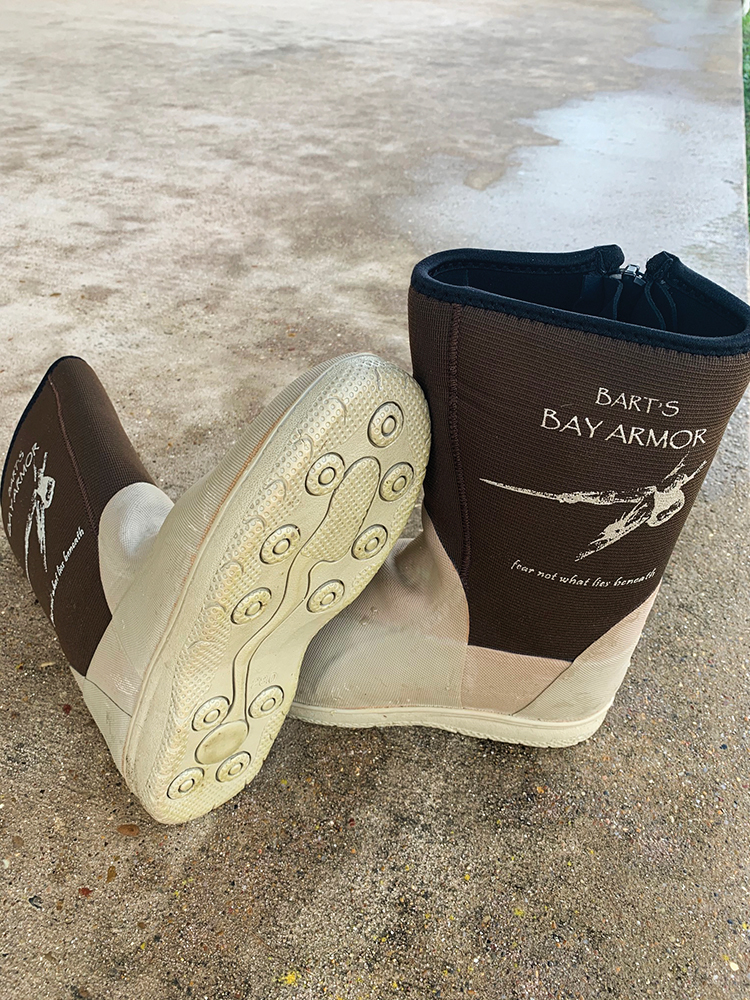 I mention the Jaws scene only because we all had the premonition that Hooper was mistaken about the cage’s ability to protect him from the shark. Kind of like shuffling your feet when wade fishing.

I have spent thousands of hours wade fishing and have worn some form of stingray protection more than twenty-five years. All that time I have never suffered a stingray injury. Nearly all my saltiest friends have, some several times. None were wearing stingray protection, and incredibly, some still don’t.

Even with my religious dedication to donning protection every time I get in the water; wearing stingray protection has never been fun or easy. The gaiter-style leg guards we strapped over wading booties offered little protection for our feet and had a nasty habit of leaving us unprotected when they rode up our legs in soft mud. Then came boots that were highly effective in the protection department, but were heavy and uncomfortable, in the boat and more so on land.

Bart’s Bay Armor to the rescue! If the weight issue has been your excuse, my size-11 Bay Armors weigh a scant 1-pound – 14-ounces each. And they are surprisingly comfortable; in the water, in the boat, and walking on land.

The ability to fend off strikes from stingray barbs comes from the unique patented protective fabric from which they are made. From the top of the shaft to the sole of the boot, a continuous layer of protective fabric encases the lower portion of the calf, the ankle region, and all of the foot.

Having first watched the video on Bart’s website where he demonstrates how the fabric resists puncturing, as soon as my boots arrived in the mail I had to see for myself. I’m not from Missouri, but I wanted to see it firsthand.

First an ice pick with a needle point. Repeated forceful stabbings and…Nada! Then a Dexter fillet knife right out of the package...still Nada! Seeing is indeed believing.

If I cannot stab an ice pick or point of a Dexter knife through the boot, I have confidence a stingray will not deal me misery if I should be unlucky to step on one.

During discussion with Bart Reid, inventor and owner of Bart’s Bay Armor, I expressed concern that the boot was not tall enough to protect the upper half of the calf. Bart referenced his investigations into the most likely region of stingray injuries occurring well below the shin, most often in the lower ankle and foot.

Not the first to raise this concern, Bart said he recognized the need for taller protection and will soon receive shipments of an accessory device, made of the same fabric as the boot itself, with hook-and-loop closure to secure it around the calf. An extension of the protective fabric, it will also function as a gravel guard to keep bits of shell and other debris out of the boots, and offer further insurance against losing a boot to the suction of deep mud when fastened snugly around the calf – see photo.

Sizing of the Bart’s Bay Armor boot deserves discussion. I wear size-10 shoes, and without heavy socks, the size-10 boot is a good fit. Typically, though, for wet-wading I wear neoprene wading socks inside my wading boots, which bumped me up a size to 11s. For colder weather, with waders and thick wool socks, I would recommend going up two sizes.

I also give the Bay Armor boots good marks in the toughness department. Two full days of reef hopping in San Antonio Bay, walking on heavy oyster shell the whole time, the soles of my test boots came through with flying colors. No cuts, no nicks, only minimal scuffing. I can’t help it, I still shuffle.

Bart’s Bay Armor’s marketing slogan is, “Fear not what lies beneath.” As far as stingray protection is concerned, and protecting feet from sharp objects, I am inclined to believe that slogan is accurate. Time will tell and I intend to put my Bay Armors through many more days of equally rigorous testing.