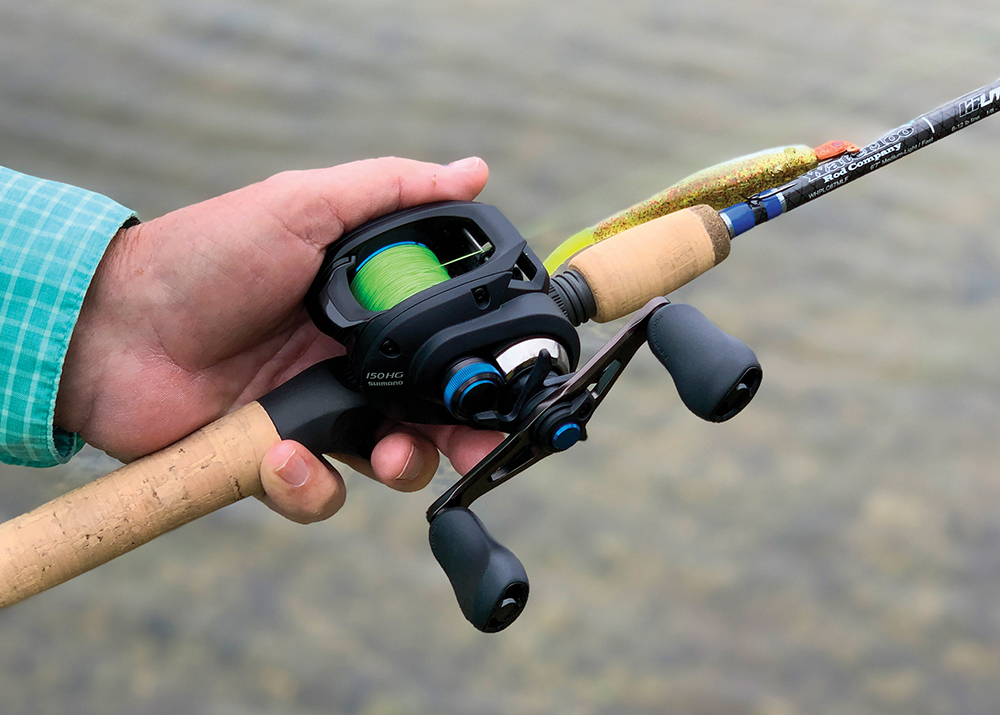 We got our first peek of the SLX DC at ICAST 2019 back in July. ICAST is an acronym for International Conference of Allied Sportfishing Trades, hosted and produced by the American Sportfishing Association, the largest trade show of its kind in the world. Shimano timed the introduction of the SLX DC to coincide with the event, same as they’d done in 2018 with the Curado DC.

New Product Showcase is one of ICAST’s greatest attractions; manufacturers enter their latest and greatest in head-to-head competition for Best of Category Awards (rods, reels, lures, clothing, etc.). Members of the sportfishing media and retailers cast ballots to determine winners. Shimano earned the coveted Best New Baitcast Reel award in 2018 with the Curado DC and returned to the winner’s podium in 2019 with the SLX DC.

What you will find instead is Shimano’s I-DC4 Digital Control Braking technology. A microcomputer module that monitors spool speed 1000 times per second and applies braking force as needed to prevent overruns during the cast. While old dogs are supposedly not fond of new tricks; get over it. This is better. Much better!

Digital Control Braking technology from Shimano is not new. They first introduced it in the Calcutta TEDC back in the late ‘90s. It was reintroduced with the Calais DC in 2006, and again with the Curado DC in 2018. While highly effective in all iterations, the DC feature was originally available only in higher price point models. MSRP for the Calcutta TEDC was $500; the top-of-the-line Calais DC went for a whopping $650. Making the technology available in a more affordable package, last year’s Curado DC sells for $249.99. This year’s SLX DC is even more affordable at $189.99 – a price tag certain to appeal to anglers on smaller budgets.

So what’s all this DC stuff about anyway. Well, to put it simply, it’s as revolutionary to baitcast reels as the automatic transmission to the automobile. Learning to clutch and change gears was thankfully bypassed by technology. Likewise; anglers no longer need an “educated” thumb to control backlashes. More on that in a bit.

Digging into the nuts and bolts; the SLX DC is a 150-size reel that weighs 7.6 ounces, with ample line capacity of 12-lb mono/150 yards and braid capacity of 20-lb/150 and 30-lb/135. Gearing is all brass for smoothness and longevity. Gear ratio on the reel tested was 7.2:1 – highly applicable to the normal range of inshore applications. Other ratios available range from 6.2:1 to 8.5:1. Bearings are A-RB anti-rust. Drag capacity is advertised at 12-pounds max. Available in both right and left hand models; a large tournament-style crank handle with comfortable paddle grips rounds out the package.

My test setup included spooling the reel with 30lb Power Pro – Super Slick 8 V2. I chose a 6’-6” Waterloo HP-Lite rod; the lure was a KWiggler Ball Tail Shad on the 1/8 ounce Bass Assassin jighead. I am very accustomed to the action of the rod and the lure combination which, I hoped, might help smooth the learning curve.

Learning to cast the SLX DC without backlashing is simple and requires only a few minutes of practice. The sideplate opposite the handle houses a dial with settings numbered 1 through 4. Adjusting the dial to 4 applies the greatest braking force – perfect for beginners and situations requiring greatest overrun control. The smaller the number selected, the greater the casting distance…but beware!

Casting in perfect conditions with the dial on 1 (light wind at your back) will provide the greatest casting distance. Turning to face the wind, you might want to adjust upward to 3 or even 4. Your cast will not carry as far but you won’t have to control the speed of the spool with your “educated” thumb.

Another likely scenario would be skipping a lure under mangrove limbs or docks. Adjusting the dial to 4 would provide greatest control; more experienced anglers might feel safe with a lighter setting.

During testing, it occurred to me that the greatest advantage of the SLX DC for experienced anglers might be found in sight-fishing. While I’ve caught hundreds of fish while sight-fishing with traditional baitcast reels, for really serious work, I always felt better equipped with a spinning rig when one was available. Nobody wants a backlash when a fish chomps down on their lure. Like when a fish appears instantly only a few yards away, or suddenly alongside the boat. The spinner has always been a better choice – for me anyway. I can’t wait to try the SLX!

This reel could also prove highly useful when casting a plastic bait or live shrimp under a float. The cork rig can be ungainly even in expert hands. Younger and less experienced anglers need all the help they can get. Adjust their SLX DC to 4, turn them loose, and enjoy your own fishing. Once they get the hang of it you can reduce the control setting for longer casts.

Getting to know the reel, being a long-time spool thumber, my first instinct was to allow my thumb to ride the spool just ever-so lightly. Don’t do this! All it will accomplish is confusing the microcomputer and might produce a backlash if you let up suddenly. Instead, keep your thumb completely off the spool during the cast and then clamp down on it the instant it lands. New trick for an old dog, for sure.

After the no-thumbing discovery mentioned above, I began with 15 mph wind at my back, cast control adjusted to the 4 setting. No backlash – the lure sailed about 25 yards. I proceeded to reduce the control setting in steps, all the way down to 1. Casting distance increased about 10 yards with each reduction of cast control. Failing to clamp down on the spool when the lure touches down will almost always produce a few loose coils of line on the spool, but by no means a backlash. Clamp down on it and you’ll be ready to begin your lure presentation the instant it lands.

I continued testing by changing my casting angle from varying degrees of crosswind to finally throwing straight into it. The results were all impressive, but I will say a cast into the wind with 1 showing on the dial might not be your best idea. This produced a moderate backlash, but hey, I wanted to discover the limit of the system, and I did. Adjusting to level 2 yielded a much better result and my casting distance seemed about equal or slightly better than anything I would have achieved by thumbing a standard reel.

I will conclude this report by saying the reel genuinely lived up to its advertising claims as regards trouble-free casting performance. No statement of how the reel will perform after months of service is being offered, however, the Curado DC has been fishing more than a year now and feedback on the cast control system has been very favorable. I would expect the same from the SLX DC.

If by chance you have been shy of baitcast reels for fear of backlashes, fear no more. For younger or less-experienced members of your fishing crew, put an SLX DC in their hands. If they can cast a spinner or closed-face reel it shouldn’t take long to master this one.