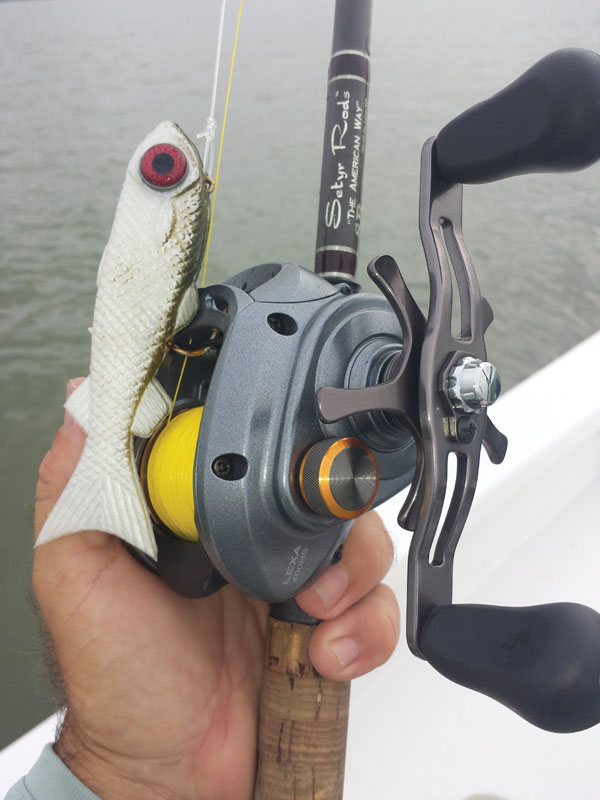 As a kid, I first started reading and expanding my knowledge of fishing through my father's old fishing magazines. To this day I still remember vivid ads and certain how-to articles that molded my thought process on how to be a more successful angler.

Many times I would question my dad or his friends about the effectiveness of a certain rod, reel or lure. My dad's normal response was, "When you read a story, you can tell if the author was getting paid to promote the product." It was many years later before I realized what he meant and I knew that I never wanted to be that writer.

Being that my whole life is centered on fishing, I see all the gadgets, gizmos and smoke-blowing that goes on in the tackle world. It takes a lot to get my attention and leave a good impression. I was fortunate to put some new tackle into use this season. Most of which I purchased, but there were some demonstrator products thrown in the mix. Included this month are some of the products I will continue using and highly recommend.

One day, it all changed. Gator Bait was advertised on a fishing show, possibly The Lone Star Sportsman back in the early 80s. The ad had a scientist in a white lab coat telling the audience you could catch any fish that swims on this bait–or your money back! The advertisement concluded with a video clip of fishermen catching all types of fish on Gator Bait. Never mind what my dad said; I knew this guy was probably on the payroll but I had to get some of his magical bait.

It looked like a bandage and smelled like old gym socks, but that stuff was good! No matter where I fished or what I fished for, my rod was bent double with my reel screaming. After buying several jars I became very disappointed when it suddenly disappeared off the market.

Fast forward about 20 years–I stumbled across a similar product by the same scientist, Dr. William Carr's Fishbites! With a similar concept and without the gym sock aroma, it catches plenty of fish. Fishbites comes in multiple scents that mimic common salt water bait species, many color options and several shapes and sizes to suit different fishing applications. Fishbites even has a soft-plastic lure line.

During the last few seasons, especially this year, I've relied upon the durability of Fishbites to put fish in the box when nothing else worked. Schools of slot-sized black drum often have swarms of small croaker, pinfish and silver trout surrounding them. When using dead shrimp, my anglers' bait would be picked clean seconds after hitting the water. This is where Fishbites saved the day - many, many times.

The DOA Swimming Mullet has been a go-to lure of mine for several years. At 5 inches long and weighing in at 1- ounces this is a big-fish lure. Long accurate casts can be made with this streamlined lure, very important for blind-casting across or into our consistent coastal breeze.

The weight-forward single hook design allows this lure to be cast and retrieved with the hook riding up. Additional jigging action is not needed, the life-like action is built right into it. I've had best success cranking at a moderate speed with the rod tip pointed at the lure. Don't let the no-frills appearance fool you, this lure actually swims very similarly to a live mullet.

Not commonly found here in Texas, I gladly picked up a half dozen at the Houston Fishing Show. I knew I should have got a couple of dozen more because the fish really like them. Early this season we hooked tarpon, kings, bull reds, jacks, snapper and spinner sharks. My anglers during the Warrior's Weekend event hooked a sea monster while casting this lure, taking turns for over an hour. We finally leadered a green sea turtle approximately 44 inches long and a couple hundred pounds. The Swimming Mullet was firmly lodged in the corner of its mouth.

When it comes to rods, I've been known to use them until the guides start to fall off. No matter the price point or design, they are all subjected to extreme use and abuse in client's hands.

For throwing lures, I have had great success with the Daiwa LEXA 721MXB. This 7-foot2-inch extra-fast action, medium-power rod performs equally well with both topwater and soft plastic lures.

For live bait applications I use the Daiwa TDS771MRB. This 7-foot7-inch rod has similar action and power as the LEXA but with more length. On an overhead cast the extra length aids in not hooking oneself in the backside, others in the boat, or the boat's gunwale.

Both of these rods are marketed as bass fishing rods, but they work just as well in the salt. Impressive features that both rods share are:

- 10 line guides, which keeps the line from ever touching the blank when deeply flexed

In the spinning rod category the 7-foot3-inch bass rod from Temple Fork Outfitters quickly became one of my favorites. TFO, a Dallas, Texas company, relies on the technical knowledge and experience of master rod designer Gary Loomis. He incorporates decades of cutting edge technology and engineering into the TFO line of conventional rods. Gary held nothing back when designing the Tactical Series.

This GTS S734-1 ($159.95) Tactical Series rod has become the one I always reach for personally. Paired with a 2500 or 3000 size reel, this rod really shines. Equally effective tossing a junior-sized topwater or a non-weighted live bait, this rod sees use on every outing. The light weight (3.9 ounces) and fast-action tip are a pleasure to cast for hours and incorporates the backbone to turn a fish and then muscle it boatside.

The Inshore Series rod is multi-functional. The slower-action tip section loads up well to catapult non-weighted live baits or Styrofoam float rigs a long distance. The components complement each other very well and the blank is TOUGH. Several times I've seen this rod fully doubled over while being pulled under the boat or wedged between the outboard and transom. Fully expecting the graphite to explode, I thought each time, "Oh well, it has caught lots of fish."

As usual, my monthly writing gets too long to fit into the given space and this month is no exception. I didn't get to reels, line, terminal tackle or clothing. Well this will have to be part one, to be continued in January. Stay warm my friends by dressing the part or at least carrying a dry change of clothing.