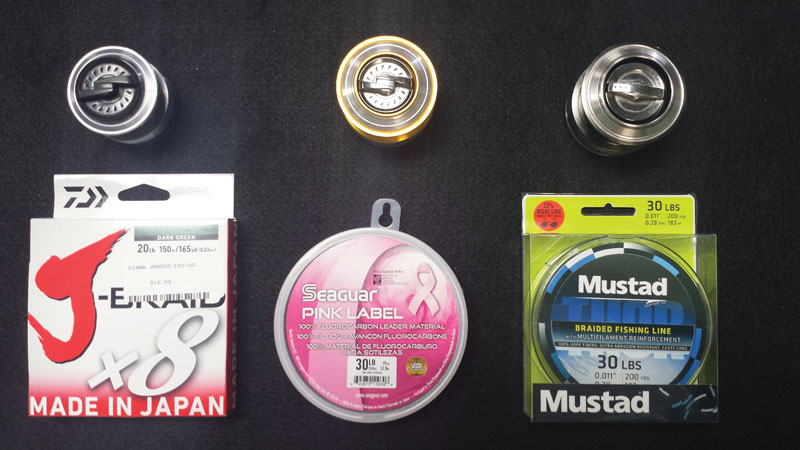 This is continued from December 2015 where I highlighted lures, bait and rods used on my charters. Same as last month, most of the tackle I will discuss here was purchased, but some are demonstrators. Not all the tackle made the cut, I'll only hit on a few that didn't shortcut my high expectations.

Some of my earliest memories of fishing tackle were the reels. My father used the Garcia Mitchell 300 and 308 series, great reels for the day, I imagine, but I didn't really like them. Being 4 or 5 years old I only knew that reeling with my left hand was awkward. I kept turning the reel upside down and reeled backward, possibly making matters worse. My father finally told me that those type of reels were only left-handed and I may as well get used to it! Was I ever surprised the first time I noticed a spinner with the handle on the right side. It didn't matter really because I was by then accustomed to using what was available.

The reels available today are far more pleasing to fish with than what I grew up using. Advances in materials and engineering; such as infinite anti-reverse, multiple roller bearings, skirted spools, heavy-duty bail springs and handles easily convertible to left or right hand are huge improvements.

Spinning reels are indispensable on my boat, we use them in most fishing applications. If there was a simpler reel design that was both user-friendly and capable of handling powerful fish, I'd employ them. Simplicity in casting with minimal tangles makes this style most attractive. Most new fisherman can be casting and catching fish right out the gate once the mechanics are demonstrated.

In the 2015 season we utilized five models of spinners from three manufacturers on my charters. Each one has features attractive to different applications as well as being multi-functional.

One was a 6000 series reel with a "bait free-spool switch" made by a top manufacturer that I won in a contest. It looked to be tailor made for casting lures to bull reds and jacks. The bail wire broke after the first dozen casts and has since only been catching dust in box full of reels in my garage needing repair. No names mentioned on this one since it was a simple manufacturing issue. Similar to the breakage of a fishing rod, in my experience most manufacturing defects will appear on the first use. Hopefully this one will be fixed over the winter and back in the lineup.

Three of the reels are made by Daiwa which coincidentally is my preferred brand. I used several Laguna-5Bi 2500 and 3000 sized reels, a couple of Exceler 3500H, and a new model to the Daiwa lineup, the Revros 3000H.

The Laguna-5Bi series is a budget-minded model with a price point of $39.99. These reels performed flawlessly unless they were soaked in saltwater numerous times. Both sizes are smooth operators that incorporate a six bearing system and micro-click drag for fine adjustment. The main difference in the sizes are line capacity, with the 3000 holding more. When using 15lb braid the 2500 had more than enough capacity at approximately 165 yards.

The Exceler 3500H reels are priced at $89.99 and have many features found on more expensive reels. A slim-line but strong frame on these reels handles the torque realized with heavy drag settings and the minimal stretch of braided line. These are workhorses, reels that can be used for multiple applications; popping cork duty, heavy-drag jetty jerkin or topwater jack crevalle casting. As with the Laguna reels they worked flawlessly unless soaked in saltwater. I lined these reels with 200 yards of 30lb braid with a heavy drag most of the time. I very much like the Exceler line, but will be replacing them this season with Daiwas of Magsealed construction.

Daiwa now offers several reels with the Magsealed feature. This space age technology utilizes magnetic oil that can change density and shape when a magnetic field is applied. This results in a watertight seal designed to keep unwanted elements (salt and grime) from entering the reels rotor bearing and the gearing. This should minimize malfunctions after dunking a reel while wading or other accidental soakings.

The Revros 3000H reel has impressed me more than any other spinner, especially for the price of $59.99. It hosts features normally found in much pricier reels with 8 bearings, a very sturdy frame that keeps gearing in alignment for hefty winding power and an ABS spool for smoother casts. The 3000 series has a larger diameter spool than others in its class which casts very good. The diameter allows for larger coils of line to exit the reel which allows longer casts and the use of lighter lures. Over the season I had multiple compliments on the reel's abilities. In fact several customers asked to use that reel specifically on return outings. The reel functioned in perfect synchronicity, virtually never missing a beat. Wind knots were not a problem, which is so common to the design of most spinners. The Revros handled 200 yards of 15lb braid and due to the non-existent wind knots the spool can be filled very full. I would highly recommend this reel to anglers regardless of expertise or budget.

Honorable mention goes to the KastKing Blade 3000. This reel is offered by Eposeidon, which is an internet based manufacturer-direct company. This reel performed very well under most circumstances and was well received by charter clients. It has 11 bearings, a very comfortable round EVA handle, thin blade-design gearcase and a smooth drag. This reel is primarily designed for the freshwater market, but held up well with minimal tarnishing. This reel holds approximately 150 yards of 15lb braid and was very well received by charter clients.

I used a couple of new-to-the-market braided lines this season with great success. Mustad and Daiwa both introduced some great value-priced line. In addition I've been using Seaguar fluorocarbon leader material more than ever before.

Mustad is known by most as a premier hook manufacturer worldwide. I've been using their hooks almost exclusively my whole life and consider their quality second to none. When I first noticed their new Thor braided line on retailer's shelves I didn't hesitate in getting some. With a retail price under $15 for a 200 yard spool it is quite a bargain. I would compare this line to the original Power Pro which I have preferred for many years in certain situations. The four-strand weave is very manageable when it comes to tangles that I deal with on a daily basis. I used the 15lb and 30lb on spinning tackle all season with minimal issues. Good stuff, I highly recommend it.

Daiwa also hit the market recently with a new affordable braided line they market as J-Braid X8. The line is retailing for approximately $10.99 for 165 yards. From the first spool I tried I was instantly sold. This 8-strand weave is super smooth, very soft and flexible. I've only used this on my personal lure rods but I'm sure it will crossover well to both light and heavy bait fishing applications. The first thing I noticed was that my cast was about 10 yards farther than I'm used to and that tip wrap was uncommon. "Smooth" is my best one-word description and combined with strong knot strength it is definitely a winner. I highly recommend this line and will report back with more information as I test it further.

Seaguar, the originator in fluorocarbon fishing line technology, continues to improve their products. I really like the Pink Label leader material for many reasons. The pink color instantly alerts me to what material is tied to a specific rod and reel and the color disappears instantly below the water's surface. The material is soft, but not too soft so kinks do not present a problem. Knots tie and pull down tightly to the end hardware. I highly recommend using the Seaguar pink this winter when fishing suspending lures.

Well that's all for the 2015 Gear Review folks, hopefully I didn't come across as being on anybody's payroll. Cheers to a good year of fishing in 2016!