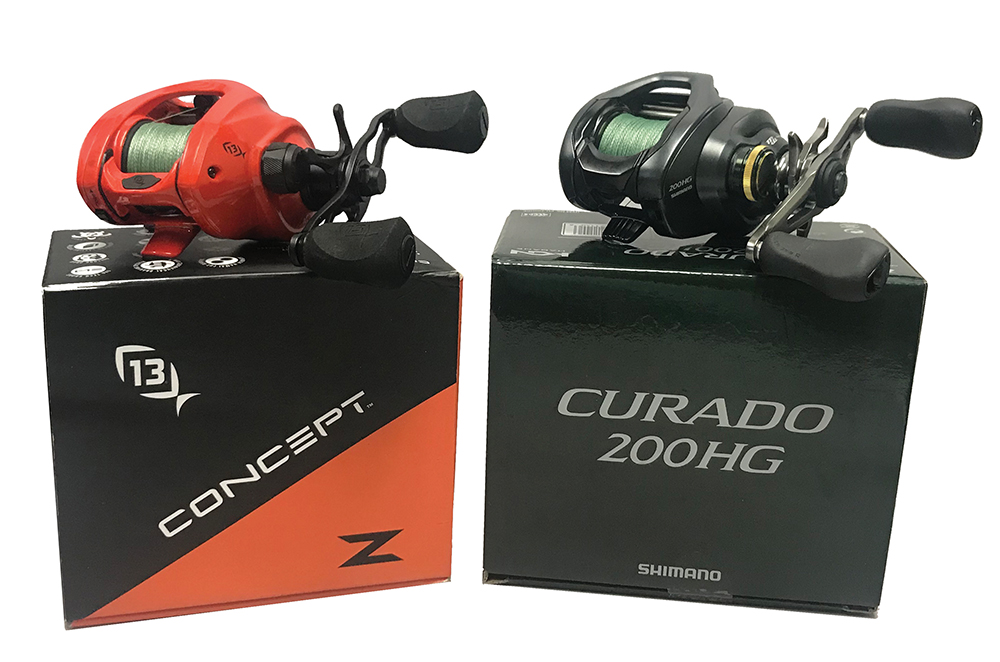 I was first introduced to two new baitcast reels at ICAST last summer and was immediately anxious to get my hands on them. That these two reels stood out among the other myriad offerings is remarkable in itself as ICAST is indeed the granddaddy of fishing tackle trade shows and the exhibitor list reads like a Who’s Who of the industry. All the major manufacturers and brands are represented for the purpose of announcing their latest and greatest goods to the marketplace.

The pace of the four-day event can be a bit dizzying, miles of aisles and many hundreds of booths. I end up spending virtually every minute the doors are open on the show floor and also attend morning and evening meetings – 16-hour days are the norm. In addition to my show activities as a member of the media, I am also a hopeless tackle junkie. In other words, I’m like a kid in a candy store, every minute for four days.

The two reels that so greatly piqued my interest during ICAST are: Shimano’s updated K Series Curado – 200 KHG, and 13 Fishing’s Concept Z.

The intent of this piece is in no way an attempt to stage a head-to-head comparison as such a format would hardly be fair – the Shimano is a 200 series and the 13 Fishing is basically what the industry would call a 100. This alone would preclude an honest head-to-head in casting and other capabilities.

Following a 30-year career in steel forging and automobile manufacturing, where staying abreast of the manufacturing and material science technology curve is paramount to survival, what I found most interesting was the incorporation of state-of-the-art technology these reels bring to the game. I also found the modest MSRPs very interesting for reels with so much technology and so many features – Curado KHG lists at $179.99 and $200 for Concept Z.

The new Curado K is the beneficiary of MicroModule gearing technology “trickle-down” from its higher-priced cousins, which contributes to exceptional smoothness in a reel of this price point. It also includes a four-pin casting brake with an external fine tune feature to enable long casts without overruns, especially useful when switching between lures of varying weights or turning to fire a quick cast into the wind.

The profile of the new KHG 200 is smaller and easier to palm than we are accustomed for 200-size reels and includes a spool opening I would describe as very user-friendly. Weight management is enhanced through the use of carbon fiber and graphite side plates. The frame is aluminum. The gear ratio is 7.4:1 and the weight is 7.6 ounces.

The 13 Fishing Concept Z has created an incredible buzz in the fishing community ever since the initial prototypes were unveiled at ICAST. In 13’s words, “The Concept Z is the first ever high-performance casting reel manufactured with zero ball bearings. The Concept Z utilizes American made CBZ (Concept Zero Bearing) polymer technology to deliver shocking results.” Think about that – this reel uses polymer bushings – no ball bearings. I haven’t used a reel without ball bearings in nearly 50 years!

I’m a saltwater wade-fisherman and my reels get wet more than I would like to admit. I will also readily admit that I do not enjoy working on reels. As such, my reels need frequent professional servicing and ball bearings that get neglected as mine do need replacing often. So, here’s what I think it boils down to: If CBZ space-age polymer technology proves successful, it could very easily revolutionize the fishing reel industry...not to mention lower reel repair bills.

The Concept Z boasts 22 pounds of drag with a gear ratio of 8.1:1. The 6 Way Centrifugal Casting Brake is almost infinitely adjustable simply by flipping the side plate. The Z tips the scale at only 6.4 ounces.

While the complete list of features and capabilities of these two reels are too extensive to be included here, I would encourage all TSFMag readers to visit their local tackle dealers and manufacturers websites to learn more…fish.shimano.com -- 13fishing.com.

The TSFMag team is packed up and heading to the Chandeleur Islands next week for our annual three days of fun aboard one of Southern Sports Fishing’s motherships. I have my new Curado KHG and Concept Z, both spooled with new braided line, ready for action.

Three days is no test of fishing reel durability but, hopefully, we’ll find the speckled trout and redfish hungry and willing, and maybe a few bull reds to test the drags. Even if the fish have lockjaw, I will be making lots of casts.

Watch for a performance and durability update on the Shimano KHG and Concept Z in coming months...