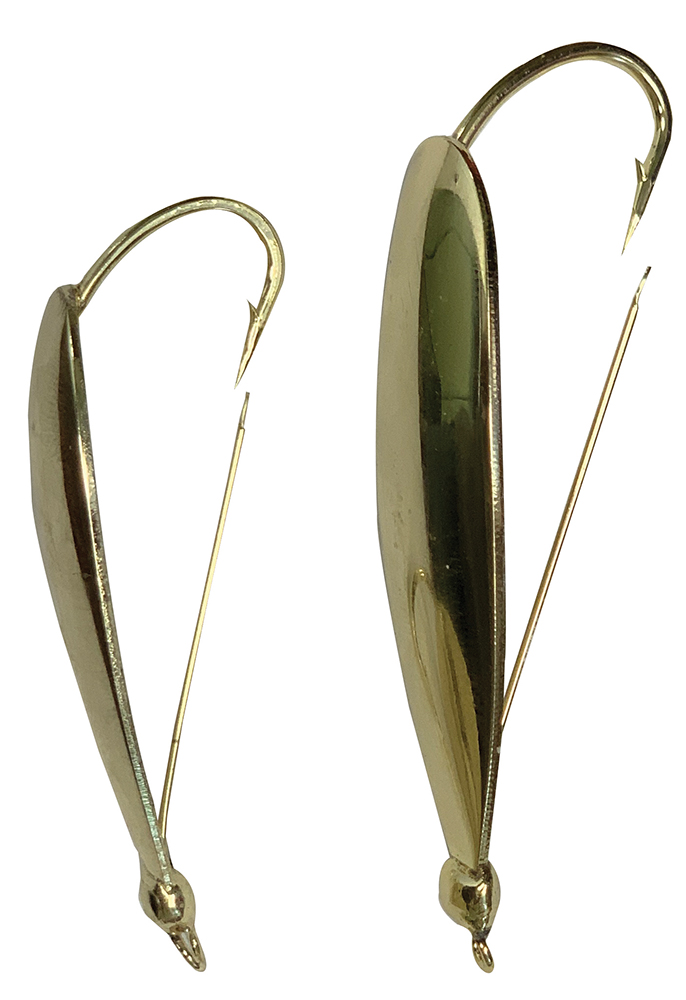 The Johnson Silver Minnow has to be one of the most popular weedless lures ever invented. It’s been catching fish in grassy situations since 1923!

Biologists describe seagrass as the foundation of the estuarine food chain; a linear network of links in a food web starting with the tiniest of organisms and ending at apex predator species. The apex predators Texas shallow-water anglers seek are primarily spotted seatrout and redfish. Any angler who has waded enough miles of flats is most certainly aware that the best fishing opportunity lies in and around grassbeds. Not so much barren sand and featureless mud bottom.

So grass is good; put that in your book. But too much grass can be a problem, whether rooted to the seafloor or dead and suspended in the water column or floating on the surface. Fishing effectively in heavily-grassed habitat requires choosing your lures carefully to avoid the risk of catching more grass than fish.

Swapping trebles for single hooks helps in some situations (see page ___ in this issue), but there are times when even this isn’t enough. A better answer sometimes lies in weedless rigging. Or should I say rigging lures to catch “less” weeds. The truth of the matter is that weedless is a relative term and therefore more of a goal than a reality at times.

There’s lots of ways to get a lure through thick grass and perhaps the most famous is the time-tested Johnson Silver Minnow Spoon. Invented in 1923, it was billed as the Original Weedless Wonder. Redfish love them and every fisherman should own several.

Another lure that deserves serious consideration is the PT-7 by DOA Lures. Though a tad dorky in appearance, don’t let that fool you. When redfish are lurking beneath floating grass mats, as we commonly see in the Laguna Madre, this little floating bait is the bomb. Just pitch it out there and walk it back. Make sure the hook point is snuggled against the soft body (but not piercing the plastic) to avoid snagging grass while maximizing the hook-up ratio. We’ll discuss a neat trick a little later that helps accomplish this.

A bait that has begun to attract a lot of attention lately for its enticing side-to-side darting action and weedless capability is the Trout Support Grass Walker. Inventor Tobin Strickland bills it as an underwater dog-walker. Whether to fish it on a non-weighted wormhook or a lightly-weighted swimbait hook depends on water depth being targeted and presentation style. I’ve used it both ways with great results for trout and redfish. Discussing presentations with Tobin, I remarked that if the fish were feeding actively and staging higher in the water column we wouldn’t need your lure…but that only happens a few hours of any given day. The Grass Walker does its best work when the fish are sulking in the grass on the bottom.

The Bass Assassin Die Dapper is another great soft plastic bait for weedless presentations and, here again, it works equally well on non-weighted and weighted hooks. The greatest attribute of this bait is the large paddle tail. Whereas most soft plastics require the angler impart some amount of twitching to create enticing action, all that is necessary with the Die Dapper is a slow-roll retrieve right down amid the grass and oyster shell. Yes, it works as well over heavy shell as it does in grass. The wobble of that big paddle tail sends all the message the fish need.

Last but not least on this list of “weedless wonders” is the KWigglers Willow Tail Shad. KWigglers owner and inventor, Wayne Davis, is a full time guide on the Lower Laguna. Wayne’s quest in developing the Willow Tail was rooted in his need for a lure that clients could use effectively in heavily-grassed conditions. Like the Die Dapper’s paddle tail, the Willow Tail wiggles enticingly with every turn of the reel handle. KWigglers also offers a specialized wormhook for the Willow Tail in weighted and non-weighted configuration. The neat thing about the weighted version is the weight can be adjusted along the hook shank for a nose-first or flat-fall presentation.

Now that we have established that shallow grassbeds attract gamefish and we need specialized lure rigging to catch them most of the time, there is yet another problem to be solved.

How can we keep the hook point just barely exposed to increase hook-up ratios while not exposing it so far that it catches grass?

Right out of the package, most soft baits have enough elasticity to remain on the hook exactly as we rig them. However, that elasticity fades quickly. Dragging the lure through heavy grass and catching a few fish usually means the lure becomes loose and wants to droop to the curve of the hook shank. When this happens, the hook point is exposed in the amount that we’re no longer fishing weedless.

Hook-Pal is a small plastic disc originally made for securing trailer hooks to spinnerbaits. To install the Hook-Pal disc on a wormhook or swimbait hook, you simply pop it into the recess on the accompanying tool and push the hook point through the disc. Next, slide the disc out of the way toward the eye of the hook. After placing the lure on the hook, with the point just barely grazing the back of the lure, slide the disc against the belly of the lure to hold it there. Viola! You’re grass-catching problem is solved!

One more tidbit – hook point alignment. Quite often we find wormhooks and swimbait hooks with the hook point angled downward in a fashion that makes it difficult to rig the point parallel with the body of the lure – just barely exposed. Grasping the hook just behind the barb with pliers and bending it upward to open the gap makes rigging easier and greatly increases the hook-up ratio.

Good luck in the grass!