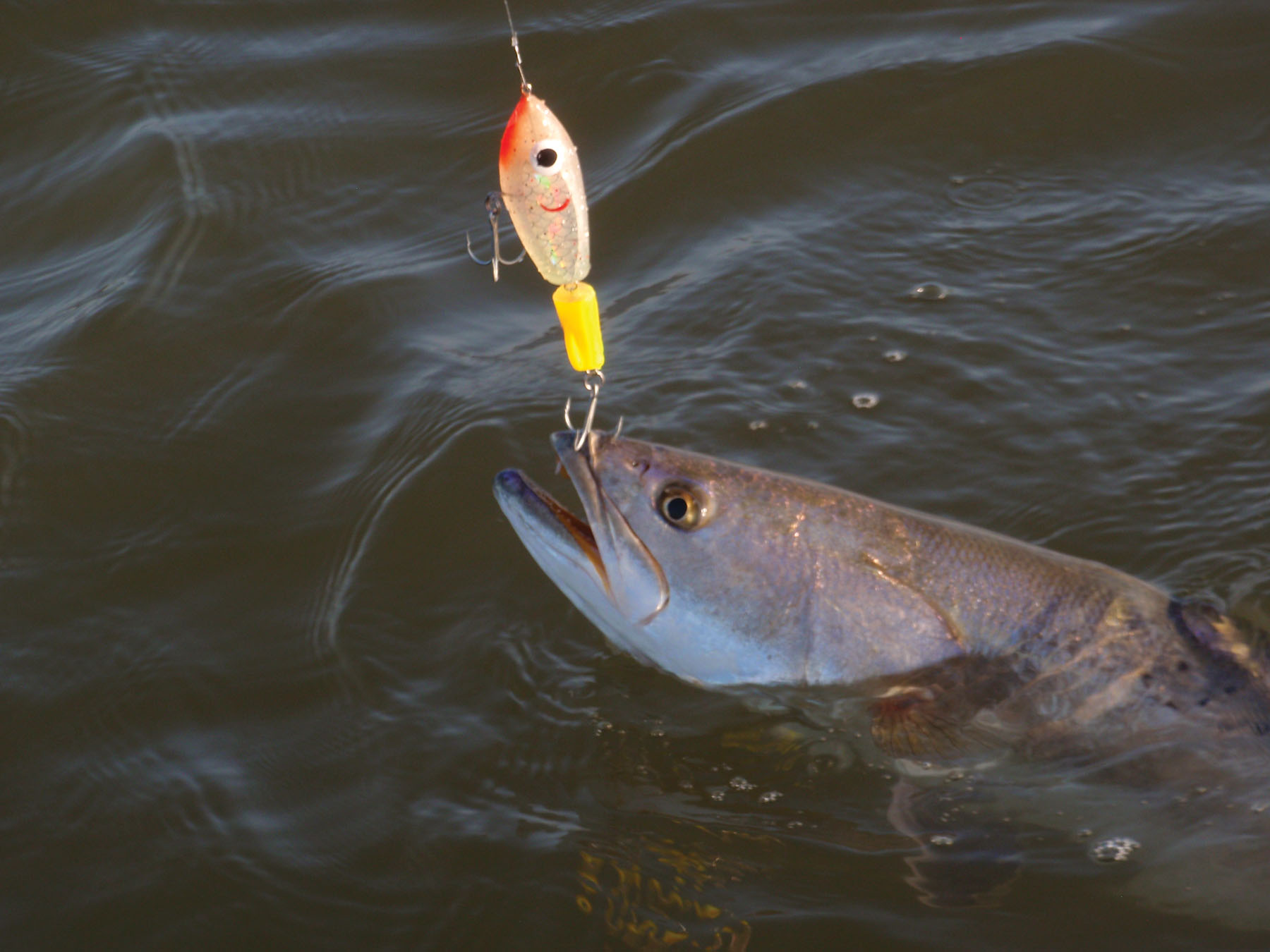 Big trout seem to approve of the jointed Fat Boy!

The story behind the invention of the Corky, Paul Brown's original lure, is a distinctly American one. The tale shows how the combined effects of ingenuity, collaboration and perseverance can lead to the creation of new and useful products. The narrative documents the way small, manufacturing-based businesses are often built upon a foundation of relationships, both within the organizations and between the companies and the clients who purchase and use their products.

Back in the 1970s, Mr. Brown and his friend Bill Norton worked together in the aircraft industry; they spent much of their free time fishing in the Galveston area. Paul preferred using live shrimp under a popping cork, but Norton eventually convinced him to commit to using artificial lures, allegedly by throwing out all his live-bait gear! As they developed their shared interest in plugging the coastal waters, the two began to look for new, exciting places to test their skills.

They turned their gaze toward the south and found their way to the isolated, pristine flats of the Lower Laguna Madre, making many weekend forays to Port Mansfield. There they found more and bigger fish, which readily attacked and destroyed the Boone tout tails upon which they regularly relied. Industrious and frugal, the buddies decided they needed to start making their own soft plastics, first to try and save money, later with the thought of making a profit.

Paul's wife Phyllis had some molds lying around the house; she'd used them to make ash trays and other ceramic knick knacks. Paul borrowed and modified some of the gear to create a mold in which he could produce six tout tails at a time. At first, he shaped them like the lures they'd always used, but then a third friend suggested he should alter their design.

Pete Tanner urged Paul to elongate and streamline the shape of the worms; he's the person who came up with the idea of making the long, slender soft plastics which are so commonly sold today. Eventually, Paul made several new molds and spent many evenings pouring out plenty of lures, giving a few away to close friends and fishing associates, like Bubba Silver. He also began selling them hand to hand.

Mr. Brown's soft plastics slowly earned a reputation in the Galveston-area coastal scene, partly due to the influence of a small tackle store on Pine Plaza in Dickinson, owned and run by Mike Carlisle. Mike organized a weekly fishing tournament, keeping the results and pictures posted on a wall inside the store. He required winners to disclose significant details related to the fish they entered, including what lures they used to catch them. Over time, Paul's lures showed up repeatedly in the testimonials of those collecting prizes.

Naturally, Mr. Carlisle wanted to sell the lures in his store, so Paul began making enough to keep his shelves stocked. He also spent numerous afternoons on the deck behind the place, hanging around the cleaning table, sharing cold beers with Mike and his customers who stopped by after they came off the water.

While the brew flowed from the cans and lips were loosened, Paul listened and learned what he could from these successful anglers. He not only used the information to help him make better lures, he also recognized the value of close relationships between business owners and their clients.

Paul began to nurture similar relationships in his growing endeavor with the soft plastics, seeking advice and soliciting testimonials from friends and experts who deployed the lures. Over time, some of these people encouraged him to consider making other types of plugs. Bubba Silver's son Jim, in particular, wanted him to make a soft version of a well-know topwater plug, the Zara Spook.

Paul had by then developed a love for throwing topwater lures and relished the idea of inventing his own; he took on the task with vigor. The first attempts to imitate the plug didn't work out as planned, but they eventually led to the invention of the original Corky lure. Today, Paul says, "You know how it is. You set out to make one thing, and you wind up making something else. We wanted to design a knock-off of the Spook, and we didn't do such a good job of that. But we did realize we'd stumbled onto something of interest."

At first, the boys were disappointed the lure wouldn't float, but as they realized how effective a slow-sinking twitch bait might turn out to be, they became excited over the new plug's potential. One essential design feature had to be perfected; they'd need to figure out exactly what material to place in the lure's center, to create the right amount of buoyancy and allow it to sink while remaining horizontal in the water.

Plastic was molded around many things which didn't work--wood, plastic and other "stuff which melted when it got hot and made a mess." Bubba came up with the idea of using cork, after reading about an old bottle of wine which survived a long hibernation on the ocean floor. Cork saved the juice in the jug; it also gave their slow-sinking plug an attractive set of attributes.

Soon after experimenting with cork in the center of the lure, the guys realized they had something special, and over time, their trips to the water to test the lures allowed them to refine and perfect the design. Paul is always quick to give Pete Tanner credit for testing the lures and giving him necessary and effective feedback on how they work; he cites Mr. Silver's main contribution as being more related to how to set up and run a productive manufacturing operation.

With Bubba's help, Paul eventually transformed his garage into what he and Phyllis refer to as "the shop", where they transformed raw materials into finished lures, one at a time, building each from the inside out, using wires, beads, cork tubes, reflective tape and raw plastic cooked in hot molds.

Paul didn't stop making adjustments once he'd created the original Corky. Eventually he modified it in several ways, altering the shape of the molded plastic to make Fat Boys and Devils, placing rattles in all sinking plugs and adding more cork to create floating versions. He also tried other, less well-known modifications.

Soon after Jim Wallace used a dark green Corky to pull a state-record trout out of Baffin Bay in 1996, demand for the slow-sinking twitchbaits rose rapidly. Remembering the successful interaction he witnessed at Mike Carlisle's tackle shop in Dickinson, Paul modeled his business in a similar way, inviting customers to come to the shop in person and pick out the lures they wanted.

All the while, he kept experimenting, working on new things, giving out samples of stuff under construction and listening carefully to stories of how the lures he'd already sold were being used to catch fish. The two-laned highway of information passes back and forth between the inventor and the users of the tools he creates; it remains well-paved to this day, and has always been a critical component in Paul's ongoing success as a lure designer.

Many accomplished anglers entered the shop over the years, bringing in stories and sharing secrets, leaving with bags of plugs, renewed hopes and bigger dreams. Mr. Brown's place acted as a hub at the center of what was arguably the best fishing network ever developed on the coast of the Lone Star State, especially for people who love to target trophy trout. His enticing plugs are hailed by many monster trout fanatics as the most effective tools ever created for tricking big specks, especially when deployed in shallow, cool water.

Paul made these lures for the fishermen, openly acknowledging the fact he couldn't have done it without their help. Most of the people who've been to the shop to buy lures go out of their way to actively promote the plugs for him. The synergy of this relationship is alive and well today.

Recently, MirrOlure purchased rights to make the Original Lure, Fat Boy and Devil from Mr. Brown. The company's executives heeded Paul's advice and continue to make the lures the same way Paul and Phyllis did. They even set up their factory to closely resemble the Brown's south Houston shop and purchase raw materials from the same sources Paul used.

The Browns now live near Lake Charles, Louisiana, in a home beside a bayou, only a couple of miles from the trout-rich reefs and flats of Big Lake. Paul still fishes out of the same 1968 Boston Whaler in which he shared space with Bubba and Pete for so many years. He also still spends time in the shop with Phyllis, tinkering with designs, always hoping to discover something productive and powerful.

These days, he collaborates with local guide Bruce Baugh on a regular basis. The two are currently working on perfecting a broken-back version of the Corky. Anyone interested in purchasing and trying them should contact Bruce's Tide Line Guide Service, at 337-660-1814.

I suspect the new lures Paul is making are much like the old ones--deadly effective when presented effectively to hungry predators. Mr. Brown has always had a knack for creating lures which are effective in all seasons; they catch many kinds of fish in widely-scattered locations. Astute anglers from Texas to Virginia now use them productively, in waters ranging from calf-deep to over twenty feet.

These plugs effectively mimic bait fish like mullet, shad and piggy perch; predators who dine on such prey find them hard to resist. All kinds of revered sport fish can be enticed to bite them, including spotted seatrout, snook, tarpon, striped bass and redfish. Mr. Brown and his buddies should be proud of the pretty plugs they invented; they revolutionized the sport of light tackle coastal angling (and the lives of legions of anglers) in the most delightful way!