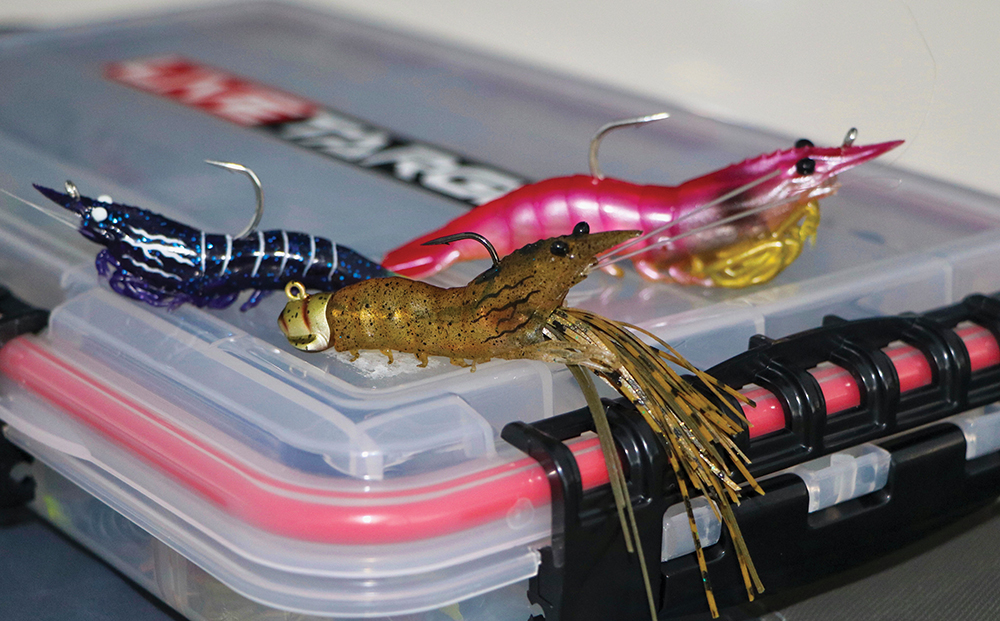 The LIVETARGET family of shrimp lures are available in a virtual rainbow of colors.

The ocean is the wrong place to be a shrimp. Here, you’re at the top of the menu – everybody’s menu. Not only must you avoid the diesel-powered trawlers, but you must also evade incalculable fish, honed by evolutionary pressures to become exceptional shrimp predators.

Anglers can exploit this innate relationship to catch more and bigger fish in the saltmarshes and on the flats. Indeed, live shrimp are a mainstay of light-tackle anglers targeting a wide variety of marine predators. Nevertheless, even live (or recently dead) shrimp presentations have their limitations: anglers must collect or purchase their own fragile crustaceans, maintain them in healthy, fishable condition throughout the trip, and rig the shrimp with extreme care to keep them feisty. And, like every natural presentation, live shrimp used as bait can result in deeply hooked fish, making injury-free releases a challenging proposition.

Meticulously designed and engineered for performance and durability, contemporary artificial shrimp reap all of the benefits of the natural predator-prey relationship that pervades the coastal flats, without any of the limitations that accompany the use of live shrimp. Perfect for any inshore predator, including speckled trout, flounder, snook and redfish, artificial shrimp can be presented using many of the same techniques that are appropriate for live shrimp. Two exceptionally productive methods are to present shrimp lures beneath a popping cork, and to swim or jig shrimp on or near the bottom.

Chug, chug, chug – the rhythm of the popping cork

To the untrained eye, popping corks look like clumsy, oversized bobbers bejeweled with clacking beads. Yes, popping corks do suspend a bait just a few feet below the surface, well within the strike zones of fish prowling these coastal flats. And yes, when the cork submerges, it’s time to set the hook – and hold on. But the link between conventional bobbers and popping corks ends there.

Generally constructed of foam, popping corks are tapered on the end closest to the lure and convex on the other. This curved face imparts the same chugging sound and water-displacing commotion associated with a traditional surface popper. Anglers can rip the popping cork forward aggressively to capture the attention of larger fish or twitch it more subtly when targeting trout.

These movements of the cork have a bite-triggering impact on the lure suspended beneath. Below the popping cork, separated by a 2-3 foot length of 30 lb. test Seaguar fluorocarbon, is where we’ve laid our trap – an artificial shrimp. As the cork chugs forward, the shrimp darts toward the surface; when the cork stops, the shrimp pendulums downward toward its original position – where it rests vulnerably until the next chug.

Two different soft plastic shrimp lures are particularly effective under popping corks. The LIVETARGET Rigged Shrimp is designed to accurately mimic the appearance of a live shrimp darting in a forward direction. Designed around a stout, saltwater grade hook and boasting an internal rattle to mimic a live shrimp’s clicking sound, the LIVETARGET Rigged Shrimp is available in 3” and 4” lengths that have broad appeal to coastal predators.

The Z-Man Rigged EZ ShrimpZ is another stand-out performer under a popping cork. With a sweet-spot length of 3.5”, a segmented, high-action body and a robust Mustad hook, the EZ ShrimpZ features a notched ¼ oz keel weight that can be easily trimmed to 1/8 oz to adjust the rate of the lure’s pendulum swing. Molded from Z-Man’s proprietary ElaZtech material, the EZ ShrimpZ won’t rip or tear, even after being extracted from the mouths of multiple toothy predators.

Fortify your popping cork presentation with the right line and rod. There’s a reason that most guides select Seaguar Smackdown braided line as the foundation of their popping cork combos: not only is it strong enough to withstand the unforgiving coastal environment, but its tight, eight-carrier weave gives it a completely round profile for long casts, as well as a velvety-smooth feel that resists kinks and wind knots. Smackdown in 30 lb. test (8 lb. test mono equivalent diameter) is a great choice on a 3000-series spinning reel, such as a Penn Battle II. A St. Croix Mojo Inshore medium heavy power, fast action rod in 7’ or 7’6” lengths pairs perfectly with popping corks.

Jig it – shrimp on and near the bottom

When shrimp are un-harassed by predators, they swim leisurely in a forward direction. But when faced by their own mortality, trying to delay their final entry into the coastal food web, they pulse their muscular (and tasty) tail and flee backwards. This is the motion and erratic action we seek to emulate as we swim and jig artificial shrimp on and near the bottom.

Jigging presentations are particularly effective in regions with high water clarity, areas where the commotion of a popping cork would scatter wary predators. Think sand flats and marsh ponds – places where sight fishing for trout, reds, and more is possible. The deception here will be visual, using lures with the right profile, color, and action, supported by other sensory inputs like sound, vibration, and even scent, to elicit bites.

The Z-Man TroutTrick Jerk ShrimpZ is a great choice for tempting shrimp-munching speckled trout. This 3.5” soft shrimp lure boasts lively appendages and twin paddletail antennae, yielding strike-triggering action as the shrimp is hopped and twitched, especially when dressed on a 3/16 oz jig. The Jerk ShrimpZ also benefits from another unique ElaZtech feature: buoyancy. At rest, the head of the Jerk ShrimpZ rises gently off the bottom, creating a highly visible, upright posture complemented by gently swaying antennae – a lifelike stance and subtle action that trout can’t resist.

When bigger, older, and wiser predators are on the agenda, a soft plastic shrimp with extreme attention to visual detail will turn lookers into biters. Available in 3/8 oz and ¾ oz weights, the new LIVETARGET Fleeing Shrimp bristles with three-dimensional anatomical features and is armed with a corrosion-resistant hook. The Fleeing Shrimp’s proprietary skirt masterfully emulates the motions of a living shrimp’s front legs, both in motion and at rest. Coupled with a subtle internal rattle and a long-lasting shrimp scent, the LIVETARGET Fleeing Shrimp may be the ultimate artificial shrimp for deceiving inshore predators.

The ocean is truly the wrong place to be a shrimp. Use the innate connection linking predators and their favorite prey to your advantage by presenting artificial shrimp whenever you target trout, snook, flounder, or redfish on coastal flats – and save the live shrimp for the dinner table.

About the author: Dr. Jason Halfen owns and operates The Technological Angler, dedicated to teaching anglers to leverage modern technology to find and catch more fish. Let your learning begin at www.technologicalangler.com