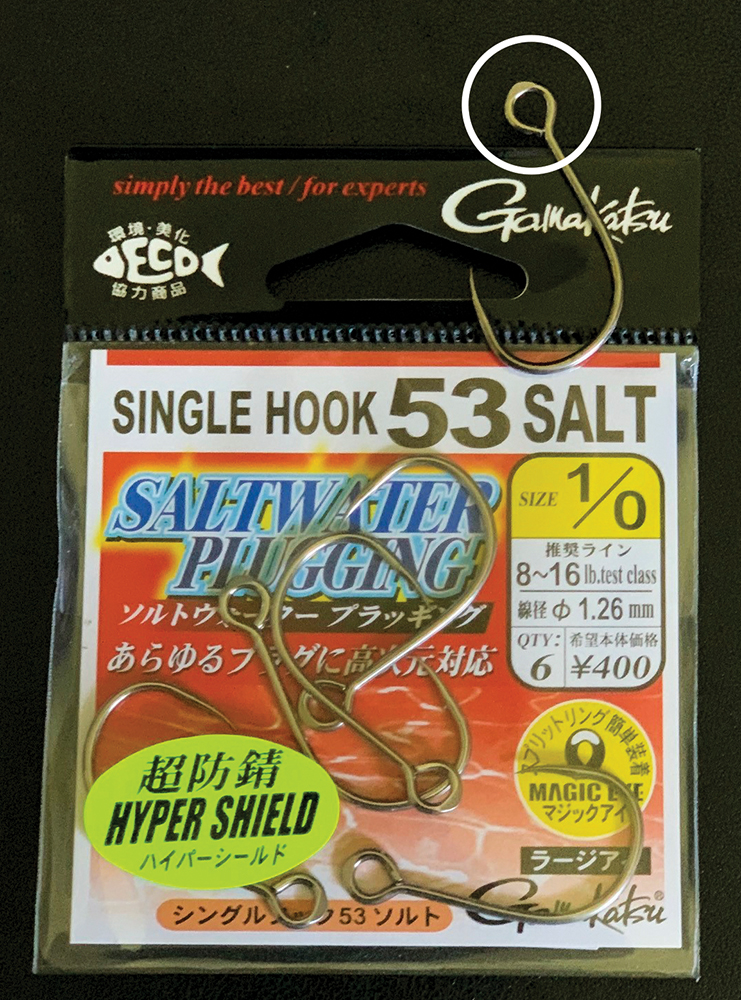 A very nice feature of the Gamakatsu Inline Single Hook – the wire that forms the eye is flattened slightly to allow slipping it onto a split ring.

As early as we learned to count we were taught that six is bigger than two. Sometime shortly thereafter we bought into more is better. As true as these facts might prove in some ways, we must accept that there are exceptions to every rule.

The late Capt. Dan Colley, who fished the Lower Laguna Madre out of Arroyo City and no stranger to grassed-up water, introduced me to single hooks on surface plugs more than twenty years ago. Skeptical at first, within only a few outings I became convinced that two hooks can be as effective as six when fishing with topwaters. You might land a few less fish on foul-hookings, but how many foul-hooked fish actually stay on the line? The bottom line here is that when fish eat single-hooked topwaters they stay hooked!

The most obvious reason to ditch trebles for singles is found after only a few casts if you’re fishing an area with lots of floating grass. Turn the reel handle a few times and treble hooks rake up a bunch grass. That dog won’t walk and the fish don’t like it any more than you do.

Shortly after the discovery that single hooks were effective on surface lures, I was fishing one February afternoon in Port O’Connor’s Pringle Lake. Big trout were staged shallow over grass and going ape for Fat Boys. Several quick rod twitches followed by a pause of several seconds was doing the trick, but a second too long produced more grass than trout. I waded back to the boat, swapped hooks, and enjoyed the rest of a memorable afternoon.

There are more reasons than grass to swap factory trebles for singles. One is rooted in conservation and the desire to release all or part of your catch. Treble hooks, by their very nature, are prone to causing greater injury to fish you wish to release.

Safety is another consideration. Ever tried to land a frisky trout or redfish on a topwater without a Boga Grip or net when wading? The Boga would be my first choice over hand-grabbing a fish bristling with barbs. Nets will never be my favorite. I have always viewed untangling treble hooks from them a waste of valuable fishing time.

Mike McBride wrote an excellent piece we published back in July 2008 that he titled; Going Single. You can find it with a quick search of our web archives. Here’s what Mike said…

That was Capt. Tricia giving orders as I tried to remove a hook from her finger…Trying to land an aggressive topwatered redfish, the silly thing torpedoed and drove the front set of treble hooks into her waders below the knee. Trying to free herself; the second set of hooks found purchase deep in the first joint of her index finger. Even more serious was blowing bubbles on each wave due to the awkward position she was caught in….Treble hooks are just flat evil; in fish, in human flesh, in landing nets, and especially in floating grass. Beyond the obvious safety factor, by using single hooks we are able to get plugs on fish in conditions we had to walk away from before. A properly rigged topwater will negotiate most everything but a full-on grass mat.

The evolution of the single hook, aimed specifically at replacing trebles has been a godsend to serious pluggers. For lack of anything better, Dan Colley used small Kahle hooks. My earliest choices were short-shank J-hooks of any flavor that looked like they might work.

The simple J-hook is forged with the eye oriented 90° to the centerline of the shank. Using them requires a second split ring be added so that the hook can align with the longitudinal axis of the lure. Properly installed – the point gap of the front hook will face forward while the gap of the rear hook faces rearward. The shorter the shank the better to preclude the hooks tangling. Gamakatsu’s Live Bait Hooks with Forged Rings in sizes 1/0, 2/0, and 3/0, intended for live baiting of large gamefish, were and still are a good choice for swapping with trebles as the additional ring is already there.

Taking things a step farther, VMC and Owner now offer inline single hooks as replacements for trebles on saltwater lures. Not to be outdone, Gamakatsu is also developing their own version that should be available soon. In case you still doubt the whole single hook concept, consider that Rapala now offers several hardbaits with single hooks rather than trebles.

Some anglers fret whether the lighter single hook might somehow impede or reduce the action of their lures. To be honest, I have never found this to be a problem. If any change in action can be detected, I believe the lighter singles actually “loosen” the lure to dive, dart, and walk more effectively.

If you haven’t climbed aboard the single hook bandwagon yet, you really should give them a try. Many of our writing team swear by single hooks and use them daily in their guide work to fish places where trebles just can’t hang…unless you enjoy catching grass.