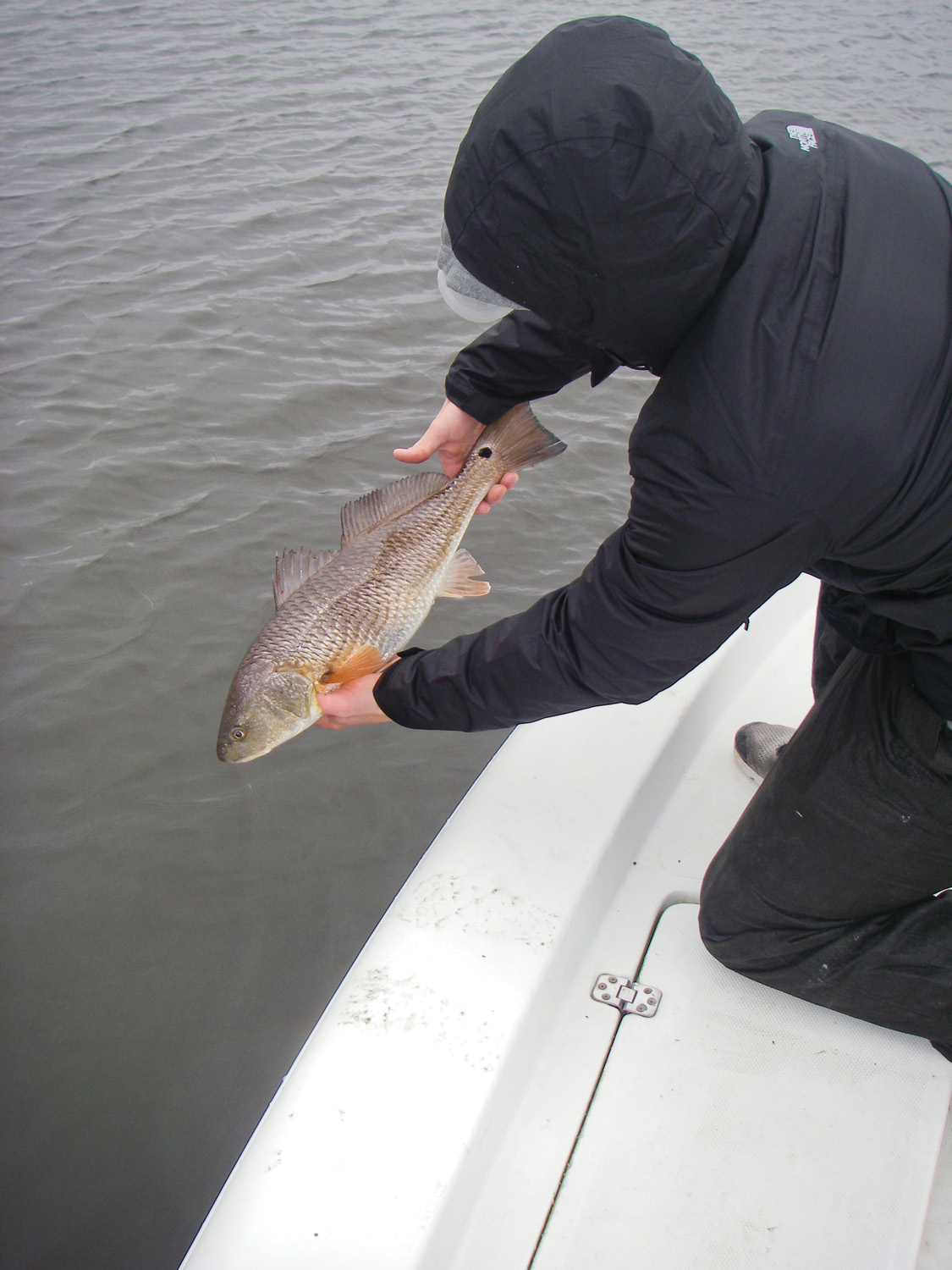 42⁰ water welcomes this red’s return after a quick photo.

We continue to deal with the closest thing to a legitimate winter that we have experienced in several years and consistent catching has required several changes in the normal game plan. Off-colored water with surface temperatures ranging from the low-50s to the low-60s has given way to low tides that completely suck the water out of the marshes and surface temperatures that fail to climb out of the 40s on any given day.

We have had very little rain, that alone is a game changer for us, and the most demanding result of that phenomenon is that we have been forced to fish incredibly clear water. We curse the lack of water clarity in Sabine Lake most of the year, but we now realize that it is far more forgiving than trying to sneak up on trout in gin-clear water. My hat’s off to lower coast guides!

As expected, following the passage of each front, we are finding most of our trout riding out the cold snaps in deeper, more comfortable water. Our initial approach was to downsize in lure selection and crawl the bait at a much slower pace across the bottom.

Very much to our surprise, however, in spite of their move to deeper water, the fish are still frequently holding in the upper part of the water column, and will attack a Fat Boy or Catch 5 as quickly as a four-inch Sea Shad or Lil’ John. It took a lot of fishless casts to accidentally figure that out.

It also took me far too long to snap to the fact that the bite-to-cast ratio increased dramatically with longer casts and smaller line diameter when the fish are in shallow water stalking their next meal. I have fished more eight- to ten-pound mono and fluorocarbon than I have fished in years and it has made an undeniable difference.

It wasn’t until we started catching five or six fish rather than one or two after immediately planting the Talon following a strike that the light came on. It also became evident that even the hum of the trolling motor prop spooked them as well. At least for right now, we are stopping well short of potentially productive spots before even launching the first long cast.

This different approach was in fact a gift obtained by observing a handful of waders that were staying put and catching far more fish most afternoons than we were. I mention afternoons only because we have done much better fishing an incoming tide after a full day of warming sunshine.

I know most of this is “old hat” to readers that deal with the clear water issue year ‘round, but I can assure you that we don’t, and we won’t be faced with that problem much longer. One or two inevitable downpours and it will be back to business as usual on Sabine Lake. When that happens, it will mark a return to braid, topwaters and five-inch Assassins rigged on 1/16-ounce heads.

While the coveted big trout of winter are still hard to come by, the size of our average trout has improved dramatically. A trout over seven pounds garners a lot of attention, but we are consistently catching enough three- to five-pound fish to warrant braving the bone chilling conditions.

Easily, the most dependable bite is provided by the redfish. It has been good on the bad days and nothing short of unreal on the good days. To some extent, the thing that upgrades good to great is the boost provided by another school of fish migrating out of the shallow marshes following a night of howling north wind.

How you choose to catch them is pretty much dealer’s choice. Vertically jigging a Hoginar or Usual Suspect off the bottom in a 12- to 15-foot washout can be productive to the point of becoming boring, but slow rolling a ‘Trap or paddle tail plastic over shell in three to five feet of water will keep you bowed up as well.

We are already catching one or two really nice flounder most trips, but it looks as though it will be at least another month before that bite lights off and that will be dependent on any flooding and the duration of the cold weather. We finished last year on a high note as far as they were concerned, and we are anticipating another great run this spring.