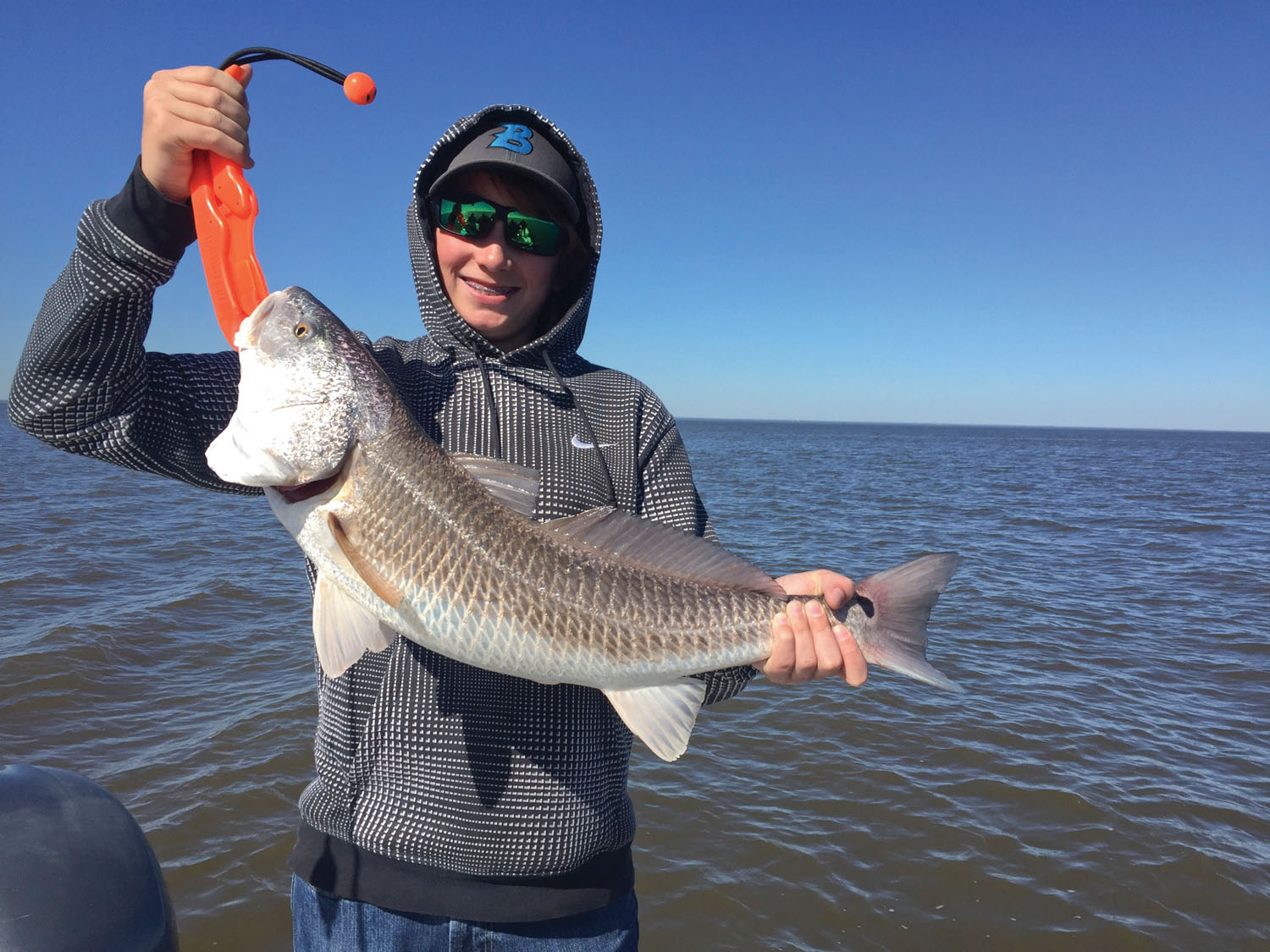 Mike Wilke was pleased with his first redfish!

For the most part, the most noticeable change this month on Sabine for anglers that have been grinding away in solitude for the past two months will be increased fishing pressure. The surface temperature is still cool enough that I will be wearing synthetic underwear and fleece bottoms under my Gulf Coast breathables when wading and my Frogg Togg's Pilot Guide rain gear when drifting.

Even in a driving rain, Frogg Togg's new Pilot suit keeps me darned near as dry as being indoors, but it really earns its stripes on a daily basis as the final layer of protection against the cold. The material is a little thicker than my everyday Toad Skinz and I can wear far less clothing underneath and still be warm. That translates to both increased comfort and more storage space when I start peeling off clothes around noon!

I never overlook the importance of tide movement, surface temperature, presence of bait fish, close proximity of deeper water, warmer mud bottom, barometric pressure and the solunar table, but in addition we are still dealing with an influx of fresh muddy water as well. Up to a certain point that doesn't stop the show, but it is definitely a game changer.

The biggest surprise thus far has been how well the trout population has handled all of the fresh water and diminishing salinity levels. We were forced to adapt to all of last spring and learned a great deal about locating and catching trout that were more concerned with simply breathing than hustling their next meal. We are currently faced with almost the same conditions, but the drop in salinity apparently does not have the same impact in the colder water.

Having said that, the coveted deep bite in both rivers and the ICW has been all but non-existent on the north end, but we are still catching both trout and reds from the mouth of East Pass to Green's Bayou. Last spring, the trout in the main lake huddled over isolated patches of scattered shell in the deeper remaining layer of saltier water and they may well do that again as the water warms.

The best news as of today is that we are still catching very solid trout up to eight pounds and upper slot reds in two to five feet of water. Even when drifting in five to six feet of water, however, our best bite is still taking place in the top two to three feet of water. I don't recall even exploring that program last spring, but mullet imitations like the Fat Boy, Soft-Dine XL and Catch 5 fished a little faster have been good choices for mining this bite.

Swimming a five inch tail on a 1/16 ounce head is always a good option and we have even had our moments with shallow running crankbaits like the Echo 1.75. We are also catching trout and reds fishing a Lil' John or 4-inch Sea Shad rigged on an unweighted 3/0 wide gap worm hook under a TKO cork.

I know that adequate salinity is a must, but we have been more concerned with water clarity of late. Invariably, even if it is only six inches to a foot, we have done better fishing tide lines and the clearer water dumping out of the marshes. The warmer water exiting backwater lakes is like a magnet for both baitfish and predators, but any clearer water has made a huge difference even well out into the lake.

I don't know that more rain won't eventually wash out this tougher but satisfactory bite in the lake, but we will be quick to target scattered shell and slow our retrieve to a crawl should that happen. And, while desperation will undoubtedly force the fishing armada into Lighthouse Cove, I prefer spending more of my time fishing the deep oyster reefs north of the Causeway.

Bumping the deep shell with plastics rigged on jig heads heavy enough to compensate for the tide is the most practiced method of fishing these deep reefs, but failing to check out the upper part of the water column can be a huge mistake. We have enjoyed banner days even when the conditions were less than perfect fishing a suspending lure like a Catch 5 or even a crankbait. If a good deep water bite dies on you, give this program a try before moving on.

Spring break should be a designated "Take Kids Fishing Week!"