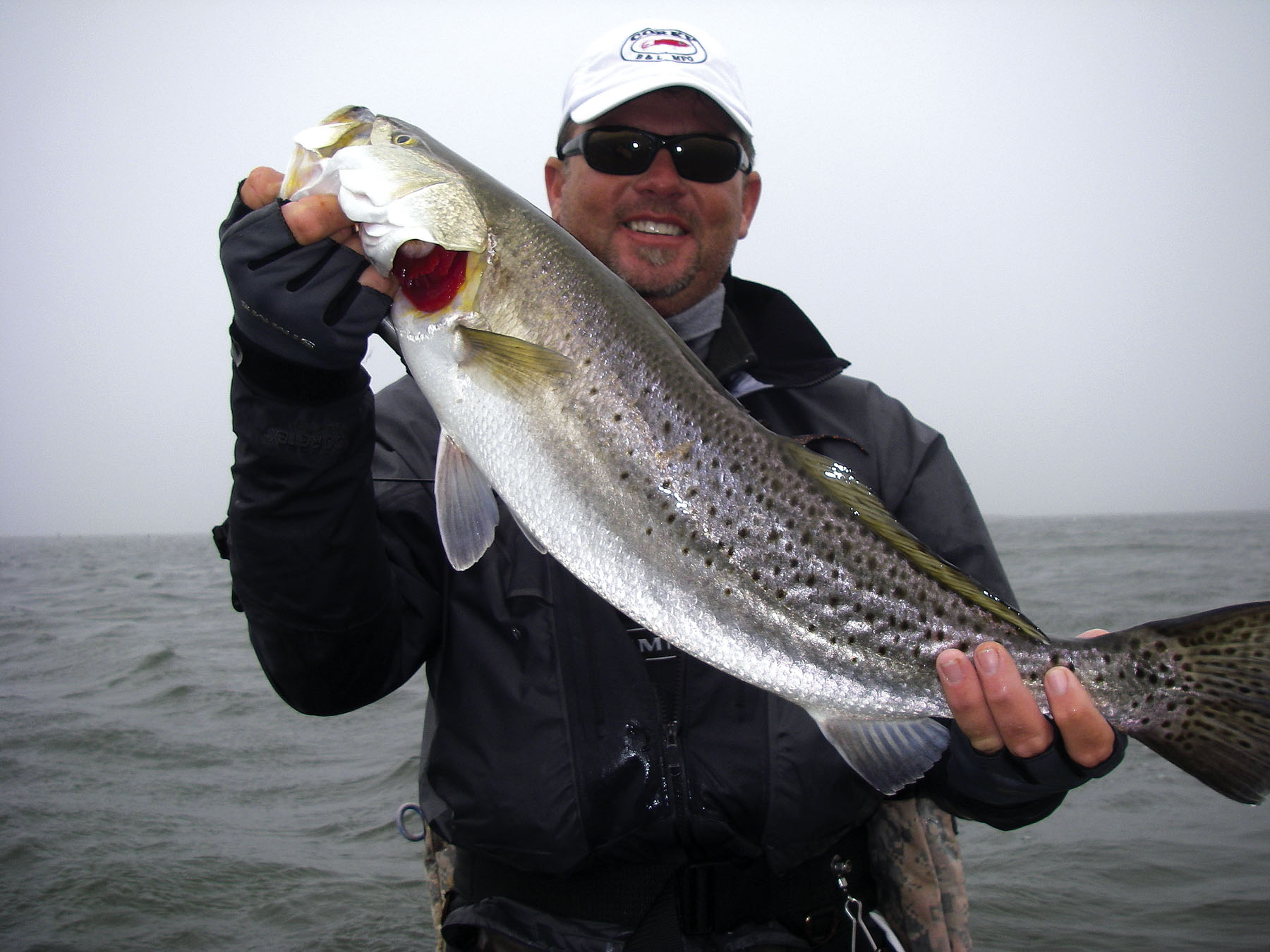 The author with an eight and a half that fell for a Bass Assassin – released.
Given the right weather to work with, February and March started out and have finished off very well. We have been so blessed to finally reap rewards in the form of large trout. Although we have not broken the ten pound mark yet this year, we have flirted with double-digit trout on a few occasions. Between clients and myself, we have had numerous trout over nine pounds, and a slew between six and eight pounds. Some days have certainly been easier than others, but the bottom line is that they have been making themselves available for the guys willing to grind them out on the tough days.

Traditionally we have had a great cold weather fishery, but I think it has just been too cold this year. There have been so many days where the water temperatures have dropped into the 40's, that it made it uncomfortable for us and the fish. The back side of cold fronts is where all of the action has been. Now that we are coming into April, I believe the fishing will stabilize. Wading deep in the "warmer" water is getting to be a little tiring, and I am looking forward to shedding my G3 waders for a pair of Simms Flats Boots and skinnier waters.

Typically, the full moon that falls closest to the end of April and beginning of May will bring our spring bull tide in. When this happens we generally get an influx of clean water coming from Port Mansfield via the Land Cut. Many trout come along with the clean water, and a vital new bait supply. It can truly be the most remarkable fishing one could ever experience. Talking with Mike McBride in Port Mansfield, they are having a brown tide bloom down there that will almost certainly have an affect on us when the big water moves in. I am trying to plan ahead to deal with it if it comes, but who knows with Mother Nature?

A few years ago I had a good friend, Mike Buchwald, come down in April and stay at my cabin for a weekend. We started fishing on a Friday afternoon, and quit about noon on that Sunday. We had been experiencing some ugly water conditions prior to his arrival, but that week we had a huge rush of water from down south and it cleared our waters to a gorgeous emerald green. It was like God had flipped a switch. That weekend produced a catch and release session that I will never forget, and I know, for sure, that Mike will not. The final tally was 2 trout over 9 pounds, 3 over 8 pounds, 5 over 7 pounds, and 23 over 6 pounds. It was just one of those weekends that you can never forget, and to share it with a close friend made it even more special. I wish I could say that this April would be the same, but we all know that experience was way outside of the norm, but the truth of the matter is that if the moon, stars, and mojo line up correctlyit could happen again.

As trout ride the tide in, they will be flowing along with the baitfish. Menhaden and mullet will come through in great schools and dictate where we fish. The crazy thing about April is that one minute we will be catching them in knee deep water on the flats, and the next day they may be so deep that you have to use your trolling motor and Power-Pole to be the most affective. Bottom line is that you need to pursue the surface bait activity to dictate where you will be the most effective, and have the highest chance of hooking up. The trout will gorge themselves at every given opportunity, so they may not always be willing to eat. Like us, they do not eat 24/7. So be patient and find areas that have good ambush spots/structure and a ample bait supply and you will get them.

Favorite lures for this time of year is, hands down, a MirrOlure She Dog to find them. I prefer it in silver with a chartreuse back on most days. Once we find them on top, we stick with it until they lose interest or have their fill. After that it is back to subsurface plastic. The Paul Brown Original by MirrOlure and the 5" Bass Assassin will get equal play time from me, just depending on the situation, structure type, etc.

"Even a fish wouldn't get into trouble if he kept his mouth shut." Author Unknown