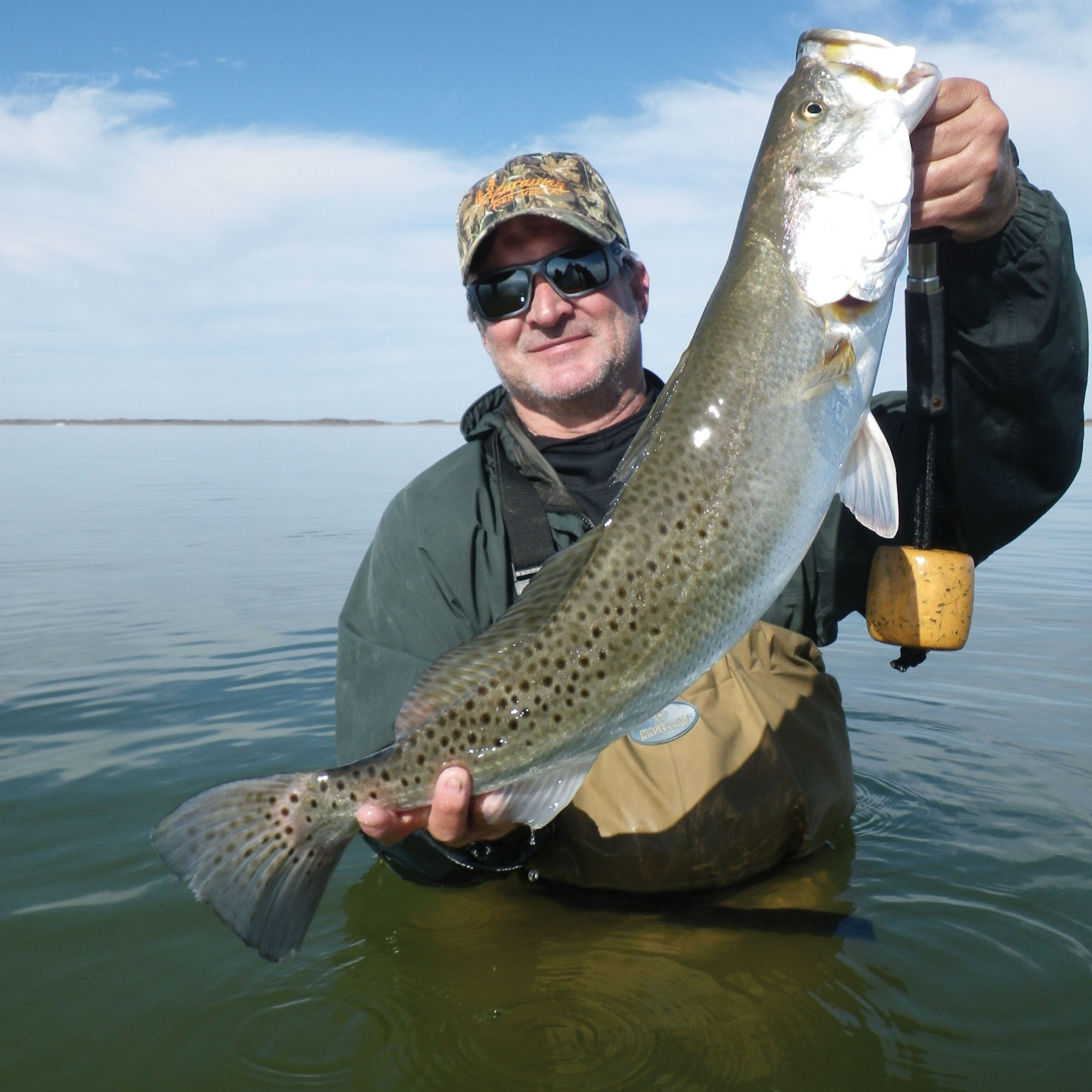 Joe Moon with a 8.5# trout caught on a Morning Glory Bass Assassin – Released!

The month of April brings a lot to the proverbial table, figuratively, and literally. Brown shrimp and baitfish have been moving up and down the Intra-coastal waterway (ICW) for a month now, and their numbers will only grow larger throughout this month as spring tides first start showing themselves. On most years, the full moon of April will send a surge of water from the Gulf into the bays, and this will begin to dilute some of the hyper-salinity we have experienced during the recent drought. Rains throughout the winter and early spring have helped a ton, but we still have a ways to go before we hit some measure of normality. The full moon hits on April 6, and experience has taught me the that the biggest push of water usually comes with the full moon closest to the end of April and beginning of May. I guess we will just have to wait and find out if my record keeping and observations hold true to form. Regardless, we will be seeing tides filled with new life in the form of predator and prey alike.

Can y'all remember the day you became hooked on fishing? I can easily remember mine from early childhood, and although a story worth hearing, I'll tell you about it another time as it is a freshwater tale. Instead, I'll tell you the one that caused me to become a Corky fanatic. It was in April 1996, and Jim Wallace had just set the new state record on a Corky that previous February. I was fortunate enough to have a few in my box that a friend had brought down to me from Houston. My longtime salt fishing buddy, David A. Murray, and I were in the back of Baffin after the spring tide had come in, and having a decent morning on topwaters, but the bite had just spiraled down miserably. I was on my way to get the boat, and noticed "David A" bowed up on a good trout. I got the boat a little closer and asked him what he caught it on, and he held up a Corky. Now we had been throwing these things for a while over the previous months, but were just not having the luck on them, so I was a bit surprised that he had gone to that lure. I was not convinced the fish were still there, so I rudely brought the boat on in at a drift, and dang if he did not do it again, only this one was bigger. I set the anchor and tied on an amber with chartreuse tail, and moved off to the side of David A. Best I can remember, David's first trout on the Corky was around 10:30 in the morning, and mine soon thereafter. We stayed on that flat all day long, dang near 'til dark, and must have caught two hundred solid fish until our four Corkys were rendered useless. I'll never forget that day, and the thought of it always brings a smile to my face when April rolls around.

As we push into April there will be an influx of new gamefish coming through the Land Cut, heading north to Baffin. With Port Mansfield's trout population booming from the five trout limit, we should see a great increase in catching as compared to what the winter and early spring gave us. Don't get me wrong, we had a decent year, but the numbers seemed to be smaller and the work a little harder. My money is on April being one of the best months of 2012 and May coming in a close second.

Exposed spoil islands along the ICW, north and south of Baffin, are going to be hotspots throughout the next two months for these migratory fish. Resident fish will be making their final push to spawn and will be scattered throughout areas holding lots of grass. These will be the fish that will make your jaw drop in awe at their size, and the ones most of my clientele will want to focus on. One little hint for you is to not walk away from grunting/croaking male trout this month. If you are catching a bunch of them, one after the other, it is most likely because they are shadowing a big female trout and waiting for the opportunity to procreate. Hang in there and you might have a chance of getting your Bass Assassin in front of the trout of dreams.