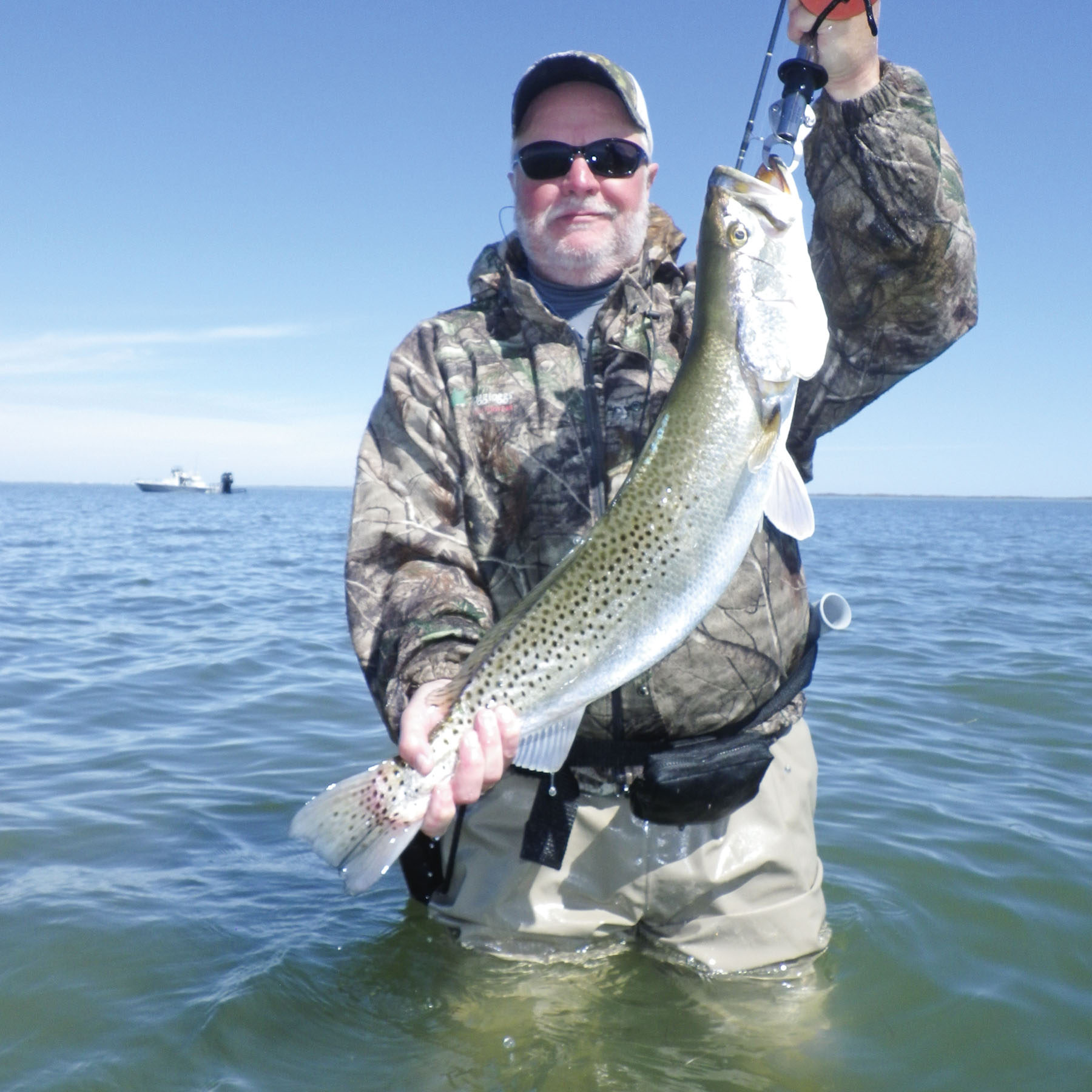 Dennis Charleton enters the 30
A wind advisory was in affect for today's fishing charter and it proved to be well founded. The front hit us around 9:00 AM with as vicious a wind as I have had to boat in for quite some time. The good news was the pre-front bite was awesome and we took full advantage, catching (but not killing) easy limits of trout up to five pounds. We made an attempt to do a second wade in sustained 35 north wind, catching a few dinks before we cried Uncle and headed back to the safety of Bluff's Landing Marina. Spring winds in Baffin Bay will humble even the saltiest of grinders. Y'all be safe out there.

April is here, and I'm glad to have her back. April was very kind to me last year and proved to be the fishiest month of 2012. February and March of 2013 have already been great months (weather permitting), but I will be looking forward to greener waters as spring tides should be entering the bay around April 25 (full moon) and I am hopeful for a repeat performance of 2012. A strong tidal push from the direction of Port Mansfield is much needed to help put a dent in the ongoing brown tide that we have been battling for a year now. Spring tides will not cure the problem but will definitely aid in bringing down the salinity count of Baffin and bring some new fish into the bay. This month has always been one of the fishiest for me - for many years.

My favorite byproduct of big April tides is the amount of baitfish that will flood our bay system. After a long winter without much of it around to be seen, morning "eye candy" of flipping mullet, shad and shrimp will be almost as exciting to me as setting the hook on a big trout. The anticipation of what is under the bait will give the knowing angler buck fever. Every cast along the edges of structure where the bait is stacked holds the potential for personal best catches, as well as many solid thumps at the end of the line. The big rush of water will also open up many more areas of potential to fish. Having a solid stretch of shoreline filled with bait, and fewer peering eyes practicing the "bent pole" pattern of fishing strategy, is something I hope for every day. The distribution of baitfish throughout the bay in April will certainly provide for those kinds of opportunities.

Patterns are pretty straight forward in April. Utilizing the Intracoastal Waterway (ICW), the bait and fish will be traveling down this virtual highway to areas of comfort like spoil islands, shorelines, and large flats that offer both cover for hiding, and sand for hunting. The many little side drains that connect the ICW to the flats are going to be major ambush spots during April. From these drains the bait and predators will start to scatter, and this is when the hunting really begins. Your eyes are going to be 50% of the hunt for you and a good pair of polarized glasses (Maui Jim brand for me) are as important as the rod and reel. When you are coming into an area that you think you may want to make a wade, stop the boat way out from the final destination and just view from afar for a few minutes. To be successful you need to see two things: bait and structure. The bait part is obvious but the structure could be many things - potholes in the grass, grass lines snaking across sandy flats, large or small dropoffs on flats, rock piles, etc. The bottom line is that trout need ambush spots to hunt successfully. Combine these hunting grounds with an ample food source and April could be your best month of the year.

A more consistent topwater bite will begin this month. My go-to topwater this season will most likely be the MirrOlure She Dog, with the occasional He Dog mixed in. Colors will be chosen based up on water clarity, bright and loud in the off-colored water and more natural patterns in the clearer stuff. This color selection also applies to the 5" Bass Assassins I am never without. With the influence of shad invading the bay, the MirrOlure Paul Brown Original Fat Boy and the MirrOdine XL will be getting lots of play time at the end of my line.