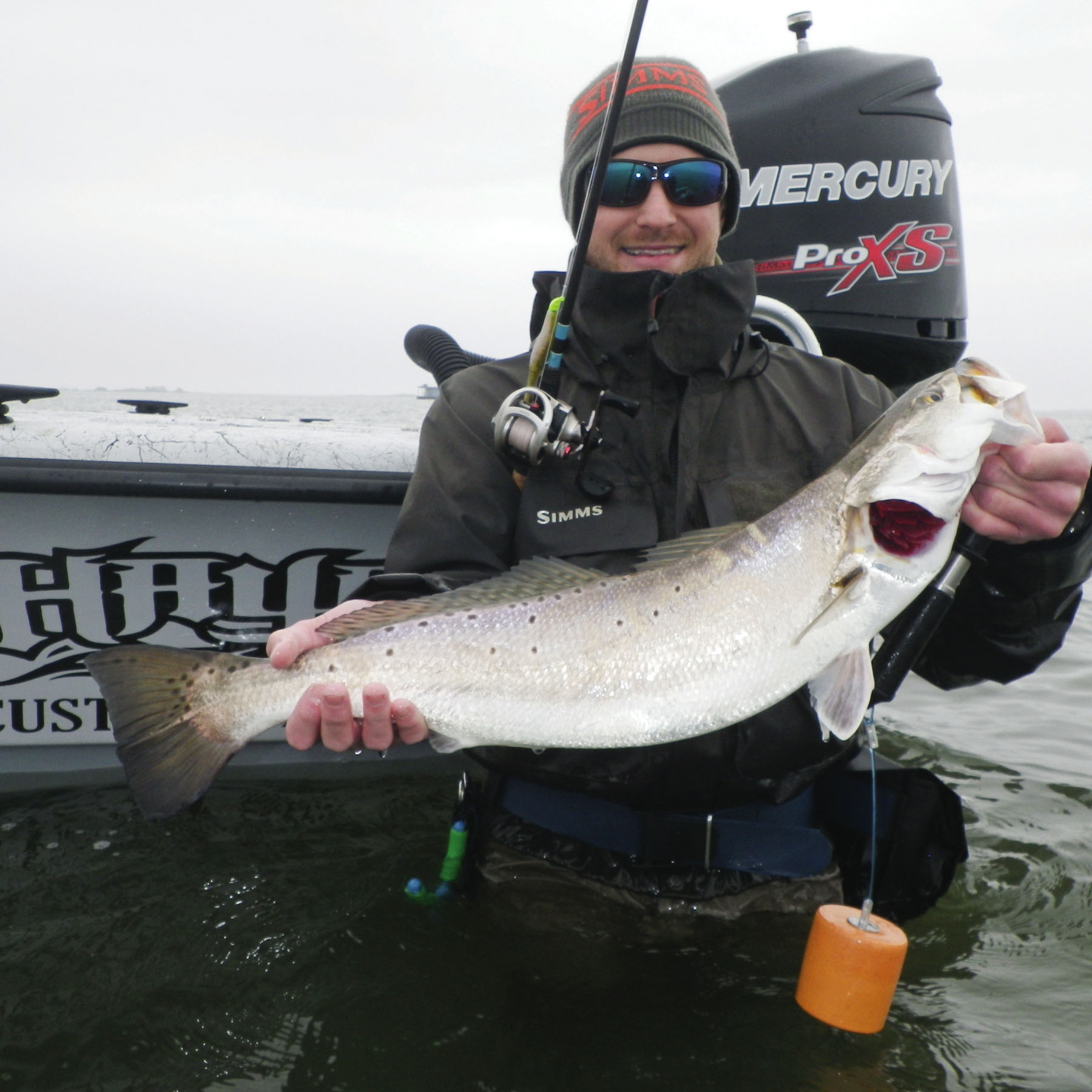 Jarret Finkhaus getting the best out of his Quantum EXO and cold Weather Simms gear.  One of three trout landed over 7lb this day, with another in the 9.5lb class.
April is an outstanding month to be in the Laguna Madre and Baffin Bay. Stabilizing weather trends and baitfish migrations are what makes this month so productive and a favorite of the lure chunkinggrinding crowd.

Brown shrimp and baitfish have been moving up and down the Intracoastal Waterway (ICW) for a month now, and their numbers will only grow larger throughout this month as spring tides begin to arrive. During most years the full moon of April will send a fresh surge of Gulf water into the system. The full moon rises on April 16, and experience has taught me the that the biggest push of water usually comes with the full moon closest to the end of April and beginning of May. In 2014 the full moon sits right in the middle of each month. I guess we will just have to wait and find out if my recordkeeping and observations hold true to form, but intuition tells me to expect some big tides and green water following "Fool's Day". Regardless, we will be seeing tides filled with new life in the form of predator and prey alike.

Some of the fastest action we will see all year, in terms of quality fish, will be in April and continuing on into May. In years past the greatest migration of trout would be coming up from Port Mansfield (south), but over the last few years the Packery Channel pass has also given us some new fish from the north. Areas like the Land Cut, Rocky Slough and Penascal Point will be the first places for these stud trout to show up from the south, while areas like Boat Hole, Nighthawk, and Emmord's Hole will be the first to be influenced from the northern pass. Trout will be on a wide variety of structure in April, but the main structure I will be seeking will be hard sand and grass. Locate these areas near the ICW, spoil islands and adjacent flats, mixed with working-bait activity, and you will be well on your way to enjoying some of the best fishing on the Gulf coast.

The rock formations in Baffin have always possessed the allure of giant trout , and April is the time of the year when I make visiting them a top priority. If you have never seen a school of mullet swimming in circles around a prehistoric rock pile before, you are missing out. What you do not see from the surface is the big trout that are keeping them there. The trout are lying around the edges of the rocks just waitingas the perfect bay predatorto slam the first thing that leaves the safety of the rock formations. I have had the good fortune to experience it many times and it is well worth the price of admission.

Warming trends during the days following cold fronts have served up a great topwater bite. This began in February and continues to the present. The consistency of our topwater fishing is much improved over the past two summer droughtwarm winter years. As we all know, 2013-2014 winter and spring have been bone-chilling cold. There is no doubt in my mind that there is a direct relationship between the trout feeding aggressively on top due to the harsh weather that has pounded them this year. Their anticipation of approaching fronts and less than ideal opportunities to feed (due to them) have just made for some crushing action on top in prefrontal conditions. I'm optimistic that the action will continue into the summer months.

Due to the high wind and, sometimes, ugly water, the loud-rattling MirrOlure He Dog and She Dog have been favorites of late. On some really howling days these are about (almost) the only lures they will eat. My second choice for windy days is the 5" Sea Shad by Bass Assassin. Unlike the straight tail I utilize most of the time the Sea Shad has a paddle tail that puts off a great vibration.

My rod and reel of choice for fishing all of the lures mentioned is the Quantum EXO reel mounted on my 6'-6" Waterloo Ultra Mag. Both are of the highest quality and I highly recommend both. The Quantum EXO reel (shown in angler photo) has been put through the paces over the past 18 months and has proven to be a workhorse of a reel. Small, tough, light, and priced right.