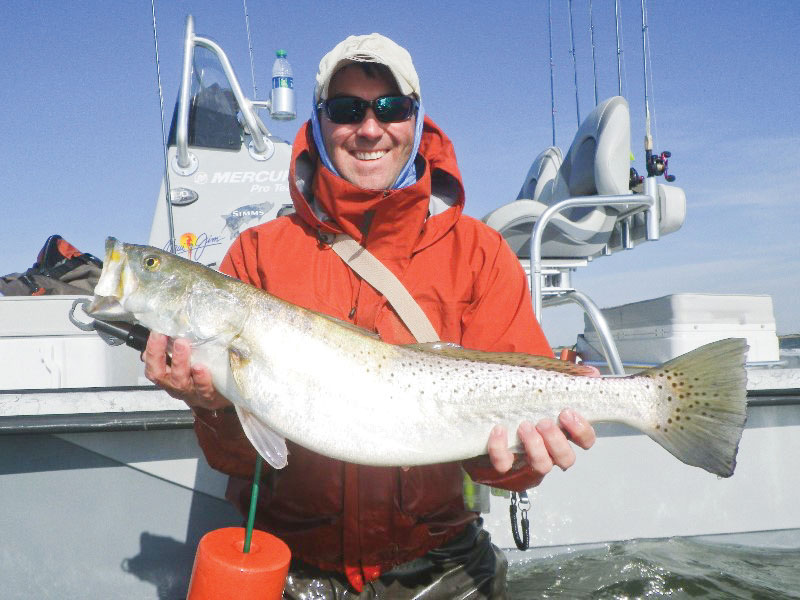 Royce Spencer stuck this pig during the middle of a cold front. Bass Assassin did the trick. Released!
A late cold front that dropped the water temperatures into the forties has put me in front of a keyboard instead of my Quantum Smoke today. I had the same clients the day before, and it made for a brutal bite while still in the low fifties. The crazy weather patterns of 2015 seem to prevail, and April should not disappoint, as it is one of the windiest of any given year. The big difference between April and March is the wind direction is almost always reliable during the fool's month, i.e., southerly.

Before I get into the when, how and where of fishing the Laguna and Baffin, I would like to share my perspective on the water quality issues we face down here. I have read numerous thoughts in print, fishing forums, and social media that there is no brown tide (algal bloom) to speak of down here. False!

Many have stated that the water is just dirty from the gusty winds. I wish that were the case, but we have had water quality issues for more than three years now due to the affects of brown tide. Short of a hurricane to flush the system, it is most likely going to be around for a while. Even at that, a tropical flushing would most likely only be a temporary fix to the real problem.

A study by Texas A&M University-Corpus Christi researchers, was established in Baffin Bay in early 2013. My fingers are crossed that this study will, scientifically, get to the root of the problem and its causes. I long for the day that I will be able to see every rock on Baffin's floor, and tall widgeon grass dancing in the waves on the Tide Gauge Bar again.

Starting with the new moon on April 18, and the full moon of May 4, something special will take place in Baffin and the Laguna Madre. This is the time of the year that we get our long-awaited spring tide. Strong tides will pull green water into the bay from down south. This tidal surge will help offset the brown tide in the heart of Baffin, and will also bring new life into the bay in the form of baitfish, and predators of all shapes and size. This two month time period can be some of the fastest action of the year for quality trout. It is a time of year that I always look forward to–big fish and lots of bites.

Travel corridors throughout the bodies of water south of Baffin will be the first to see hot action. The spoil islands east of the ICW and the shoreline of the Kennedy Ranch to Penescal Point should make for some great fishing as the new water comes in from the Mansfield cut. Many fishermen will get a jump on the action and choose to intercept the fish in the Gladys Hole area and the Land Cut as they make their northern migration. It's a long run, but can certainly be worth it. Word of caution: the Land Cut can be tough on the wade fishermen, and does have an element of danger to it; i.e. fast boats running in a confined area, barge traffic, strong tides, and tons of stingrays. Be careful!

Late winter and spring provided for some really slow action on topwater plugs. I look for this to change immensely as the water warms and all of the new finfish flood the system. Spring tides will produce an all-out aggression as it relates to trout feeding. Loud, noisy topwater plugs like the MirrOlure She Dog or He Dog will be dangling from the tip of my Waterloo Ultra Mag for many hours throughout the day. Something else to keep in mind is that the topwater action can take place throughout the day during April. Regardless of where the sun and moon are in the sky, large rafts of nervous mullet will be all that it takes to produce great action on top.

As the spring tide rolls in, I expect the water to clear up pretty darn fast behind hit. The 5" Bass Assassin will be the number one tool for locating the fish, in combination with topwater plugs. Natural colors with lots of flashy silver and gold flake have always been a favorite for this time of year. A new color that I cannot get away from throwing is the Mississippi Hippie. This Assassin color scheme has just been awesome for me, quickly finding its way onto the favorites list.