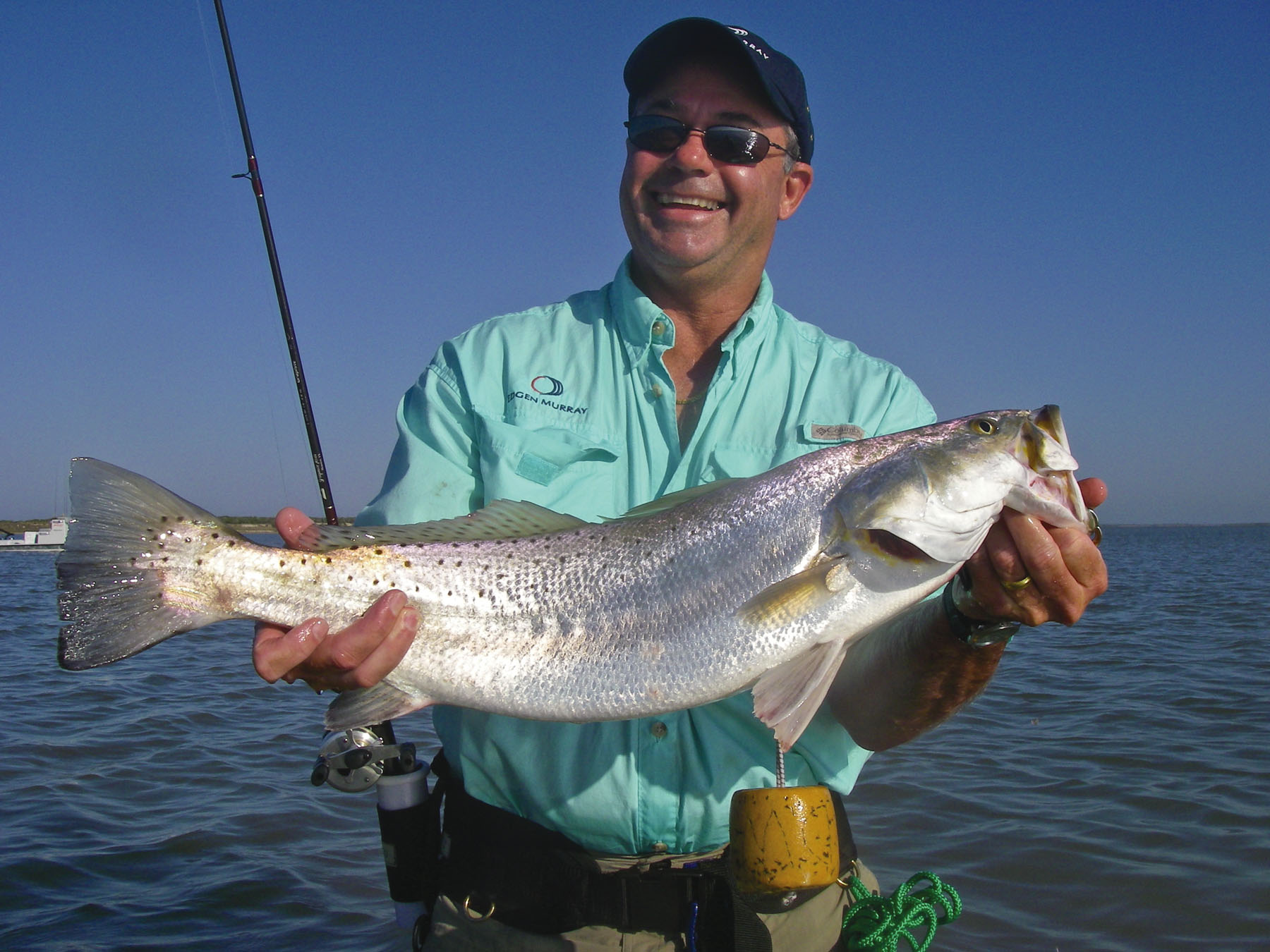 CRAIG KIEFER...... Corky Devil.......... Released
Has anyone told y'all how pretty the water is down here? I hate to sound like a broken record, but we have been so blessed with great conditions this summer. As I write, we just dodged a bullet in the form of Hurricane Alex. We have gotten some much needed rain that should keep the salinity levels down to what is considered normal on Baffin. If there is any downside to all of the rain it is with the possibility of brown tide raising its ugly head. Years of wading these bays has taught me that brown tide usually appears after a big runoff from the large ranches that keep Baffin on the wild side. I am hopeful the pristine water conditions we have been enjoying will continue through the fall and winter months.

Fishing remains good down here in the Coastal Bend. We are not setting any records in the large trout category, but we are catching great numbers of reds and trout. The large trout that we have been catching from June through the end of July have been on the skinny side. The good news is that August will bring us closer to fall when they will begin putting on more weight. Prior to becoming a guide, when I was still eligible to fish CCA's STAR Tournament, I would always swing for the fence in the first two weeks and last two weeks of the summer long tournament. I never won a STAR but released some fish in late August they were very close to the leader. I never had it in me to kill a super trout to get second place. The leader, as of writing this, is a 9-1 trout. Great fish and congrats to the angler who caught it, but my money is on an even larger fish to hit the leader board during August.

So far it has been a really hot summer. I have not checked the actual history of it, but it feels hotter than most. Wading helps with the heat and I find myself heading for deeper waters on a regular basis. It seems to work out well as the trout seem to be out there also. I know there are some rogue trout that stay up in the skinny stuff even in the heat of the day, and that is where you will most likely catch that STAR winner, but the greater numbers of trout have slipped off into the 4-6 foot depths. Usually at this time of year I am doing better on deep rocks, but the deeper grass has been paying off better than the rock pattern of late. The grass lines and potholes change every year, and with the great water clarity, I have been able to stay on top of it, and make some wades in areas that have never been great producers, but it has been different this year. Figuring out these patterns is one of the many things that will always keep fishing interesting to me. Always fish with your eyes and brain before making your first cast (not to be confused with chasing the "bent pole pattern.")

Trout have been eating topwaters on a regular basis. The bite usually only lasts until the sun comes up, but fun while it happens. Saying that, I have had some midday success with She Dogs, and the smaller She Pup under ideal conditions, i.e. bait rising during a feed period, but the heavy hitter remains the 5" Bass Assassin in natural colors like Chandeleur Isle or the new Copper Juice. MirrOlure's Paul Brown Original (PBO), in the original style, has been great when worked methodically along deep grass drop-offs. I prefer this style over the Fat Boy this time of year as it has more of a tendency to get into the depths and stay there with minimal effort. Note: Be sure and tune the tail of the PBO, and make a few short casts to make sure it is "walking the dog" properly. A little bend goes a long way with this lure, so don't over do it. I am also staying with natural colors in this lure. The Day Glo color is about as bright as I am using, and that is only after the water has been milked into a "trout green" color.

I will sign off by saying to all of the good people along the Gulf Coast that have been affected by the BP oil disaster that y'all have friends in Texas that are praying for this thing to come to a close so y'all can, hopefully, resume a normal life.

"For the rich, there is therapy. For the rest of us, there is fishing." -Unknown Author