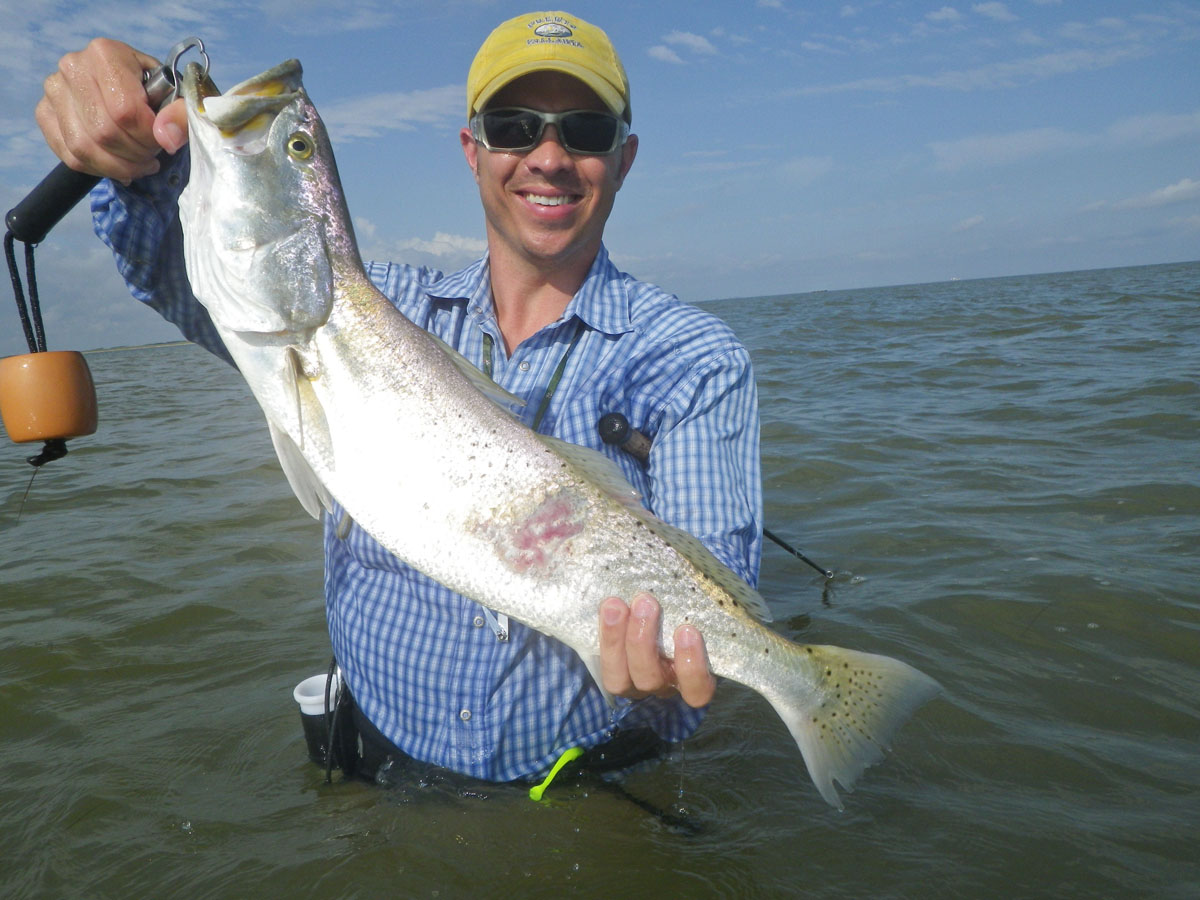 The Laguna Madre and Baffin Bay have been witnessing some above average tide heights from the end of June and on into July. Although they have scattered the fish from one end of the bay the other, the exchange of clean water from the Gulf is exactly what we need to fight back the brown tide. Yes, it is still hanging around, like crazy cousin Joe from your wife's side and just refuses to take a hint to go away. Much of the water has cleared, but deep into Baffin the brown tide still prevails. At this point, it is going to take a big tide from a tropical depression or hurricane to flush it out. Excluding a another push of Gulf water, our next best chance will be cold northern fronts, and we all know that is a ways down the road.

It has been unseasonably hot down here but it seems to affect us more than the trout. Regardless of the high heat indices, the largest trout have been in skinny water, like calf deep. Not the easiest to catch but, when they decide to take a lure, it is of the highest excitement in the skinny water. Had a recent trip where one customer and I worked a 100 yard stretch of potholes on some skinny flats, and we raised eight large trout, landing exactly half of them. They were teeing off on MirrOlure Fat Boys (Corky), and made for some of the most concentrated big trout action of the summer. This same pattern has proven itself over and over again as the sun gets high and bakes our once cool heads.

If numbers and action are more your game, schools of black drum and some reds are showing in good numbers in the general area of Bird Island and as far south as Nine Mile Hole (Graveyard). I rarely fish from the deck of my Haynie, but this is when I do a lot of it. Besides the quick hookups offered from these schools, the savvy trout angler will soon realize that there are some big trout hanging on the fringes of these schools - if you can be patient enough to keep your lure away from the reds (hard to do sometimes). Large trout deserve to be on a pedestal, but they are not below letting some other species buy them lunch and wash the dishes as they run in at the last minute for a quick meal of whatever is being served up. Calm August days offer ideal conditions for spotting the telltale signs of masses of fish bulging up the water as they congregate together.

Trout action is early for the most part. I'm typically departing Bluff's Landing Marina around 5:00 a.m. every day to catch the best trout of the first two hours of sunlight. Regardless of brown tide, I am almost always starting my days in Baffin for the initial flurry of action. Slicks remain to be the key indicator on where I will fish and, not a surprise, these areas will also be where I find the most bait to keep the trout within casting distance. After the sun gets high and the bite slows down you have a few options: For trout, you can go out deep and grind it out or, what I prefer, go skinny to seek out the largest fish (but you do run the risk of far less action). The next option is to go chase redfish. I prefer to go skinny for them as well, but then I love sight-casting. To me, sight-casting is the perfect combination of hunting and fishing. I get so into it at times that I have to remind myself that I have clients with me. Easy to get lost in it all when you are sliding quietly through the water looking for a shadow of a big trout or that orange glow of an unsuspecting redfish.

In closing, the fish kill that was blown up on the internet did exist; however, the kill was minor and mostly of shad. Personally, I only witnessed three dead trout during that time period, and those could have been due to bad handling, just no way to know. The reason is believed to have come from depleted oxygen levels that form during minor tidal movement and excessive heat, of which we have had both. Y'all get an early start, drink lots of water, and stay cool out there.