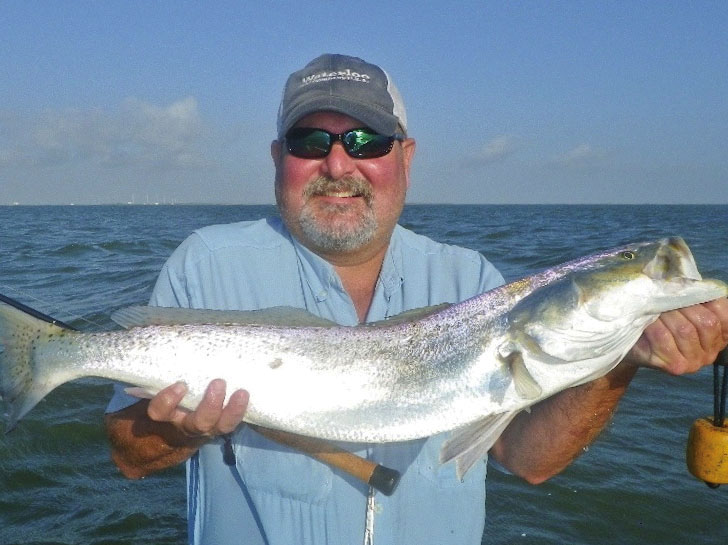 Tobin Stillwell with a great summer trout; 8.5lbs – 30 plus, on Red-Gold Shiner Bass Assassin. Released!
Mother Nature has thrown us some crazy curves this year. Prolonged winter turned into a breezy summer and I can only expect that the heat will remain until who only knows when. The upside is that the water clarity has improved dramatically through the summer. I'm not speaking of a small improvement; it is substantial. The interior of Baffin still has its issues with brown tide but the Land Cut to the JFK Causeway has amazing clarity that has enhanced our fishing by leaps and bounds. Catching has been better than average for me and my clients and I look forward to catching some healthy, egg-laden female trout in August.

August has the reputation of being a tough month to catch big trout. I will admit, when it's tough, it can be very tough but, the truth of the matter is that your best opportunity to catch a legitimate summer time pig is this month. When clients have specifically booked me to try and catch STAR trout, I have always told them that we need to book the trip in August. As previously mentioned, they are going through another spawn, there is a ton of bait in the bay for them to gorge on, and many of the weekenders have shut it down for the summer. As of this writing the current STAR-leading trout is 9lb-4oz. That is pretty strong, but certainly beatable for this area. On a side note, if you are choosing to take a large trout to a STAR weigh-in site, make certain as possible that it is 9lb-5oz or better. There is no need to kill 8 pound-plus fish for a gift card or tackle box. The good karma of C&R will come back to you tenfold.

Throughout summer our days start early. We are generally pulling away from Bluff's Landing Marina by no later than 5:30. The warm conditions of August require that you be in an area that you know is holding good fish at daybreak. As much of a believer as I am in solunar tables, the first crack of light in the morning, more often than not, will be your best chance of getting a big bite. If you are fortunate enough to have one of four feeding periods mixed in with it, you have no excuses for not catching (a bit of sarcastic humor).

A typical pattern for us is starting in an area that has shallow flats that break quickly into deeper water. Many areas of Baffin posses this setup, as well as many spoil islands that run along the ICW to the Land Cut. You will know you are in the right locale when you drift or troll in and the crest of the spoil or edge of the flats is covered with busy mullet. Our biggest bites, generally, are taking place right on the transition line from the shallow to the deeper water. As the sun gets up the food chain drifts into the deeper water and the game fish will be right behind them. When this takes place, we are switching from floating and suspending plugs to Bass Assassins rigged on a combination of 1/16 to 1/8 ounce jigs to plug the deeper waters where most of them will reside the rest of the day.
It is important to remember that fish have usually fed in the earliest parts of the morning and the bites are going to slow down. I tell my clients, "Fish are much like humans. They get their bellies full and they are not going to roll off the Lazy Boy to have another big plate of food. However, if you can get that Bass Assassin right in front of them, like mom walking by with a plate of cookies, you can make them eat again." (See also; grinding it out.)

So now that the sun is up and everything has almost gotten to be too much of a grind (for most), I like to switch gears and hit the flats for some sight-casting. Being the trout snob that I am, I love stalking the flats when the sun is high and looking for that one big, rogue trout that I know is up there. Even if we don't see her, there will always be some reds to stretch our lines. It is the perfect combination of hunting and fishing.