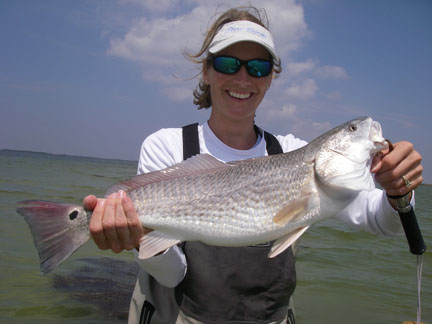 Mrs. Kelly Childress with big redfish.
When I think of wetting a line, it never occurred that I would be exchanging my Waterloo and Daiwa once a month for pen and paper. Although I have written a couple of guest articles for TSFMag, the thought never crossed my mind that I would be doing it on a monthly basis.

EJ (our editor) and I go back quite some time. I have always found him to be a gentleman, and a man I could discuss the most pressing issues with, whether it be fish, conservation, ducks, politics or women. EJ has always had steady and truthful talk with me, and that is something I have always admired. I sincerely look forward to many years of the same.

I was wading a flat in March '99 when I had a boat pull in a respectable distance away. Fishing was kind of slow and I was just easing along casting a pearl and chartreuse Corky when I got smashed by an 8 pound trout. I weighed the fish and cut her loose as discreetly as possible when I heard from behind me, "Good job, Bubba!" I acknowledged that I heard him and noticed his partner was coming toward me at an uncomfortable speed. I turned to make another cast and was crushed immediately by a second trout over 8 pounds. "Good job Bubba, great fish!" I turned and waved again after releasing my second great trout and noticed the silent guy closing the gap. I made a few empty casts before I was smoked by a third big trout. As I was about to land the fish I heard the voice again, "Do not take another step towards him or this trip is over."

I finished the morning releasing some really solid fish and then made my way to the boat. In passing the two guys, one of them walked over and introduced himself. Turns out it was Cliff Webb. I'd heard his name for years but never met him. He congratulated me on the great morning and we soon became fast friends.

Many things have changed in Baffin since our first meeting there, and Cliff's actions that day made a great impression on me; showing a sign of class that, more often than not, is fading away on the water.

The man I am replacing in this column is a legend on this part of the coast. Capt. Cliff Webb has done more, seen more, and been a part of more than most could ever fathom with regards to Texas inshore fishing. His retirement from guiding will not be a departure from fishing, as he told me he would still do charters on a limited basis with a select clientele. I wish he and Carol all the best in their travels, fishing, and surfing adventures.

Now for some fishing. By the time you get this it will be the start of my favorite time of year in Baffin and the Laguna. I hate all the extra clothes, but I love cold weather fishing. With each passing front the fish will become more predictable. December has always been a fantastic month for me and I am predicting this one will be better than most. High tides starting with Dolly came to maximum level with Ike, which has now been by fall equinox tide. These high waters have slowed the fishing, but the upside is that the bay has gotten a much needed flush from the gulf (as opposed to runoff), which should allow for great water clarity this winter and spring. A couple of strong fronts will knock the water level and temperature down to more traditional levels, and everything should fall into place.

I will be seeking out areas of the Laguna and Baffin that possess softer bottom, grass, and bait; the latter being the key ingredient. These areas can be found from the JFK to the Landcut and as far west as Riviera Beach. As a general rule, I will remain in the Upper Laguna during the higher tides, and slowly head toward Baffin as the water begins to fall. I know that may sound a bit vague, but most do not realize how much good water they are passing up by trying to be the first in Baffin.

My lure selection takes on characteristics of being a minimalist: Bass Assassins and top waters to start, and the original Corky and Fat Boy to finish them off.

I will go into more specific detail in January's issue with regards to these lures and which application is working best for me this winter.

Practice Catch and Release and utilize only the fish you will eat fresh. The bays are as crowded now as ever, and it safe to say that the demand is far greater than the supply. Be proactive and set some loose for the future.